A year after the beginning of the end for Clayton Kershaw

One year ago, Clayton Kershaw was entering a May 26 start against the Braves with a 4.32 ERA and a 2-3 record. Coming off winning the NL MVP Award in 2014, he had given up three runs or more in six of his nine starts. Despite relatively fine peripherals (73/16 K/BB in 58.1 IP), there was enough worry that the Twitter account for ESPN‘s ‘Baseball Tonight‘ famously posted a tweet wondering if it was the beginning of the end.

Is this the beginning of the end of Clayton Kershaw?

But this post isn’t about that tweet, which has been (rightfully) mocked to death over the past year. Rather, it’s just that the timing of that tweet serves as a convenient arbitrary endpoint from whence Kershaw started perhaps one of the best calendar year runs by a pitcher ever.

Among qualified pitchers in the past year, Kershaw leads in K% (by 3.3%), BB%, K%-BB% (by 4.5%), WHIP, FIP (by 0.78), FIP- (by 19%), and WPA (factors situational pitching), which is honestly a long way of saying that Kershaw is good at throwing the baseball. The elephant in the room within that run of stats is, of course, the ERA and ERA- marks to which Kershaw is actually second to Jake Arrieta. However, because of the amount of innings Kershaw has thrown, he still wins out in production when looking at both raw runs against and fielding independent metrics. 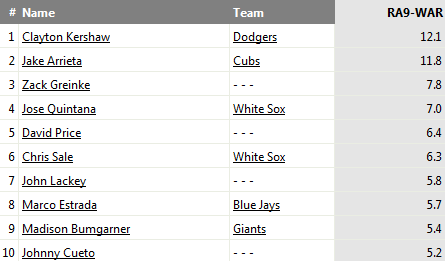 So yeah, Kershaw leads the league in FIP-WAR at 11.1, with the next closest competitor being Chris Sale at 7.4. However, even if you just want to look at run prevention in the past year, he leads Arrieta in RA9-WAR by a margin of 12.1 to 11.8.

The scary part about all this is that Kershaw has only been getting better rather than regressing. In 2016 he’s more than halved his walk rate and is thus on pace to blow away the K/BB record set by Phil Hughes, and his numbers so far on the year have him at a cool 1.48 ERA (39 ERA-) and 1.41 FIP (36 FIP-).

So while the question about Kershaw a year ago was about was about whether we were witnessing the beginning of the end of his dominance, it turns out that May 26, 2015 might actually represent the date where we started to see a somehow improved version of Kershaw from his previous form, and amazingly it’s one that happens to compare favorably to the best pitchers of all-time.