The Dodgers Need To Make Their Own Bullpen Luck

Depending on which numbers you use, the Dodger bullpen has either been decent or terrible this year. Neither answer is necessarily wrong. By context-neutral stats, their numbers are quite good. The Dodger bullpen ERA- is 84, the tenth-best in the MLB and fourth in the National League. The bullpen has a FIP- of 88, tied for ninth-best in MLB and third in the NL. By RE24, which tracks the “expected” run value based on ball-in-play events, the Dodgers are 11th in the MLB. All of these numbers are reasonable and better than expected.

In previous studies, past “clutch” does not correlate well with future “clutch.” This would indicate that the Dodger bullpen’s context-dependent stats like WPA are due to improve. In simpler terms: the general sabermetric belief is that the Dodger bullpen will stop blowing so many games. However, something like team clutch can be a little over-simplified. Some contextual decisions are important and should not be ignored. Let’s take a closer look at the Dodgers’ bullpen usage to see to what extent their “clutch” performance has been luck.

Here is a leaderboard of the seven Dodger relievers who have thrown more than ten innings this season. It’s sorted by a stat called “gmLI,” the leverage index when a pitcher enters the game. A higher value means a pitcher has seen higher leverage on average.

Things start off well with Kenley at the top, but numbers two and three feel out of place given what we know now about Hatcher and Baez’s skill levels. Of course, these decisions can change throughout the season, so let’s briefly give Dave Roberts the benefit of the doubt and see if he has learned from the results.

The following graph shows the Dodger bullpen’s gmLI. Each data point is a rolling average of the pitcher’s previous seven games, which helps smooth things out and shows trends in usage changes. The plot is a bit jumbled but you can click on it to make it bigger. 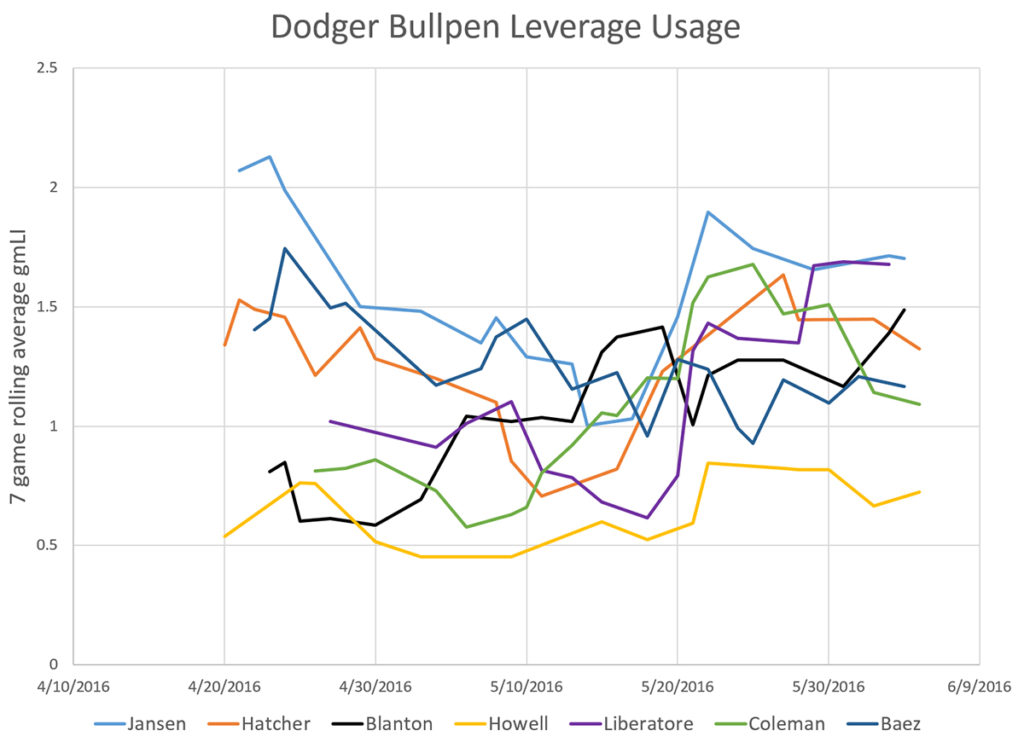 Let’s go through it color-by-color. First of all: Jansen (light blue line) is on top, but he hasn’t been all season. There was a period in May when he was used in the third or fourth highest-leverage situations. That’s not ideal.

Howell (yellow) is at the bottom and has been all season. He’s really struggled, so that’s not necessarily a bad thing. Blanton (black) started down in the same area, but in May the Dodgers started to realize that they could trust him and he’s climbed ever since. Coleman (green) has really climbed as well. He started in the same neighborhood as Howell and Blanton, but his ascent had surpassed almost everybody in the end of May. He has fallen back a little lately but you can still see how much more Roberts trusts him now than he did at the beginning of the year.

Liberatore (purple) has really ascended. Of late, he’s actually seen higher leverage situations than Jansen, after starting in the middle reliever role and falling briefly out of favor. Liberatore has lost velocity since last year, but with Howell struggling somebody needs to pick up the situational lefty role.

Baez (dark blue) clearly started the year as the second-highest leverage reliever. In the mid-May jumble, he lost his spot due to poor performance. He’s been holding steady around fourth or fifth lately, though it’s worth noting that he just pitched in the eighth inning of a one run game as recently as two days ago. A demotion was certainly warranted with his performance, and it seems that Roberts has other relievers that he now prefers.

That brings us to the elephant in the room: Hatcher (orange). Chris was the third-highest leverage reliever early in the season and was, frankly, terrible. He still has a FIP well over five, which is not acceptable for a major-league pitcher. Roberts understandably phased him out of high leverage situations. However, that line has been creeping back up lately. On May 19th, Hatcher recorded the highest gmLI of any Dodger reliever all season — bases loaded, two out, fifth inning, Dodgers winning by one, Leverage Index 4.68, Hatcher allowed a two-run single. The two outings after that began with well above-average leverage as well. Hatcher may be starting to fall out of favor, but it has not happened nearly quickly enough. His line is as high as it was at the start of the season. With other options emerging so quickly, it’s hard to figure out why.

So, yes, the Dodger bullpen has been unlucky. Perhaps we should have seen this recent rebound coming. However, the Dodgers can still make their own bullpen luck. Their leverage stats aren’t completely the fault of the baseball gods. If the team uses better pitchers in high leverage situations than they use in low leverage situations, the results will continue to improve. The Dodgers still haven’t properly demoted Hatcher, and until they do we can’t just cry “sequencing” when looking at the results as a whole. We can’t expect Roberts to cite gmLI in a post-game press conference or to manage perfectly by our preferences and things have been getting better lately, but the usage can absolutely be improved.

Daniel Brim grew up in the Los Angeles area but doesn't live there anymore. He still watches the Dodgers and writes about them sometimes.
@danielbrim
Previous Dodgers 12, Braves 6: Corey Seager is good at baseball
Next Podcast: ‘Dugout Blues’ episode 159 – Draft, Seager, Urias, injuries