Is this the real Trayce Thompson?

When the Dodgers made their 3-way deal with the Reds and White Sox in December, Trayce Thompson was seen as the third piece of the deal by most. Fast-forward 6 1/2 months and Thompson is not only the best player the Dodgers received, but he might be the best overall player in the deal.

It also raises the question: What if this is the real Trayce Thompson?

Here’s what I wrote about Thompson a couple days after the trade:

“Toolsy, athletic, raw — all those adjectives apply when talking about Thompson. He’s 6’3, 210 pounds, can run and play center field. It’s hard not to get excited with a profile like that. It’s Matt Kempish. But there’s a reason the 24-year-old was included in this deal.

He was pretty good in his MLB debut last season (.295/.363/.533), but that’s probably not the kind of player he’s going to be at the next level. Thompson has good bat speed and power potential, but he fails to make a lot of contact. He owns a .241/.319/.429 triple slash in seven minor-league seasons. His pitch recognition needs work if he’s ever to be anything more than a fourth outfielder/platoon player.

Lucky for him, the Dodgers could use a legitimate right-handed hitting center fielder to spell Joc Pederson on occasion. Thompson mashed lefties in the minors, so he’s a viable option to give Pederson a day off here and there (but Pederson should be playing against lefties most of the time).

Defensively, Thompson is a capable center fielder with a good arm. He can easily handle all three spots, but as long as Scott Van Slyke exists, Thompson probably won’t see a ton of time in the corners (this assumes everyone is healthy, which is a foolish assumption). He can also run, but don’t expect him to swipe 30 bases.

If he realizes his potential, Thompson has a chance to be the best player in the deal. That isn’t likely to happen, so he’s a nice complementary piece to the roster. He’ll probably land in the 15-20 range in my Top 100.”

The Matt Kemp-lite comparison isn’t completely crazy. There are a lot of similarities between Kemp and Thompson, though most of the similarities are physical — especially the finish on his swing at times. 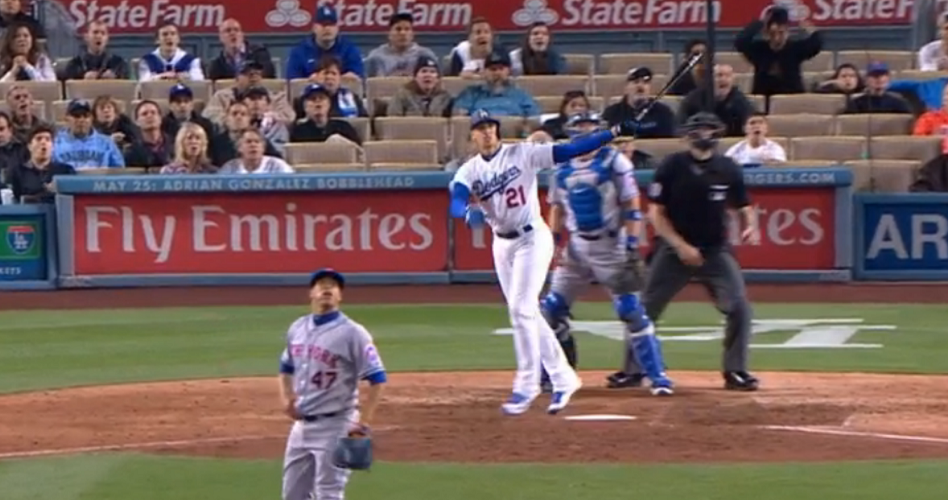 Not a mirror image, but pretty close.

Even if Thompson’s had his fair share of struggles in the outfield, everything else checks out. His triple slash this season (.270/.352/.548) is better than last season, his 145 wRC+ is nine points better than last year and would be the 24th-best in baseball (minimum 140 plate appearances), and his .278 ISO is even better in terms of MLB ranking at 11th-best.

Thompson isn’t benefiting from a high BABIP (.298), he’s walking at an excellent rate (11.3 percent) and he’s keeping his strikeouts down (23.2 percent). He’s also keeping both his swinging strike rate down (7.5 percent), as well as his outside-the-zone swing rate (20.1 percent).

That said, there are some points on the other side. Of course, it’s a small sample size. He has just 142 plate appearances this season after 135 in his rookie season. Also, his HR/FB% is at an unsustainable 32.1 percent, and it was half that last season. Plus, his line drive rate is also down 15 percent thanks to a massive increase in ground ball rate (from 38.5 percent in 2015 to 55.9 this season).

Yet the most important point in his favor is how his low chase rate combines with the fact that he’s crushing pitches in all parts of the strike zone except one. 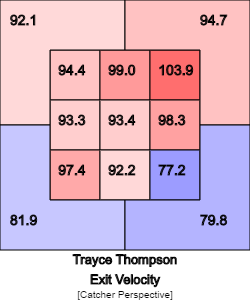 That’s what you want a quality hitter to do.

Now that Yasiel Puig is on the disabled list, Thompson is going to get the majority of the starts in right field. That makes Chad’s look at Thompson’s viability as a starting outfielder last month even more relevant.

“So all of that is wonderful and Trayce Thompson is a perfect solution in left field, right? Well, maybe.

Even this year, despite his hot start, he’s still only walking 6.5% of the time and striking out 26.0% of the time. Yasiel Puig gets a ton of crap for his lack of plate discipline, but he’s never posted numbers that bad over the course of a season. Of course, none of that matters if Thompson continues to hit for power, which is why the fact that he’s hitting 48.1% of his balls in play on the ground and that 31.6% of the fly balls he does hit are currently going for homers is a bit concerning. The latter number is sure to regress simply due to the fact that he’s probably not the best power hitter ever, and the former number means he doesn’t hit enough fly balls for his power to play consistently.

As such, Thompson’s explosive little run aside, there are indeed many concerns in regards to his future to go along with the immense promise. Given the red flags, it’s fortunate then that everything is trending in the right direction as of now.”

The red flags are certainly legitimate, but he has also worked to answer some of those questions thus far.

I am not saying Thompson is the second coming of Kemp. I am not saying he’s going to be a 150 wRC+ player. I am saying he might very well be more than just the right-handed platoon outfielder folks (like me) originally thought. And this stretch with Puig out and Andre Ethier still absent will go a long way to showing folks just what the 25-year-old outfielder can do.

Dustin Nosler began writing about the Dodgers in July 2009 at his blog, Feelin' Kinda Blue. He co-hosted a weekly podcast with Jared Massey called Dugout Blues. He was a contributor/editor at The Hardball Times and True Blue LA. He graduated from California State University, Sacramento, with his bachelor’s degree in journalism and a minor in digital media. While at CSUS, he worked for the student-run newspaper The State Hornet for three years, culminating with a 1-year term as editor-in-chief. He resides in Stockton, Calif.
@DustinNosler
Previous Rockies 6, Dodgers 1: ONE GODDAMN HIT
Next 2016 MLB Draft Profile: OF William Benson, The Westminster Schools (Ga.)