Adrian Gonzalez’s power outage is concerning, as is his increased GB rate

Adrian Gonzalez is no longer a power hitter. At least, that’s what the numbers say. And in a time and on a team that desperately needs it, its absence has been painstakingly apparent.

Jeff Sullivan at FanGraphs looked at this yesterday. I’m not going to try to 1-up him because he’s one of the best baseball writers out there. I’m going to go a little deeper to see if the issues(s) can be pinpointed.

Prior to this seasons and since coming to the Dodgers, Gonzalez has hit 80 home runs. In his first three full seasons, he hit 77. He also had 116 and 110 doubles, respectively. This season, he has just six home runs and 10 doubles. He’s second on the team in plate appearances, so it isn’t like he has missed a lot of time this season.

In terms of isolated power, he has fallen off a cliff. 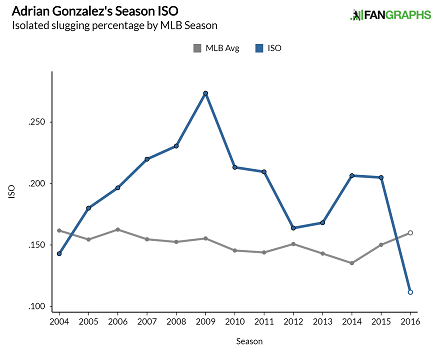 Yikes. From 2013 through 2015, Gonzalez had a .193 ISO, which is well above league-average. This season, that number has plummeted to .112, well below-average. There are a few causes for this. The most obvious is the fact Gonzalez — whether he’d admit it or not — is not 100 percent healthy. He had a back issue earlier in the season that required a shot, and it’s apparent he is not swinging the same way he’s used to. Some would say he’s trying to beat the shift, but one of the most consistent players in baseball over the last 11 years isn’t going to suddenly change the way he hits the ball just to beat a shift.

If the “no shift” numbers look a little round, it’s because they are. He has just 50 plate appearances against “no shift” defense, compared to 135 against the shift, but he does try to go the opposite way more when the shift is on. That might be where his offensive profile ends up before the end of his career, but right now it sure seems as if that adjustment is because he doesn’t feel healthy and is just trying anything to still produce. After all, he’s a power hitter, so if he can still turn on fastballs, he needs to do so. Thing is, he’s hitting just .263 on pitches faster than 90 MPH this year.

A second reason his power has disappeared could simply be age. He is in his age-34 season and a decline was bound to happen. I don’t think most expected it to happen this quickly, though. He’s in pretty good shape for a veteran first baseman, but Father Time is undefeated.

The most glaring reason for his decline — possibly on account of a sore back — is Gonzalez’s ground ball rate. It has skyrocketed this season. Of his batted balls, 52.6 percent of them have been hit on the ground, while his career rate is 40.7 percent. In 2013-15, it was 38.2, 38.4 and 37.3 percent, respectively. This is due to his launch angle decreasing dramatically.

Gonzalez’s average launch angle this season is 7.5 degrees, while last season it was 14 degrees. Line drives are classified as balls hit between 10 and 25 degrees. And while his exit velocity is down just slightly (from 89.2 to 88.9 MPH), his results have been significantly impacted by the launch angle. A search on Baseball Savant for batted balls at less than or equal to 8 degrees and less than or equal to 89 MPH have a .134 batting average. One. Thirty. Four. In terms of ISO, that number is .013, which isn’t surprising because the lowest recorded launch angle for a home run is 11 degrees (by Giancarlo Stanton, because of course it is).

Basically, everything is tied to his back and ground ball rate. His home runs per fly ball isn’t down that much from 2015 (16.4 to 12.2 percent), and his home runs are traveling almost the exact same distance (396.7 this year, 396.6 last year). His average fly ball distance is 52nd-best in baseball at 297.97 feet, while he was 20th last season at 302.79 feet. It’s a 5-foot difference, but it isn’t that big a difference when it comes down to it. When he elevates the ball, the good things that happened last season tend to happen again. The problem is just that he’s elevating the ball at a career-worst rate.

If he’s truly hurt, he needs to speak up. His batting balls into the ground at the MLB average exit velocity isn’t going to do the Dodgers much good. With Scott Van Slyke and Yasiel Puig back, there are plenty of options to spell Gonzalez at first base (SVS, Howie Kendrick, Chase Utley, just to name a few). While A-Gon hasn’t ever played fewer than 156 games in a season, I’ve been saying he needs to be more in the 140-145 game range to remain effective (especially as he ages). He has two more years remaining on his contract and likely isn’t going anywhere, and if his back isn’t healthy, playing through it probably isn’t going to fix it.

Dustin Nosler began writing about the Dodgers in July 2009 at his blog, Feelin' Kinda Blue. He co-hosted a weekly podcast with Jared Massey called Dugout Blues. He was a contributor/editor at The Hardball Times and True Blue LA. He graduated from California State University, Sacramento, with his bachelor’s degree in journalism and a minor in digital media. While at CSUS, he worked for the student-run newspaper The State Hornet for three years, culminating with a 1-year term as editor-in-chief. He resides in Stockton, Calif.
@DustinNosler
Previous Dodgers 3, Nationals 2: Yasmani Grandal’s dinger gets Dodgers improbable win
Next Nationals @ Dodgers June 22, 2016: Julio Urias’ Last Start For Awhile? (EDIT: Nope)