The 2015 Home Run Derby was radically different from the contests that preceded it. Rather than having rounds based on “outs,” the rounds were timed. Therefore, participants could take as many hacks as they wanted.

A full list of the rules, via MLB.com’s A.J. Cassavell: 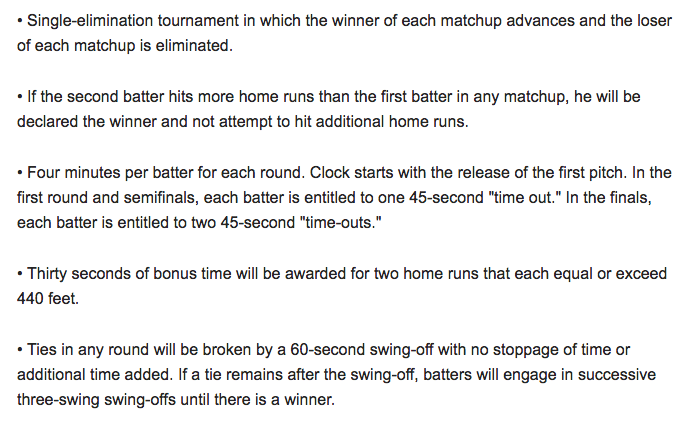 And here’s this year’s bracket:

Corey Seager will be up against Mark Trumbo in the first round. Trumbo hit three of his league-leading 28 home runs in last week’s series at Dodger Stadium.

On facing Trumbo, Seager said, “I’m in trouble. I’m in a lot of trouble,” with a laugh. “You always want to win, but … it’s gonna be fun playing with the guys, hanging out with the guys. It’s just gonna be a good time.”

Jeff Seager, Corey’s father, will pitch to the Dodgers rookie. According to Corey, his dad throws to him every offseason.

Joc Pederson came in second place in last year’s Home Run Derby, finishing just one home run behind Todd Frazier. Pederson discussed his experience with Seager, and Seager relayed that conversation: “He said it was fun. He said just to enjoy it. He said don’t worry about getting tired, don’t worry about all that other stuff.”

Coverage of the derby starts at 5 PM Pacific on ESPN, though who knows what that means for when they’ll actually get to the DINGERS.

Sarah Wexler is a native Angeleno and longtime Dodger fan. She began blogging about baseball in 2012 on her Tumblr, New Grass On The Field, where she covered an array of topics but especially enjoyed exploring baseball history. She is now a reporter/producer for MLB.com. She earned her master's degree in Sports Management from Cal State Long Beach. She graduated from New York University in 2014 with a bachelor's in History and a minor in American Studies. She's an avid Springsteen fan, which is a big boost to her baseball writer cred.
@sarahwexler32
Previous 2016 Dodgers Prospects: Midseason Top 30 update
Next Yasmani Grandal’s value goes beyond his batting average