The Upside of Rich Hill

Yesterday the Dodgers gave up some real talent for Josh Reddick and Rich Hill, two rental players. This post is going to focus on the Rich Hill part of that deal. The Dodgers needed rotation help, and Hill obviously carries tremendous risk.

He’s been battling a blister for almost a month. Before that, he had a groin injury. The last (and only) time Hill has thrown more than 100 major-league innings was in 2007. He’s had Tommy John surgery, had a shoulder labrum repaired, suffered a pronator injury, had back problems, and many muscle issues. Last year, he pitched for the Long Island Ducks, an independent league team. His indie-league debut was one year ago today.

And yet, this 36-year-old left-handed pitcher could well be the best pitcher traded at this year’s deadline, and may be precisely what the Dodgers need. It’s worth looking past the risk for a moment to see what the Dodgers could get in a healthy Rich Hill.

The Red Sox signed Hill out of independent league ball last August to help fill some innings as they stumbled to another last-place finish. Hill rewarded their signing with four brilliant starts, striking out 39 batters and walking five in 29 innings. He was able to get a one year, six million dollar contract from the A’s to see if that brief performance wasn’t a fluke. Jon Heyman reported that the Dodgers were interested in matching the A’s contract, but Brett Anderson accepting the qualifying offer forced their hands. Hill has done all he can to prove that he is for real this season, putting up another 76 excellent innings for Oakland. He’s walking more batters than he did in his 2015 campaign, but he’s still missing a lot of bats.

If you haven’t been paying attention to the A’s or Hill (understandable) you might have missed just how great he has been. Over the last calendar year, here are MLB’s ERA- leaders with at least 100 innings pitched:

If you’ve read this site for long enough, you know that 100 innings of ERA isn’t particularly reliable, but Hill’s success goes beyond that. Here are MLB’s best FIP- marks among the same pitchers in the same timespan:

If you want to look past even FIP, the best way to do that now is DRA, Baseball Prospectus’ pitching metric. DRA models events like the ballpark and temperature on a certain day, individual batter results, and other factors, which creates an ERA estimator. It’s a better approach to solve contact quality problems than xFIP, and has been shown to be as reliable or more reliable than FIP (though it’s more difficult to explain why a pitcher is ranked in a particular way). BP does not have a “last calendar year” split tool, but since Hill’s return his DRA- is about 76, which would rank him among the top 10 starting pitchers in either 2015 or 2016.

Explaining Hill’s dominance in fundamental pitching terms is not that difficult, either. Below is a plot with all 134 pitchers with at least 70 innings this season. On the X axis is a pitcher’s in-zone swing rate (how often does a batter swing at a strike). Lower values are better. On the Y axis is a pitcher’s overall contact rate (when a batter swings, how often does he hit it). Again, lower values are better. These aren’t the only two ingredients of pitching (it wouldn’t really show control problems), but if a pitcher is good at these two things he’s on the right track. 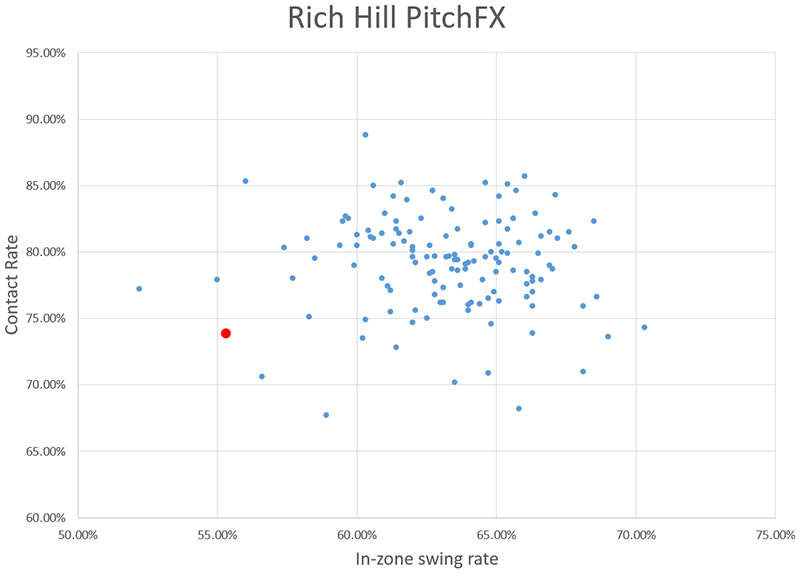 Hill is nearly on his own on the lower-left, right where a pitcher would want to be. He’s third-best in in-zone swing rate, and he’s tenth-best in overall contact rate. There aren’t really many signs in this limited sample that Hill is due to regress.

This brings up the other part about Hill worth mentioning: his unique path to success. Hill has frequently been a two-pitch guy, back to his years as a bad reliever and a mediocre starter. There were years when he’d mix in a two-seam fastball, but he hasn’t relied heavily upon a slider or changeup in the entire PITCHf/x era. He would frequently tinker with release point and usage, but had trouble finding the strike zone which reduced the impact of his good strikeout rates.

The curious thing is that Hill’s repertoire change has really made his fastball play up. Among the 151 starting pitchers who have thrown at least 200 fourseam fastballs this season, here are the top whiff/swing rates:

Hill’s fastball leads starters and does so by a gigantic margin. For comparison, Clayton Kershaw is 20th at 22.5%, Jose Fernandez is 16th with 23.4%, and Noah Syndergaard is 18th with 23.1%. Rich Hill gets 1.5x more whiffs per swing on his fastball than Noah Syndergaard, who averages 99mph. If relievers are added to that list, Hill falls to a tie for second (behind Carl Edwards of the Cubs and matching Justin Wilson of the Tigers), but he’s still one spot ahead of Aroldis Chapman‘s famous 101mph offering. Hill is also inducing a higher rate of swings on his fastball than he did previously. It’s a devastating combination.

Hill’s fastball is not a bad pitch at 91 from the left side and gets the benefit of excellent horizontal movement resulting from good spin. Plus, batters don’t see it as much, which can improve results if they’re sitting on the curve. Hill’s curve has a superlative spin rate which translates into the fifth-best horizontal movement and 14th-best vertical movement among starting pitchers. When betters do make contact, they hit the curve on the ground 65% of the time, enough to reduce the impact of batted balls.

One potential drawback to this unique pitching style is that it may not work well as a pitcher goes through the order multiple times, but since Hill’s return the story isn’t clean:

If anything, Hill’s results get better as he goes through a lineup more than once. The strikeout/walk numbers don’t follow a pattern and the in-play results improve steadily as he goes deeper into games. Previous times through the order results do not predict future times through the order results well, but these data show that this has not been an issue for Hill so far. In his 17 post-return starts (removing the most recent blister-shortened affair), Hill has averaged more than six innings pitched per start. He has only failed to get through six innings three times. In a Dodger rotation struggling to get innings out of their starters, a healthy Hill is an outstanding leg up.

When healthy, Rich Hill is one of the best pitchers in baseball, and there are no signs of rapid decline. It still could come at any moment because he’s old, but if that taper is gradual and he’s suddenly a number two starter, the Dodgers will absolutely take that. Hill has earned his performance, and is playing for what could be a sizable contract this winter. The injury risk is tremendous, he could remember that he’s old and pitch worse, but the Dodgers went and acquired the best pitcher available, warts and all.

Daniel Brim grew up in the Los Angeles area but doesn't live there anymore. He still watches the Dodgers and writes about them sometimes.
@danielbrim
Previous Dodgers bet on regression in exchanging Yordan Alvarez for Josh Fields
Next Dodgers @ Rockies August 2, 2016: New Friends