Cause of Brandon McCarthy’s command struggles not apparent

Brandon McCarthy sounded extremely frustrated after his outing on Sunday against the Red Sox, and rightfully so. He lasted just 3 2/3 innings and walked five hitters. It was one of his worst outings of the season.

In post-game interviews, the frustration was apparent.

“‘This is going to be the least amount of answers you can possibly give because I just don’t have them right now,’ McCarthy said. ‘Four-seamer [fastball], I just can’t feel what’s happening. It’s a disappearing mess. I’ve got to figure it out soon. I’m as surprised as the hitter and the catcher as to where the ball’s going.'”

That’s not good. A dive into the data doesn’t exactly reveal many answers, either. Dave Roberts has said he and Rick Honeycutt think it’s a mechanical issue. Hopefully that’s all it is.

McCarthy’s fastball velocity has dipped a bit, but that doesn’t really explain the lack of command or the fact it’s “disappearing” on him. It was down to 91.6 MPH on Sunday — a season-low — which can be explained by the lack of feel for the pitch. But when you look at horizontal and vertical release points, nothing really stands out. 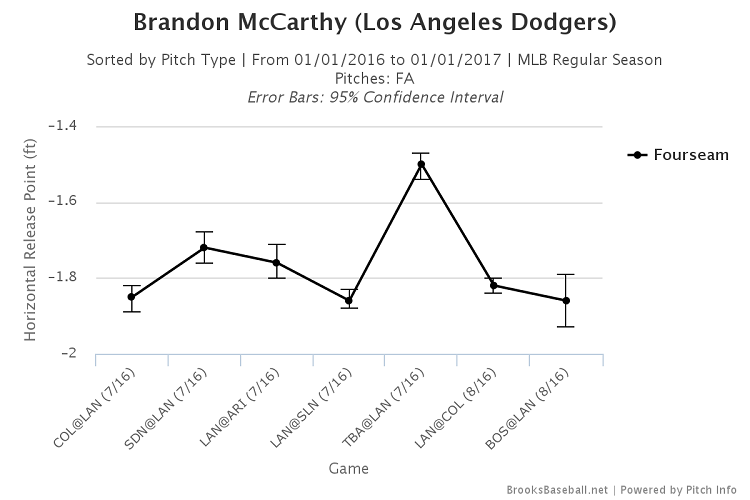 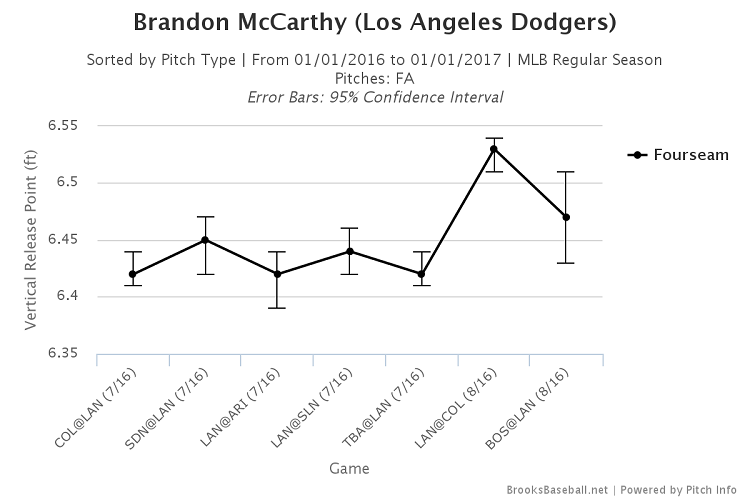 And when you look at the scatter chart, it’s even less apparent what the issue is. 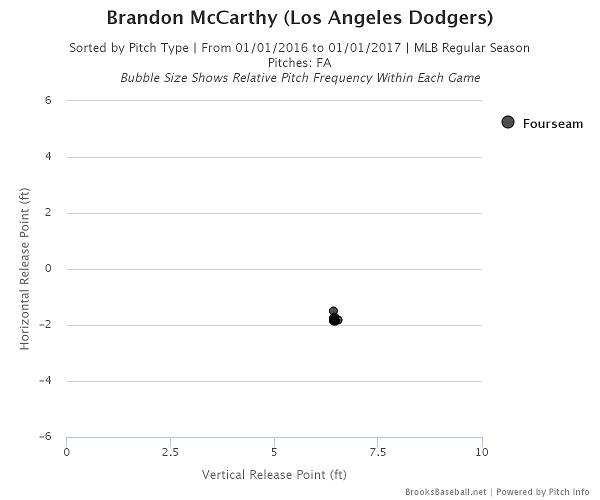 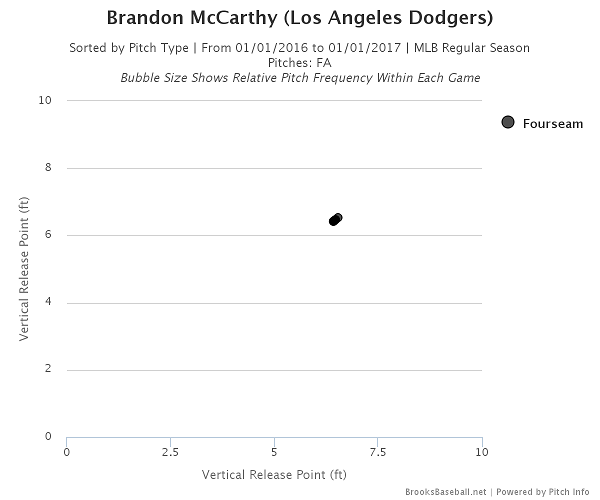 He was all over the place in his previous start against Colorado, but the results weren’t as concerning as they were on Sunday (that’s not to say he pitched well, but he wasn’t as concerned or frustrated as he was after the Boston game). This doesn’t exactly support the whole “mechanical, not physical” line, but that’s where scouting and years of experience come into play over the available data.

This could all be tied to his recovery from Tommy John surgery. It could all be in his head. Whatever the issue is, the Dodgers need McCarthy to figure it out sooner rather than later. When he’s right, he’s one of the two- or three-best starters on the team. If he’s closer to the guy we’ve seen the last three starts, he might not even get consideration for the postseason roster.

The Dodgers need innings from their starters. McCarthy isn’t exactly known as a workhorse, but he stands about as good a chance as any starter in the rotation of being that guy. We’ll see what happens.

Dustin Nosler began writing about the Dodgers in July 2009 at his blog, Feelin' Kinda Blue. He co-hosted a weekly podcast with Jared Massey called Dugout Blues. He was a contributor/editor at The Hardball Times and True Blue LA. He graduated from California State University, Sacramento, with his bachelor’s degree in journalism and a minor in digital media. While at CSUS, he worked for the student-run newspaper The State Hornet for three years, culminating with a 1-year term as editor-in-chief. He resides in Stockton, Calif.
@DustinNosler
Previous Corey Seager a lock for Rookie of the Year and bonafide MVP candidate
Next Pirates @ Dodgers Aug. 12, 2016: Ivan Nova vs. Ross Stripling