Julio Urias is getting better, but it’s almost time to shut him down

After Saturday’s performance it was confirmed: Julio Urias is really, really good. It wasn’t much of a question to some, but there were others who wondered if the kid was worth all the hype. Turns out, he was.

If you filter the leaderboards to include him, he’s an elite starting pitcher. In 57 1/3 innings (12 starts), Urias has a 2.92 FIP. That is the fifth-best mark in all of baseball (with Clayton Kershaw and Rich Hill checking in at Nos. 1 and 4, respectively). His 25.4 percent strikeout rate would be 17th-best in the majors, and he’d be flanked by Justin Verlander at 16 and Danny Duffy (who, if you didn’t know, is really good) at 18. That also translates to a 10.05 K/9 (64 strikeouts), which is better than Madison Bumgarner and Drew Pomeranz.

The kid is incredible. He’s doing all this in his age-19 season (he turned 20 on Aug. 12), but just as he’s getting on a roll, it’s just about time for the Dodgers to shut him down. He sits at 108 innings pitched on the season between Triple-A and the majors — 20 1/3 innings more than his previous career-high. When he was optioned to Triple-A after his first MLB stint, I wrote about how his development must take priority.

“But back to Urias. If the organization wasn’t going to use him in the majors as a starter, then sending him back to Triple-A was the right move. I’ve been critical of the org has handled his development since last year. It hasn’t done the best job with Jose De Leon and Ross Stripling this season, either. But Urias getting starters’ innings at Oklahoma City is much better than pitching once or twice a week in the majors for 1-2 innings.

There is an innings cap on Urias this season of anywhere from 100-120 innings. If you go by the Tom Verducci rule (30 percent increase from previous season), that would be around 105 inning. His career-high is 87 2/3 innings (2014 as a 17-year-old) and he’s already at 77 1/3 in 2016. That gives him, at best, about 43 more innings (if his cap is 120). That’s roughly 8-9 starts of 5-plus innings. The one thing the Dodgers cannot do is completely shut Urias down midway through the season only to have him ramp it back up for the end of the season and the chance to contribute to the MLB team out of the bullpen. That would not make sense.”

If you want to increase his workload 30 percent over his previous career-high, that works out to 114 innings. In theory, he has six innings remaining this season, and while he’s physically mature enough that he could probably be pushed to 120 innings overall, that’d be the maximum for me.

Most importantly, Urias is probably feeling the impact of a significantly increased workload, as his velocity across the board was down on Saturday and his fastball velocity has been trending down since his relief appearance on Aug. 3 in Colorado. 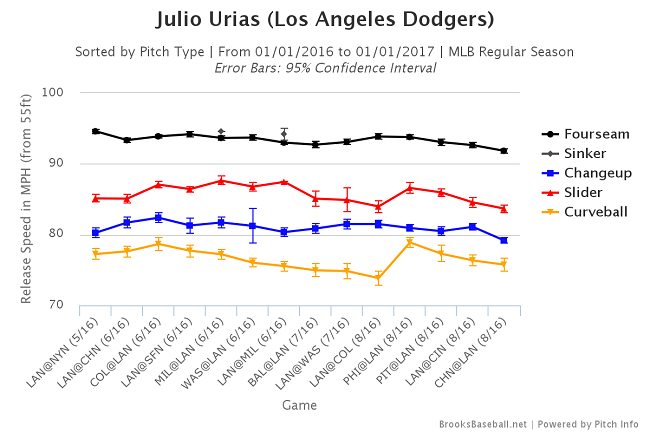 Despite the decreased velocity, his outing on Saturday was one of his best, especially after it started with a 30-pitch first inning against the best team in baseball. But just like I wrote about early last month, Urias’ development must take priority. In this case, his future must take priority. It’d be nice if he were stretched out and ready to pitch 150 innings, but his situation is so unique that it was hard to handle his development to get to that point. If he didn’t have elective cosmetic surgery last year, perhaps he’d have an additional 20 innings left in the tank, but as it stands right now, Urias might have another couple starts in him. And no, there’s no chance I’d move him to the bullpen to get more appearances out of him. That wouldn’t do anything for his development.

This is not another Stephen Strasburg situation. This is a Julio Urias situation.

Dave Roberts said Julio Urias will stay in #Dodgers rotation for now. Next start TBD "But things can change"

This has been the MO with Urias in the majors this season, except his next start is guaranteed, even if it’s “to be determined.”

It’s a bummer that Urias won’t be pitching for this club down the stretch or in October given that he has been so incredible this season after a couple of hiccups early on. But what he has done so far is just a glimpse of things to come in the future, so the Dodgers need to give him the best chance to have one.

Dustin Nosler began writing about the Dodgers in July 2009 at his blog, Feelin' Kinda Blue. He co-hosted a weekly podcast with Jared Massey called Dugout Blues. He was a contributor/editor at The Hardball Times and True Blue LA. He graduated from California State University, Sacramento, with his bachelor’s degree in journalism and a minor in digital media. While at CSUS, he worked for the student-run newspaper The State Hornet for three years, culminating with a 1-year term as editor-in-chief. He resides in Stockton, Calif.
@DustinNosler
Previous Dodgers 1, Cubs 0: Brock Stewart wins duel with Jon Lester, as expected
Next Dodgers @ Rockies August 29, 2016: Rain precedes final series at Coors