The Dodgers go for their fourth straight win and a series victory over the D-backs on Tuesday night at Dodger Stadium. They flexed their muscles and roughed up old friend Zack Greinke in shocking but enjoyable fashion on Monday, leaving them with a season-best four-game lead over the Giants in the N.L. West and 17 games above .500.

Greinke was great with the Dodgers, but now he’s a snake. So…I hope they wallop him.

Ask and you will receive.

Remember when some theorized Arizona was going to win the division behind Greinke after they signed him in the offseason?

Anyhow, the Dodgers will have a prime opportunity to gain even more ground in the standings when they take on Shelby Miller and the D-Backs in the second game of the series.

Ross Stripling (3-6, 4.15 ERA, 3.82 FIP) has not won a game since August 6 vs. Boston, but his ERA does not reflect his importance to the team this year, as he’s pitched admirably in multiple roles.

Last time out at Coors Field, Stripling allowed three runs on nine hits over six innings in the first game of the torturous Denver doubleheader. Aside from the inevitable disaster that typically occurs when starting at Coors (unless you’re Hideo Nomo or Kenta Maeda), he has lasted at least five innings in his last five starts since slotting back into the Dodgers rotation. The right-hander has faced the D-backs twice this year, one outing as a starter and reliever each. He’s still looking for his first career win against Arizona.

Stripling has held left-handed batters to a .217 average, and he’s only given up two home runs to lefties. But he’s served up four home runs in August, one more than the total he allowed through his first twelve games with the Dodgers. His undisclosed innings limit may also be approaching, and with Clayton Kershaw and Scott Kazmir expected to return soon, Stripling could step aside.

In the regular season this year, however, he is 1-1 with a 6.57 ERA in five games (three starts) against the Dodgers in his career. His ERA is over seven in three games at Dodger Stadium, where he has allowed nine runs on 15 hits in 11 1/3 innings. Adrian Gonzalez has five hits including a homer in his 10 at-bats against Miller.

After Miller was traded to the Braves in exchange for Jason Heyward, Miller has been up and down. Even though he finished 2015 with an abysmal record of 6-17, he was named to the N.L. All-Star team and collected a career-high 171 strikeouts in 33 starts. A change of scenery didn’t help, and in 2016 his home-run percentage is higher than ever at 3.8%, his strikeouts are down 15.4% and his walks are up 10.1% with the D-backs.

Miller’s two-seam fastball has virtually vanished this season, a pitch he used more than one-third of the time with the Braves last year. In 2015 with the Braves, he threw the cutter 21.7% of the time with some curveballs (9.8%) and a spattering of change-ups (1.9%). This season, he has only thrown his sinker 9.3% of the time, relying more on his four-seamer, with an uptick on his change-up usage (7.1%). Without his sinking fastball, along with some control issues along the way, opposing batters hit him hard earlier in the season before the demotion. 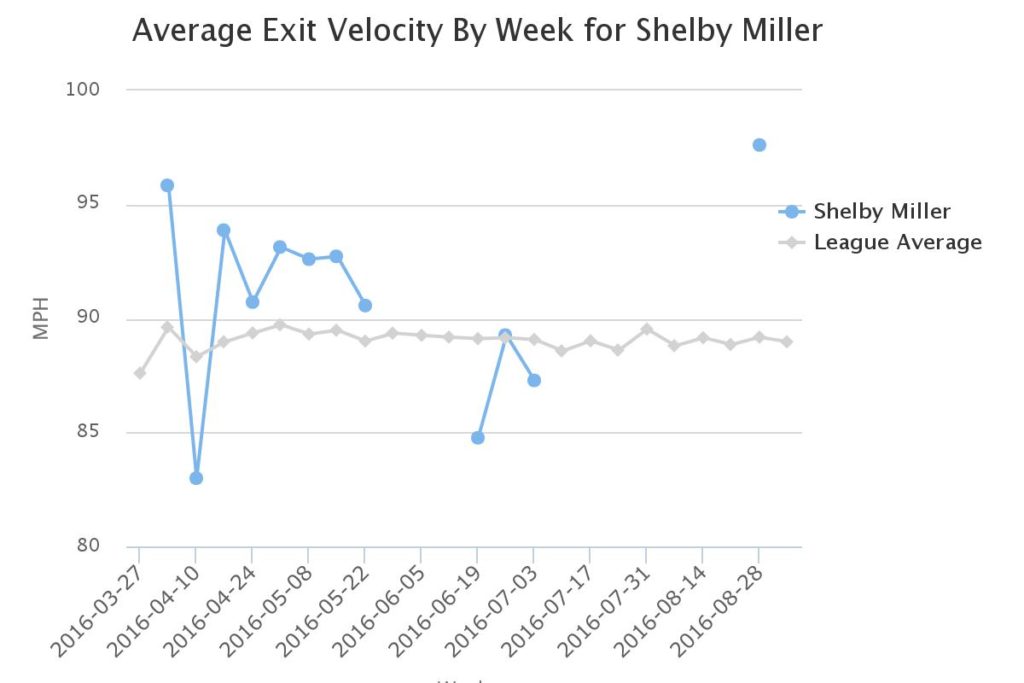 Once a promising pitching talent, Miller is trying to find success again by finishing up 2016 on an optimistic note. The right-hander was recently called back up after spending some time in the minors, and he went 7-1 in 10 starts with a 3.30 ERA and 74 strikeouts in 62 2/3 innings between High-A Visalia and Triple-A Reno. The D-backs hope that his demotion this season helped reset him both mechanically and mentally. Arizona would like Miller to use the final month of the season to set himself up for a resurgent 2017.

The Miller trade, coupled with the disappointing season at Chase Field for Zack Greinke, really sums up Arizona’s fail of a season. If Miller isn’t able to contribute consistently, sending No. 1 overall draft pick Dansby Swanson, Ender Inciarte and Aaron Blair to Atlanta could go down as one of the worst trades to date for Arizona.

In other news, Pedro Baez was recalled by the Dodgers on Tuesday, and Brock Stewart is also in town ready to be activated for the series finale. There’s also some good news about the return of Alex Wood.

The Dodgers lit Greinke up like a Christmas tree in the series opener, so it would make sense that they get shutout by Miller.

Stacie Wheeler, born and raised in So Cal, has been writing about the Dodgers since 2010. She wrote daily as the co-editor of Lasorda's Lair for five long years, and she has also written for Dodgers Nation, Dodger Blue 1958 and The Hardball Times. She currently contributes to True Blue LA. Stacie graduated from the University Of Southern California with a bachelor's degree in Cinema-Television. You can also watch her videos on her YouTube channel, DishingUpTheDodgers.
@StacieMWheeler
Previous 2016 Dodgers’ Minor League Players of the Year
Next Dodgers 5, D-Backs 2: Good thing Shelby Miller still isn’t fixed