The Dodgers recently announced that they will send eight players to the Arizona Fall League to play for the Glendale Desert Dogs, including position players Cody Bellinger, Alex Verdugo, Willie Calhoun, and Tim Locastro, along with pitchers Chris Anderson, Joe Broussard, Ralston Cash, and Corey Copping.

After starting the season injured, Bellinger surged late in his age-20 season that was split between AA and AAA, putting up a .271/.365/.507/.872 line, including 26 homers and a 94/60 strikeout-to-walk ratio. Better yet, while he was relatively consistent from May to July with OPS totals of .782, .798, and .798, in August he exploded to .979 and September was even better at 1.481. Bellinger also showed no signs of suffering against lefties, posting a .927 OPS against them versus .854 against righties. As Bellinger is a plus defender at first and can even play center field, if the bat plays, he certainly looks the part of an MLB first-division regular.

Verdugo was also in his age-20 season, and he also played it out at AA, speaking to his advanced approach and plus bat-to-barrel skills. He wasn’t as successful statistically, posting a .273/.336/.407/.743 line with 13 homers, 44 walks, and 67 strikeouts, but he looked a lot better than the line suggests. Rarely did Verdugo look overmatched at AA, and he’s not far from being a finished product, so if he has a strong AFL season, it wouldn’t surprise me if they just promoted him to AAA next year anyway.

Calhoun spent his age-21 season in AA and answered some doubters by putting up a .254/.318/.469/.788 line with 27 homers, 45 walks, and 65 strikeouts. But there were doubters to begin with, and Calhoun is always going to be a polarizing prospect because he doesn’t look the part. While the athleticism is lacking, and he’s gonna have a struggle ahead to become a MLB-caliber second baseman, the bat is real and so is the power. Calhoun does have an .844 RHP/.575 LHP split, so that could be another pitfall for him, but if the bat continues to progress it’ll be hard to avoid giving him a shot to be a regular.

Locastro was acquired from the Blue Jays for international slot money along with Chase De Jong (who looks like a legit prospect, by the way), and he’s actually been quite surprising. Yes, he split his age-23 season between high-A and AA, but he was productive, posting a .285/.341/.389/.729 line. Locastro probably won’t be seen as a legit prospect, but his potential value as organizational depth stems from the fact that he has played second base, shortstop, center field, left field, and first base.

Anderson is a 2013 first-round pick of the Dodgers, and he has taken steps backward in two consecutive years now. After striking out 146 batters in 134.1 innings in 2014, he only struck out 100 in 133 innings in 2015, and the results were consistently mediocre. In 2016, now coming mainly out of the bullpen in his age-23 season, things got worse as he split time between high-A and AA. Despite now coming out of the pen, he struck out only 51 in 67.1 innings, and now he also walked 46. While his control was always a problem, it had never been this poor, and there were reports that his once explosive fastball had disappeared. Quite frankly, Anderson is running out of time to salvage a once promising career, and a solid AFL season to segue in 2017 would be a start.

Broussard was already in his age-25 season this year, but while he started the year at high-A and spent most of his time split between there and AA, he also ended the season at AAA. The promotions were well deserved, as he put up a 1.80 ERA across three levels, striking out 81 in 70 innings while walking just 16. It’s hard to project somebody who will be 26 next year to be a bullpen prospect in a system filled with premium arms, but he’s worth monitoring and I think that’s why he’s included here.

If nothing else, you should know Cash because of his exquisite mustache. 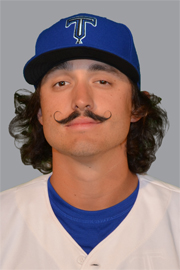 And he’s also turned out to be a decent relief prospect as well. 2016 was his age-24 season, so like Broussard it’s getting to that make-or-break portion of his career, but he did post a 2.87 ERA and a 84/33 K/BB ratio in 69 innings split between AA and AAA. Cash isn’t a top prospect, but the Dodgers probably want to test him out and/or showcase him in the AFL.

Copping is in his age-22 season and spent his 2016 splitting time in relief between Rookie-ball and high-A. He only threw 28 innings, getting mediocre results (4.50 ERA), but the 2015 31st-round draft pick did strike out 35 batters despite walking 13. Never really seen his name pop up this year as somebody to watch, so it’ll be interesting to see him in the AFL.

For those that want to keep track of Arizona Fall League play, things actually kick off already on Oct. 11 and it runs for a little over a month until Nov. 17.