Last year, former weblogger Mike Petriello wrote about Luis Avilan and how he was the best in baseball at limiting exit velocity from his pitches. In 134 batted ball events last season, Avilan allowed an MLB-best 81.4 MPH exit velo.

Here’s how Mike concluded the article:

Well, Avilan did it again.

In 100 fewer BBEs (which means something, as Avilan spent most of the season in Triple-A), he again allowed an 81.4 MPH exit velocity. While the sample size isn’t nearly what it was in 2015, Baseball Savant’s default number of BBEs is set at 30, which led to Avilan topping the list.

After a rough Spring Training that saw him lose his bullpen job, Avilan pitched for the OKC Dodgers. In his first six innings, he allowed just three hits, issued three walks and struck out nine. That earned him a quick promotion to Los Angeles before being sent back at the end of April. In his first 6 2/3 innings back in AAA, he got lit up a bit to the tune of a 9.45 ERA and .333 batting average against, lost whatever control/command he had exhibited earlier in the season and didn’t look like he would contribute much to the Dodgers. He was rather pedestrian overall for OKC, but he was still a lock to be a September call-up. Avilan responded quite well by throwing eight innings of shutout ball in 10 September appearances, and he also struck out 10 hitters and walked three.

Avilan actually saw a decrease in velocity this season compared to previous ones. He was down almost 2 MPH (92.6) on his fastball from what he averaged in 2013-15 (94.3 MPH). It’s still plenty of velocity — especially from a lefty — but the drop was noticeable. While the sample sizes for his pitch usage were small, he began throwing his changeup a lot more this season (percentage-wise) than he had been throwing it in the past, and he allowed a 78.4 MPH exit velocity on the pitch. His fastball, despite diminished velocity, had an 82.5 MPH average exit velo.

Avilan was actually a little better against right-handers this season (and much better against them last season). For a left-handed reliever whose primary off-speed pitch is a changeup, that isn’t surprising, but his changeup usage against lefties increased substantially this season. 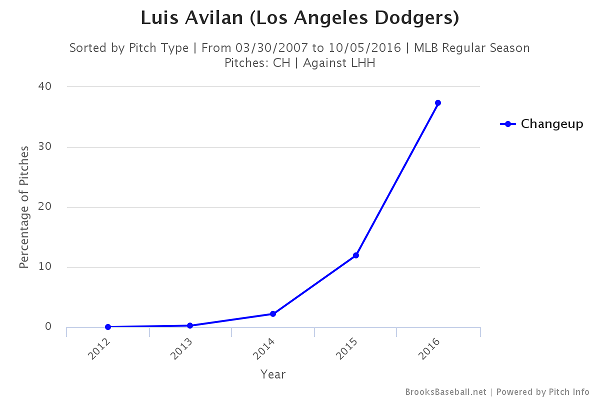 Again, this should all be taken with a grain of salt because of the sample size, but Avilan may have found something that works for him (26.1 whiff percentage against left-handed hitters in 65 lefty-on-lefty changeups). I’m a big advocate of same-handed-on-same-handed changeups, and with Avilan unafraid to throw his changeup to lefties, he allowed just two hits to lefties in 16 BBEs.

He still does throw the curveball, but very sparingly. Of his 327 pitches at the MLB level this season, just 20 of them were curveballs. Of those 20, 19 were to lefties (and resulted in a 10.5 whiff percentage).

At some point, Avilan’s exit velocity suppression has to be a skill — something that has been talked about by stats folks. Avilan has figured out how to limit exit velo better than anyone in the first two seasons it has been fully tracked by Statcast and MLB. It’ll be interesting to see if he can keep it up.

Avilan’s resurgence was unexpected by most, especially since he struggled so much in Triple-A. Here’s hoping he can keep things rolling for the next few series.

A side note: Grant Dayton was second in exit velo against at 83.8 MPH (46 BBEs). Unlike Avilan, Dayton is that guy who will shut down left-handed hitters out of the bullpen. The only left-handed hitters to tag him for an exit velo of greater than 100 MPH were Jason Heyward and Brandon Belt (twice). He’ll be the first guy out of the ‘pen, but having Avilan backing him up should work relatively well.

I still think Alex Wood should have gotten a roster spot in the NLDS, because he has been absolute hell on lefties in his career. He has posted reverse platoon splits this season, but that’s more of an aberration than anything else.

Dustin Nosler began writing about the Dodgers in July 2009 at his blog, Feelin' Kinda Blue. He co-hosted a weekly podcast with Jared Massey called Dugout Blues. He was a contributor/editor at The Hardball Times and True Blue LA. He graduated from California State University, Sacramento, with his bachelor’s degree in journalism and a minor in digital media. While at CSUS, he worked for the student-run newspaper The State Hornet for three years, culminating with a 1-year term as editor-in-chief. He resides in Stockton, Calif.
@DustinNosler
Previous Dodgers tentative NLDS roster has Barnes & Fields, no Enrique, Wood, Howell
Next Why the Dodgers might win the World Series