In the bottom of the sixth of yesterday’s NLDS Game 1 matchup with the Nationals, Dodgers right fielder Yasiel Puig was double-switched into the game when Grant Dayton entered for Joe Blanton in an attempt to matchup with Bryce Harper. With two down, Dayton seemingly did his job, getting Harper to hit a routine fly ball to right center, which is when it turned into anything but routine. Joc Pederson, the center fielder, called for the ball, but Puig sprinted in front of him to make the catch anyway.

It was unnecessary drama, but no harm no foul in the end. More importantly, Joc posted the picture after the game using the #PuigMyFriend hashtag, and Puig came with a humorous response on Instagram. 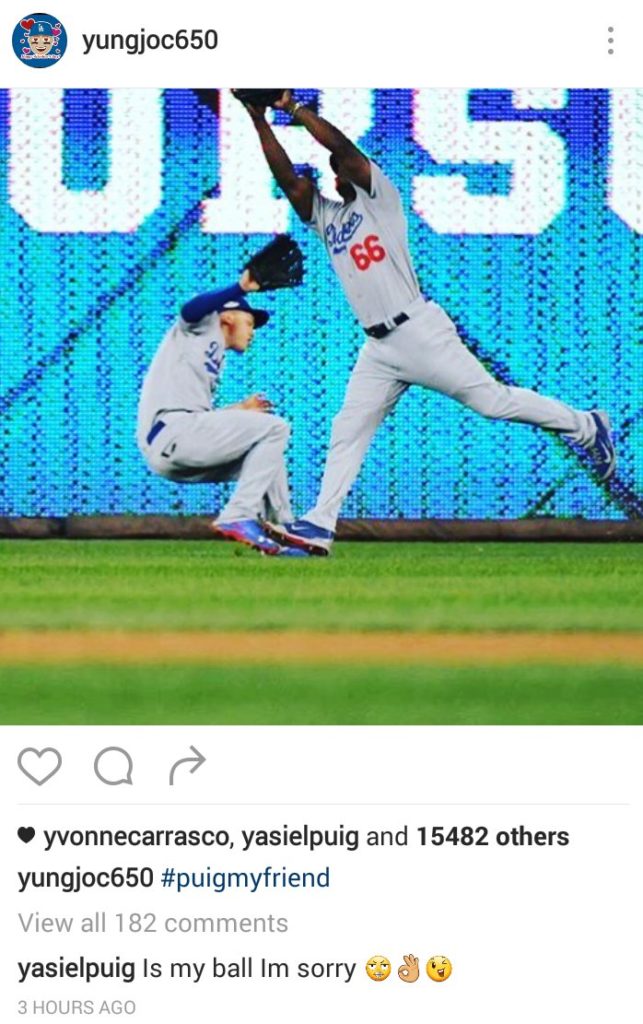 Winning is a lot more fun than losing. #Analysis

Anyway, there were a bunch of notes from Game 1 that we didn’t get to put elsewhere.

It was noticeable how aggressive the Dodgers were throughout the night against Max Scherzer‘s fastball, and Justin Turner thought that paid off the second time through the order, when he noticed Scherzer was throwing more breaking balls to lead batters off. Well, Turner sat on one, got one, and hit it out.

“I went out my next at-bat, got a first-pitch fastball and was aggressive to it. And I think the first time through the lineup as a team, we were pretty aggressive and that kind of affected the way Max pitched to us. The second time through, he went through all the secondary stuff even more than we saw him do on tape. That’s what you have to do, you have to make adjustments on the fly and see what other teams are doing and attacking and you have to try to make adjustments with them.”

This is why I enjoy trying to think along with the pitcher and hitter, as the sequencing mental game is always fun.

In case you hadn’t noticed, the bullpen stepped up in a big way, and most of the reaction seemed to be that it was business as usual.

The bullpen collected the final 12 outs, giving up just one hit in the process.

“That’s been our formula all year long,” Roberts said. A playoff setting did not change his strategy.

“When our starters go five, we never complain about it,” Jansen said. “We just go out there and do the job. We know it’s going to come down to us to keep this team going farther and farther.”

Kenley Jansen, for his part, wasn’t phased by the extra work because he prepared for it.

As far as Yasmani Grandal and Clayton Kershaw having constant meetings on the mound, Kershaw sorta explained it.

Kershaw appeared unable to establish a rhythm with catcher Yasmani Grandal. The pair met for three separate mound conferences during the first five batters of the inning.

The delays arose from Kershaw’s interest in switching the signs. He did not want the Nationals to steal any. “I had so many guys on second base tonight that I really wanted to make sure we were changing it up often,” Kershaw said.

Broadcaster and general idiot Harold Reynolds explained this during the game by saying A.J. Ellis would’ve solved this issue or something. But even assuming Kershaw is lying here, Ellis caught the postseason games that led to Kershaw having the postseason reputation to begin with, and while Kershaw has a 1.97 ERA throwing to Ellis, he has a 1.86 ERA when throwing to Grandal, so it seems more a narrative than anything based in reality.

Look, I’m not saying it has no impact. I completely believe that Kershaw is more comfortable with Ellis. However, I also completely believe Grandal went 2-for-4 and framed the shit out of pitches, and that Grandal didn’t have much to do with Kershaw missing his spots by 18 inches on half his pitches and throwing cement mixer sliders in the middle of the plate all night.

Speaking of Grandal and the staff of the Dodgers, here’s Kenley talking about the slider that ended the game.

“Seemed like [Werth] had started getting on that fastball,” Grandal said. “He’s a veteran guy. He knows what his strengths are.”

The whole thing is worth a read.

Corey Seager is now the youngest Dodger to ever hit a homer in the postseason, notes Eric Stephen of True Blue LA.