Gio Gonzalez Is Not A Normal Lefty

The Dodgers are currently on their way back to Los Angeles after splitting their two NLDS games in Washington. That’s good, almost! The Nationals are a good team and the Dodgers beat the pitcher who may win the Cy Young Award. Obviously they picked up Rich Hill for a reason, a reason he did not live up to today, but they could certainly be in a worse position, with one major caveat.

Gio Gonzalez is pitching tomorrow for the Nationals. Gio Gonzalez will be pitching that game with his left hand. The Dodgers’ struggles against left-handed pitching are historic; their non-pitchers have a .221/.299/.345 line against southpaws. This stat can’t be over-analyzed, but it can’t be ignored. It’s the way the Dodgers’ lineup is built, and it can’t be handwaved away by looking at home-road splits or whatever else.

Gonzalez’ 4.57 ERA this season might provide for some hope that the Dodgers may be able to get to him, but his deeper numbers are still quite good. After adjusting for his park and this year’s offensive environment, that ERA is only 9 percent worse than the league average. Gonzalez has not matched his FIP since 2013, but this year it’s 8% better than league average, though BIS’ contact quality data has him allowing the highest percentage of hard contact of his career. Gonzalez’ average exit velocity allowed is just about in the middle of the road for starting pitchers, but he’s also allowing more fly balls this year, in an age where more fly balls leave the park than ever.

Where Gonzalez really shined this season was in Baseball Prospectus’ DRA, which is the best statistic for isolating a pitcher’s true talent from his defense, catcher framing, environmental conditions, and so on. Gonzalez posted an 86 DRA-, identical to that of Madison Bumgarner and 17th best among starting pitchers. Bumgarner obviously has the innings advantage, but according to this statistic, Gonzalez is still significantly more talented than his ERA would suggest. However, it’s worth noting that in isolating a pitcher’s true talent level from his defense, DRA will remove factors that are still going to be present for Gonzalez when he takes the mound tomorrow.

Another thing worth noting about Gio Gonzalez’ full-season numbers is that he isn’t necessarily the same pitcher now that he was in April. His velocity started very low but has been trending up towards his career norms. 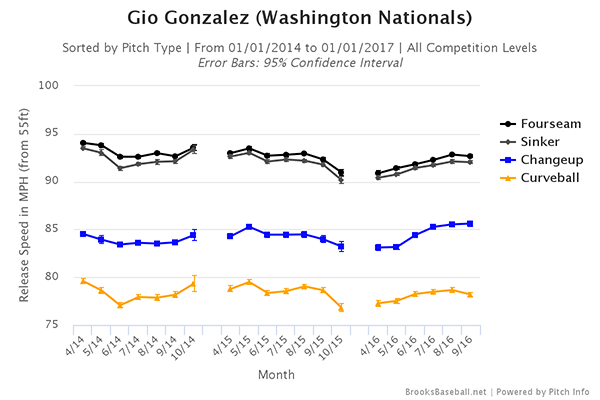 He started the season throwing about 91 mph with his four-seamer, but he’s now closer to 93. His sinker, change, and curve have followed that trend. Strangely, this has not resulted in more missed bats; Gonzalez struck out 22.9% of batters in the first half and 21.6% in the second half, but his walk rate dropped significantly to make up for it. That also does not address how contact quality changed, though his ERA and FIP both dropped dramatically as the season went along.

The above pitch chart adds some more information about Gonzalez: he does not throw a slider. A slider is one of the most effective weapons a pitcher can throw against same-sided batters. Dodger lefties had a .182 batting average against same-sided sliders this year, 26th in the league. Their slugging percentage (.342) and average exit velocity against same-sided sliders were just about middle of the road, but their whiff rate (18.1%) was the 6th highest in baseball, and the highest of the remaining playoff teams.

It’s hard to tell what those reverse splits would mean for Yasmani Grandal, Justin Turner, Howie Kendrick, or Yasiel Puig. However, perhaps Adrian Gonzalez, Corey Seager, Chase Utley, and Joc Pederson won’t be at as much of a disadvantage as what the team’s disastrous platoon splits would normally suggest. The winner of tomorrow’s game will be about three times more likely to advance to the NLCS than the loser, and at this point the Dodgers will take what they can get.

Daniel Brim grew up in the Los Angeles area but doesn't live there anymore. He still watches the Dodgers and writes about them sometimes.
@danielbrim
Previous Nationals 5, Dodgers 2: Rich Hill implodes, as does offense
Next ‘Dugout Blues’ episode 177 – NLDS recap thus far, look ahead