In what was perhaps one of the most dramatic fashions possible, the Dodgers are headed to the NLCS to face the Cubs on Saturday thanks to yesterday’s 4-3 win in Game 5 over the Nationals in the NLDS. Because hey, who didn’t expect the Julio Urias to get the win, Kenley Jansen to get the hold, and Clayton Kershaw to get the save, right?

Kenley, how ya feeling? 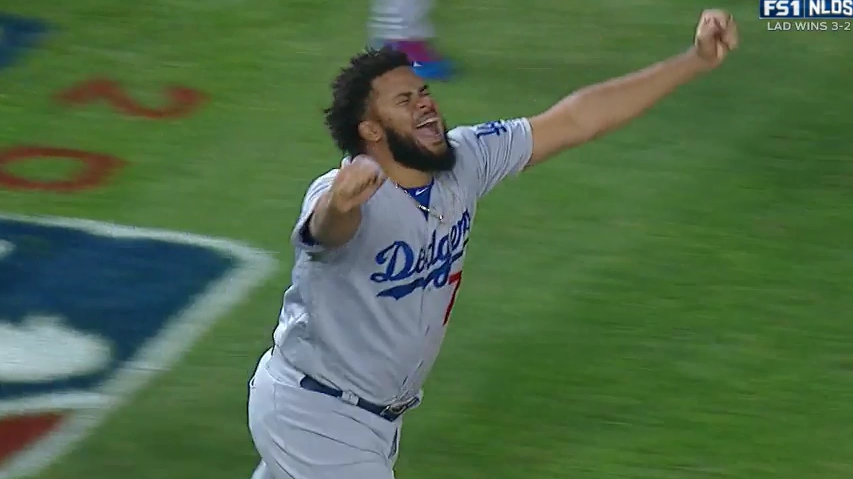 Appropriate since he emptied the tank for the team with 51 pitches, and him and Clayton also got the post-game field interview.

The SportsNet LA crew talked about the overall team win, which was not incorrect.

How hype was the game? James Worthy was hype.

And let the party begin in the clubhouse.

Team picture/celebration with Josh Reddick wearing a WWE ref uniform cause of course.

Adrian Gonzalez and Justin Turner seemed to be enjoying it.

And Kenta Maeda‘s translator, Will Ireton, was so lit he was on the floor.

Things are getting a little too crazy in the @Dodgers' clubhouse #LALovesOctober https://t.co/FlNZoU3W1r

Things are getting weird in the #Dodgers locker room. pic.twitter.com/f6sPUXxGju

Josh Reddick has the right idea about pants pic.twitter.com/cPDncf8glk

Oh yeah, Kenley? He’s gonna be a starter next year.

An exclusive look inside the @Dodgers​ clubhouse after the stunning #NLDS clinch. pic.twitter.com/Yfg3ZLmbcG

There’s also a ton of other celebration pictures here from Jon SooHoo. Who else?

Just like when they clinched during the regular season, players sent messages to fans, this time from JT, Joc Pederson, Corey Seager, and Andre Ethier.

Dave Roberts was interviewed and talked about the decisions.

“That’s what playoff baseball is about”- @coreyseager_5 talks with @jonmorosi after the @Dodgers win to advance to the NLCS. #LALovesOctober pic.twitter.com/OHWGUG4UQW

Joc talked about his key hit.

His swing changed the game. @yungjoc650 talks to @jonmorosi about his home run & the @Dodgers' victory. #LALovesOctober #postseason pic.twitter.com/em1oONQAYc

Everybody in the studio had a laugh about the spin rate comment.

A-Gon talked about playing in one of the better games in postseason history.

“It’s one of the best games in history right there."- @Dodgers' @Adrian_ElTitan to @jonmorosi pic.twitter.com/UgqQymrGmz

This team seems to thrive on desperation, which is something quite unique to Dodger teams since 1988. I’m not saying this means the Dodgers are gonna win the World Series or even beat the Cubs in the NLCS, but I think it gives them a shot, because inevitably the playoffs devolve into desperate messes and that’s probably the best chance for the Dodgers to survive and advance yet again.