Dodgers’ bullpen could use a ground ball pitcher, but options are limited

While the Dodgers made a big splash by re-signing their three most valuable and best free agents in Rich Hill, Kenley Jansen and Justin Turner (the last two are still pending, technically) and might be on the verge of acquiring one of the best power-hitting second basemen in baseball, there’s still another move or two to be made.

Joe Blanton threw 80 much-needed innings last season. He struck out a batter per inning, but wore down in the playoffs. That was not more evident than against the Cubs in the National League Championship Series. He is a free agent and it doesn’t seem like the Dodgers are terribly interested in bringing him back. That’s fine, but they need to find a way to replace his production. Yimi Garcia could have been that guy, but he had Tommy John surgery in October and will miss the 2017 season. They’re definitely in on Greg Holland, but he’s not ground ball guy, and while he would help replace Blanton’s production, it’d be unrealistic to think he could replace all of that production coming of TJ surgery himself.

The other day, Chad outlined the Dodgers’ need for a reliever or two toward the back end of their bullpen.

“While the Dodgers do have a lot of starter-reliever hybrids at their disposal, that only goes to my point about reliable options, since it’s impossible to tell when they might be needed in the rotation and we don’t know what any of them would do if forced into a permanent pen role.

The current group basically has a lot of potential to emerge and be a top-five bullpen yet again, but it also has a lot of risk and therefore carries the potential to blow up into mediocrity. Kenley Jansen returning helps take away a significant amount of anxiety, but there’s plenty of reason to still have concerns.

Anyway, I’m definitely not saying Yimi Garcia being healthy would’ve solved anything as he was a question mark in his own right, but losing him for the year made me take a closer look at the pen as it’s currently situated and I quickly realized I’d feel a lot more comfortable with a healthy, proven veteran from the right side (Brad Ziegler?) to provide a reliable option to turn to.”

Ahh yes, Brad Ziegler. He would have been a good signing. Unfortunately for the Dodgers, he agreed to a 2-year, $16 million contract with the Marlins. For that money, Ziegler would have been a welcome addition to the Dodgers’ bullpen that is severely lacking a ground ball specialist.

Ziegler is one of the very best pitchers at getting ground balls. Since he debuted in 2008, he has induced 66.3 percent of the balls put in play against him to be hit on the ground. As the Dodgers’ bullpen is currently constructed, they could use a ground ball specialist. Their top full-time relievers who had the best ground ball rates in 2016 were J.P. Howell (59.1 percent), Luis Avilan (51.3 percent) and Chris Hatcher (44.3 percent). All three of those guys had their struggles with performance, being able to stick in the majors and with injury, and the Dodgers’ bullpen actually led the majors in fly ball rate at 39.4 percent. It worked for the, but it’s a concern — especially come the postseason.

Of the available free agent relievers not named Ziegler, there aren’t any better at getting grounders than Ziegler is.

The next-best ground ball specialist out of the ‘pen is Peter Moylan, who was with the Dodgers in 2013. He threw 15 1/3 innings and was able to be worth -0.4 WAR, which, yikes. He has been better since leaving, but he’s not a realistic option. Next up is Seth Maness, but he underwent Tommy John surgery in August and will miss virtually all of 2017 himself.

Is Trevor Cahill a legitimate option? The Dodgers signed him to a minor-league deal in July 2015 when the Braves released him. The Dodgers released him and went to the Cubs, where he enjoyed some success out of their bullpen the last two seasons. He pitched to a 2.61 ERA in 82 2/3 innings, but that’s a bit misleading, as his FIP was 4.10 because, despite being a ground ball specialist, he gave up nine home runs in those 82 2/3 innings. He also discovered a new level of poor control in 2016, as he walked 4.8 hitters per nine innings, good for a 12.3 BB%.

The rest of the guys aren’t exactly ground ball specialists. Scott Feldman is a former starter who might be worth a look if he can regain his 2011 ground ball form (62.1 percent). But he has a sub-50 percent ground ball rate for his career, so that seems like an aberration. The rest of the free agent class doesn’t look like it fits if the Dodgers are after a ground ball guy.

If the Dodgers sign Holland and don’t acquire anyone else, perhaps the lack of a ground ball specialist can be solved in house.

We know Alex Wood is good at getting grounders, but I’m hoping he spends the majority of his 2017 season in the starting rotation. That leaves an interesting option in Ross Stripling, who had a solid debut season that saw him make 14 starts and eight relief appearances.

His first three relief appearances were in July. He threw 8 2/3 innings and had a ridiculous 70.8 percent ground ball rate. It’s even more ridiculous when you look at his pitching heatmap. 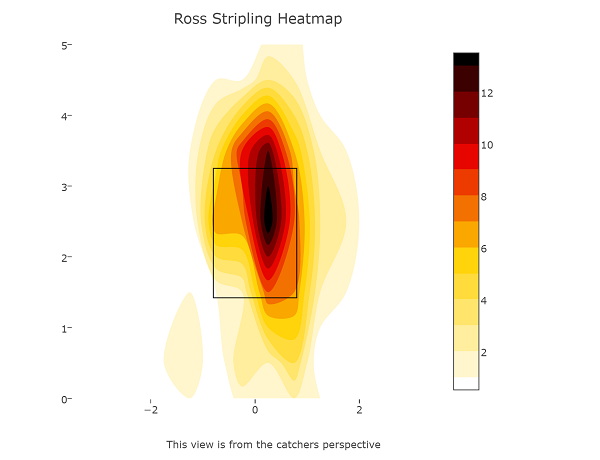 He worked up in the strike zone quite a bit, but hitters still managed just a 1.1 degree average launch angle (20 batted ball events) against Stripling in those three appearances.

He closed out the season by making four relief appearances and posting a 50 percent ground ball rate. That’s surprising because, as you can see, he worked lower in the strike zone during that time. His average launch angle allowed was 13.1 degrees (30 BBE). 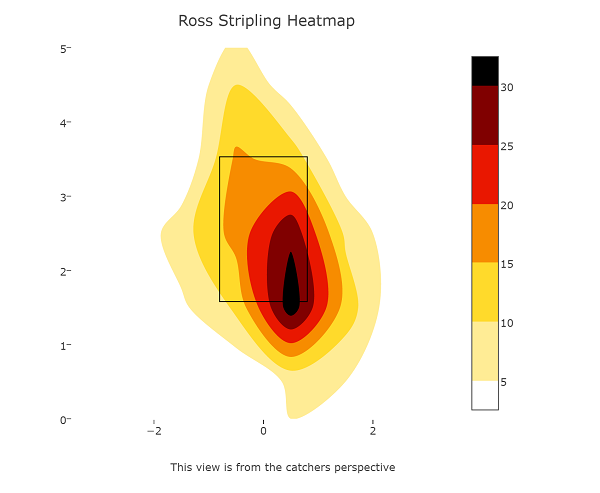 It’s almost like those two heatmaps should be reversed. But the bottom line is, Stripling has shown an ability — in an albeit small sample size — to get ground balls as a reliever. With Howell gone, Stripling and Avilan might be the two best ground ball relievers the Dodgers have right now, and though I’m sure Ross would want to remain a starter, he might be most valuable to the Dodgers in the pen.

As it stands, the Dodgers’ bullpen is in pretty good shape. There will be another move or two made before Spring Training, but they could, conceivably, break camp today and be OK. The addition of a ground ball specialist would be nice, but that kind of pitcher may not be so easy to acquire. Perhaps there is an in-house option, but that remains to be seen and would need to be proven. If they can at least land a guy like Holland, they might be able to afford turning to a Stripling or Brock Stewart-type guy to fill out the ‘pen for that role.

Much like 2016, the bullpen projects to be a strength (and the best, according to FanGraphs). The biggest move was bringing Jansen back. Now, the front office just needs to work on filling the production lost with Blanton’s departure.

Dustin Nosler began writing about the Dodgers in July 2009 at his blog, Feelin' Kinda Blue. He co-hosted a weekly podcast with Jared Massey called Dugout Blues. He was a contributor/editor at The Hardball Times and True Blue LA. He graduated from California State University, Sacramento, with his bachelor’s degree in journalism and a minor in digital media. While at CSUS, he worked for the student-run newspaper The State Hornet for three years, culminating with a 1-year term as editor-in-chief. He resides in Stockton, Calif.
@DustinNosler
Previous 2016 Dodgers in Review: RHP Nick Tepesch
Next Podcast: ‘Dugout Blues’ episode 183 – Kenley and JT re-sign, Dozier, Yimi TJ