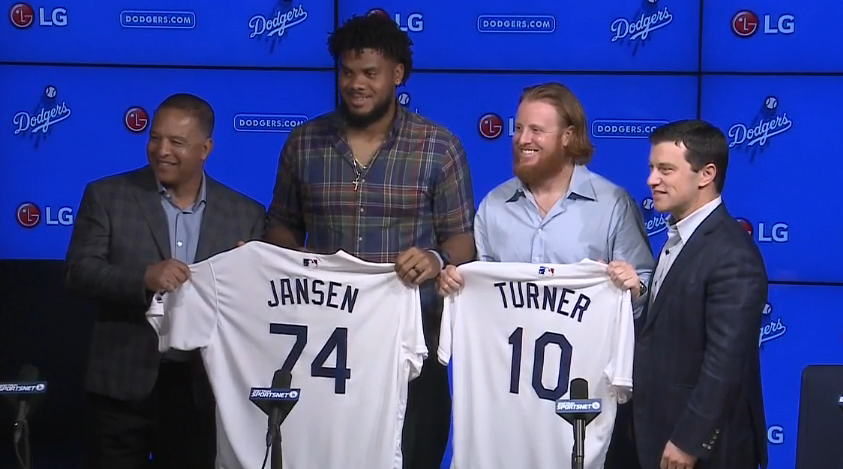 The Dodgers held a press conference for recent signees Justin Turner and Kenley Jansen yesterday after both their deals were finally made official, and while a lot of information was provided that we were already aware of, there were some interesting tidbits we didn’t get before as well as news on players other than the two sitting at the table (1/2/3/4/5).

Andrew Friedman spoke of the Kenley, Turner, and Rich Hill signings as part of the direction they want to go with in terms of the clubhouse dynamics.

“It’s part of that clubhouse dynamic, that culture that we’re trying to cultivate and continue to build,” Friedman said.

He also spoke about how despite the history of relievers on long-term deals bombing and JT’s previous health issues and odd career path, the ownership was supportive of giving the front office the payroll to go out and bring the duo back.

“[Ownership was] extremely supportive of bringing these guys back,” said Friedman. “I think heading into an offseason where they’re at the top of the list, in terms of players, coupled with who they are and how well we know them, I think gave everyone more confidence to stretch and be creative. Kenley, in our minds, is the best reliever in baseball. Justin represents so much of what we value in a player.”

Personally, I’ve always found the label that they relied solely on numbers to be odd, or at least those people had to be ignoring all the quotes they give about building a culture and their overhaul of the scouting and player development departments. The moves aside, the organization seems to be moving in the right direction.

More importantly, the JT and Kenley themselves talked about their choice to return. Justin Turner described Kenley Jansen as the bullpen leader…

“Kenley’s the leader of the bullpen down there,” Turner said. “Just his leadership, his experience, his willingness to be unselfish and take the ball whenever the team needs him to take it, not just in the ninth inning so he can go get a crazy contract. That sets an example for those guys down there.”

…and hopes other down there look to him as the role model.

Kenley seemed to feel the same about JT’s influence.

“With J.T., sometimes when I get out of line — I’m not going to lie — he’ll pull me aside and put me back on track,” Jansen said.

And he mentioned JT helping all his teammates (even when things don’t go well for him).

Neither seemed to deny that money was a factor, just that it wasn’t everything and their main goal is to win.

“Like I said, it ain’t about the money,” Jansen said. “I want to be out here, winning a championship in L.A., the fans have been waiting for what, 29 years? From the bottom of my heart, I want to win a championship out here. Feel like it’s the best decision for me. Sometimes, it’s not about the money. I just didn’t want another name in front of my chest. The next day, Kershaw texted me, and that was awesome. With the group of guys we have, I just didn’t want to leave.”

“I love our team,” [Turner] said. “I’m excited to see what ends up happening this offseason. Our front office has done a great job. We had all those injuries and didn’t skip a beat, because of the moves they made. And like Kenley said, this city deserves a championship. It’s been waiting for a long time, and we’d love to be the guys to bring it home.”

They also confirmed the story that things started to change during Kenley’s wedding in Curacao when JT, Yasiel Puig, and Scott Van Slyke were down there.

“The first couple days we were there, there wasn’t a single word spoken about baseball,” Turner said. “It was all about going down to Curacao, Kenley showing us around, showing us his country, showing us where he’s from. He took us out on his boat. It was really refreshing actually, to not have any baseball talks. When it actually came up was in his room the day of his wedding. He was getting a haircut. … It just kind of came about. We were talking about both of our situations, what was going on, what was happening. I don’t think either one of us was trying to pressure anyone to make any decision. We were just kind of laying out the options and different situations and experiences. I left the room and Scott Van Slyke and Yasiel Puig came in. I don’t know what their conversations were. Whatever happened, at the end of that night I got on a plane the next morning, jumped over to the next island over, Aruba, and sure enough I saw on my phone that he’d agreed to be a Dodger. I was extremely happy.”

And a lot of the decision seemed to be based on the direction the guys in the dugout were taking the team.

“As much as you want to go out and test the waters – I had this conversation with Kenley – it’s not always greener on the other side when you go to another organization,” Turner said. “As good as they may make it seem it’s going to be for you, you don’t necessarily know what you’re getting yourself into. With the Dodgers, obviously being here the last three years, I knew exactly who was here. I love the staff, (Manager) Dave Roberts and what he’s done, the guys he’s put into place, what they mean and what they stand for. I love being a Dodger. I love being in the community. I’ve got a lot of stuff going on right here in this city where I grew up not too far from and really wanted to continue those relationships, keep building on it. We have some unfinished business too.”

For whatever you think of Roberts’ decisions in the game (and I always let you know what I think about those), it’s impossible to argue that he’s taken control of the clubhouse, will make unconventional decisions in order to win, and has developed the credibility with players to use his style without serious backlash.

It’s impressive and he continues to validate his hire.

Speaking of Puig, for what seems like the third off-season in a row, we’re talking about whether he can get it together.

“No, no. I think the upside is significant, and I think there’s a lot more awareness of kind of what’s expected,” Friedman said at Dodger Stadium. “I definitely see some real maturation. In terms of how that translates on the field and success remains to be seen. But he’s capable of so much, and I know his teammates want to see him achieve that, we want to see him achieve that, and we’ll do everything we can to put him in a position to do that.”

“You look at a guy that can dance like he can, and he doesn’t have that same rhythm in the batter’s box,” Friedman said. “You look at kind of what’s happened year over year over year, and there have been changes, and it becomes muscle memory and it’s a hard thing to untangle. We had some things that we wanted him to work on when he went down to Oklahoma City, and he started making progress on that. It’s hard in-season.”

“What we saw in September was just kind of scratching the surface of that, because he didn’t have that much time in August to work on it,” Friedman said. “He’s been getting after it this winter, so we’ll see when we get to Spring Training how those changes have kind of taken hold.”

I still hope for Puig, but admittedly at this point it’s mainly hope and just my wish for success because he’s fun. But in reality, it’s a “I’ll believe it when I see it” thing at this point.

Speaking of outfielders, Trayce Thompson‘s literal broken back is not yet 100%.

“The back has kind of slowly progressed,” Friedman said. “He’s now getting in to more activities and is working toward being more aggressive with baseball activities. We expect him, at some point in Spring Training, to be kind of full go. We’ve deliberately kind of taken some time before the New Year to focus much more so on the strengthening aspect. He spent a lot of time here this winter, and now as we ramp up, our hope is that there aren’t any setbacks. He’s done everything he can to put himself in a position for that not to happen.”

This kind of stuff is why I’m not sure how the Dodgers pursuit of outfielders is dismissed out of hand. Yes, I totally agree that second base should be a priority, but Dustin‘s articles about outfield upgrades are a legit alternative path. While the team has a ton of seemingly quality outfielders, for reasons like experience or injury or … Puig the Dodgers can only really rely on Joc Pederson right now for production. Thus, exploring a more reliable option seems like a valid way to improve.

MLB Tonight also talked with Friedman after the press conference, and besides the default Brian Dozier talk, I found the convo about Julio Urias‘ innings and a Corey Seager extension interesting.

There’s no clear answer to the Urias question, but it certainly sounds like they would consider starting him in the minors, which the rotation depth would allow without much issue. And I really think Friedman wanted to say to the Seager suggestion, “Corey’s agent is Scott Boras, he’s not signing a goddamn extension now.” Friedman also admits that the outfield is Joc and … a bunch of dudes. Good dudes, but still hardly anything reliable.