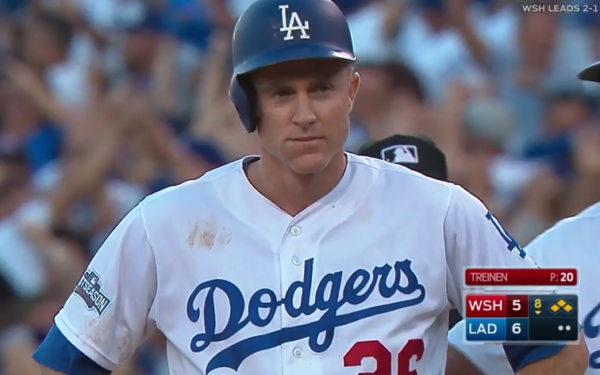 Not content with adding one player to a crowded roster on a late Friday night, the Dodgers are apparently about to add another. According to a report by Andy McCullough of the Los Angeles Times, the Dodgers are going to bring back Chase Utley:

Chase Utley is coming back to the Dodgers on a one-year deal, according to a person with knowledge of the situation.

Earlier this week, Utley was tied to Cleveland in rumors. The roster fit there never made a lot of sense, and at first glance it doesn’t make sense here either. We’ll get to that later.

Utley played regularly last season, and on the full-season balance he did pretty well, hitting .252/.319/.396 (97 wRC+) in 565 plate appearances. He put up exactly 2 fWAR, which probably overrated his defense, but he had a very respectable season as a whole. However, Utley’s production faded quite badly as the year wore on. From June 1st onward, he hit just .236/.292/.381 (83 wRC+). For most players, it would be best to look at the full season performance as being the most indicative number going forward. However, Utley just turned 38, and it’s fair to wonder if his age caught up to him by the end of the season.

As a result of the Logan Forsythe trade, it’s clear that Utley’s role will not be the same as it was last year; he will not get 565 plate appearances in 2017. Instead, he will be relegated to being a back-up at second base, and potentially first as well. Utley also played a few innings at third after the Dodgers acquired him in 2015, but he didn’t really look comfortable and the Dodgers have a few other backup infielders who can fit at the position.

Utley not playing every day could be key into getting better production, especially if it was just wear and tear that slowed him down so much by the end of 2016. A bench role would also help with his platoon splits: in 91 plate appearances against lefties in 2016 Utley hit .154/.206/.264 (27 wRC+). That’s a tiny platoon sample, of course, but as his bat slows it could become more of an issue and it will now be easier to protect him from same-handed pitchers. Depending on the size of the Dodgers’ bench, it would also be interesting to see Utley pinch-run sometimes. He isn’t as fast as he once was, but even last year his reads on the bases were excellent. Utley is a fringe Hall of Fame candidate, and part of his case is based upon being one of the best non-stolen-base baserunners of all time.

This signing means that the Dodgers will have to clear yet another 40-man spot. That makes three, since they have to make room for Sergio Romo and Franklin Gutierrez as well. As Dustin pointed out in his Gutierrez write-up, once the 60-day disabled list comes back they will be afforded some flexibility. The 60-day disabled list will become available next week, but the clock on those 60 days does not start until the start of the regular season*. Yimi Garcia can be transferred to the list immediately, and will free up one of the three needed spots. Trayce Thompson and Hyun-Jin Ryu are also candidates to be added to the 60-day DL, but both would require pushing back their previously (likely overly-optimistic) recovery timelines. Players added to the 60-day DL will not be available until the start of June. We’ll know more next week.

Utley will almost certainly make the 25-man roster out of Spring Training unless he gets hurt, so the fight for remaining backup spots just got even more ridiculous. We’ll probably do a full rosterbation post at some point, but a quick summary is in order. For argument’s sake, let’s call Austin Barnes, Utley, and Gutierrez locks to make the opening day roster. Depending on the size of the bench, that only leaves one or two spots left for the following players (assuming an outfield alignment of Puig/Pederson/Toles), one of whom needs to be able to play shortstop:

That’s not everybody, and that’s insanely crowded. The Dodgers only carried a four-man bench for most of last year, and if they did that in 2017, Taylor would probably get that last spot almost by default. If the Dodgers add a fifth bench player, it would likely be either Ruf or Van Slyke in the Adrian Gonzalez semi-platoon role. At this point the Dodgers almost have to carry one fewer reliever than last year to make this roster work. It’s a crunch, and should provide some much-needed intrigue to spice up Spring Training. In reality, the chances of the above players all making it through spring healthy are probably zero, so some things will resolve more easily in action than on paper.

With that roster crunch, this signing almost doesn’t make sense, except that the Dodgers are clearly bringing Utley back to be Baseball Dad once again. Remember how the baseball nerds don’t care about chemistry? They just made a chemistry signing. As a 25th-man type role that’s more than acceptable, and Utley is only a few months removed from being a productive player. From a fan perspective, it’s hard not to like that. However, from the perspective of one of the people on that list above, this signing just made playing in the majors that much more difficult.

Daniel Brim grew up in the Los Angeles area but doesn't live there anymore. He still watches the Dodgers and writes about them sometimes.
@danielbrim
Previous Dodgers to sign Franklin Gutierrez, finally make me happy
Next 2016 Dodgers in Review: RHP Bud Norris