Welcome to the third and final segment of our ‘Giants who became Dodgers’ series, which brings us to some more contemporary history. Five of the six entries in this portion were Ned Colletti free agent signings, Colletti himself being something of a Giant who became a Dodger (though we’re only counting players in this series). It’s hardly a complete list — Colletti sure loved him some ex-Giants — but they are the most noteworthy examples.

This segment also features the most recent Dodgers/Giants trade, just the 10th ever.

Jeff Kent, a potential Hall of Famer and one of the best-hitting second basemen of all time, played for five different teams during his 17-year MLB career. He played six of those years — including his 2000 MVP season — with the Giants.

When Kent’s Giants contract was up in 2002, he signed with the Astros as a free agent, and continued to perform well in Houston. In 2004, he became a free agent again; this time, he signed with the Dodgers. Kent, a Bellflower native, grew up attending Dodger games, and got a bit teary-eyed at the press conference announcing the deal:

The last ones to know were Kent’s parents, whom he invited to the press conference but kept the reason why a surprise. “My mom and dad didn’t know about this. … That’s why I’m emotional,” Kent said as he occasionally teared up. “More so, probably because … this might be my last turn … and I’m happy to be part of the organization. I grew up here, my dad taking me to Dodger games. … It’s special for me.”

Of all the players listed here, Kent’s transition to the Dodgers was the smoothest. By several metrics, he was one of the best — if not the best — second baseman in Los Angeles Dodgers history.

I could end this post here, choosing to focus solely on Kent as a ballplayer and not on his personal reputation. However, some of Kent’s actions — including cantankerous clubhouse behavior having the audacity to speak ill of Vin Scully — permanently colored the way many Dodger fans view him. We can’t know for sure how much of his reported locker room antics was accurate — after all, much of the reporting on the subject was done by T.J. Simers, who loved nothing more than to stir up trouble. But still, for much of the Dodger faithful, Kent very much was a guy to reluctantly root for rather than a fan favorite.

I guess I can’t conclude this without mentioning Kent’s stint on Survivor, because that’s a thing that happened. I don’t really want to write about that, though, so I’ll just put this here instead:

Schmidt became a free agent after the 2006 season, and signed with the Dodgers to a 3-year, $47 million contract. Schmidt’s Dodger tenure was largely disappointing, as he spent most of it injured. He made six starts in 2007, with a break between the first and last three due to a right shoulder injury. He ended up having surgery which took him out not just for the remainder of the season, but for all of 2008 as well.

Schmidt came back in July of 2009, but made only four starts before going back on the disabled list. That was it for both Schmidt’s Dodger and MLB career.

We can debate about what the worst free-agent signing in Dodger history is, but most would agree that Schmidt is pretty high up on that list. Essentially, the Dodgers paid about $4.7 million for each of Schmidt’s starts. His grand total of 43.1 innings pitched comes out to about $362k an out. With an ERA of 6.02, a FIP of 5.37 and a WHIP of 1.708, it’s understandable that Dodger fans look back at Schmidt with some disdain.

Mark Sweeney would not be an especially memorable part of Dodger history were it not for the fact that he was the first player traded from the Giants to the Dodgers in twenty years.

Sweeney, who played 14 big league seasons and served mostly as a bench player, bounced around between five different teams before he signed with the Giants as a free agent in 2006. In 398 plate appearances across two seasons, Sweeney put up a slash line of .252/.340/.390.

In August of 2007, the Giants sent Sweeney to the Dodgers for a player to be named later (who turned out to be infielder Travis Denker, who’s currently in the Diamondbacks’ system, if anyone was curious). Sweeney finished out the 2007 season going .273/.294/.303 in 34 plate appearances, almost all of which came as a pinch hitter — Sweeney made just two starts at first base for the Dodgers that year.

Sweeney re-signed with the Dodgers as a free agent that offseason. In his 108 plate appearances in 2008 (again, most coming as a pinch hitter), Sweeney slashed .130/.250/.163. The numbers aren’t impressive, but Sweeney does get some credit for giving up jersey No. 22 so that the rookie Clayton Kershaw could wear it.

Utility man Eugenio Vélez played five Major League seasons, the first four of which were with the Giants. He spent most of that time as a bench player, occasionally filling in at second base and in the outfield. As a batter, Vélez went .256/.300/.388 in 678 plate appearances. When he became a free agent following the 2010 season, he signed with Los Angeles.

Vélez’s Dodger career, while inarguably a disaster, is actually kind of remarkable. In 40 plate appearances, Vélez did not get a single hit. From Wikipedia:

In the last game of the season, Vélez ground out as a pinch hitter in the eighth inning, finishing the year 0 for 37, the most at-bats in a season without a hit by a position player in Major League history. He also extended his overall hitless streak to 46 at-bats, breaking the record previously shared by Bill Bergen, Dave Campbell and Craig Counsell.

Vélez walked twice, and once got hit by a pitch, so his OBP of .075 was slightly better than .000, but really, there’s not a ton more to say. Vélez’s Dodger tenure was historically bad, and any time a new Dodger gets off to a disappointing start offensively, Vélez will always be the point of comparison.

For those who were wondering, Velez is still active. After playing in the minors for several different teams, Velez made the move to the Mexican League in 2015, where he also played last year.

Juan Uribe only played a couple of seasons with San Francisco, but his contributions there were important. He had a very good 2009, and had a few key hits in the 2010 postseason — namely, the game-winning home run against the Phillies in the NLCS that sent the Giants to the World Series.

When the Dodgers signed Uribe to a 3-year, $21 million contract that offseason, though, it felt to many like it was probably overpay. Uribe’s poor performance for the first two years of his contract seemed to validate fan skepticism. In 474 plate appearances, Uribe batted a meager .199/.262/.289. His WAR of -0.4 would’ve been even worse if not for his still-strong defensive abilities.

Then, in 2013, something changed. After a strong showing in Spring Training, and after Luis Cruz turned out to be a pumpkin, Uribe emerged as the Dodgers’ starting third baseman. Somewhat miraculously, Uribe could hit again — he posted a respectable .278/.331/.438 slash line on the year. He finished the season third amongst Dodger position players in WAR, in no small part due to his outstanding performance at third base.

All of a sudden, the much-mocked Uribe became the beloved Papi/Uribear/#Goribe. I’m not sure I’ve ever seen such a radical shift in fan attitude toward a player. Of course, Juan Uribe was actually awesome all along — we were all just too blinded by offensive mediocrity to have seen it. (For what it’s worth, though, it sounds like his presence in the clubhouse was always appreciated.)

Uribe’s redemption arc culminated in him coming up with a huge three-run shot in Game 4 of the 2013 NLDS against Atlanta, perhaps the most memorable Dodgers postseason home run since Kirk Gibson. 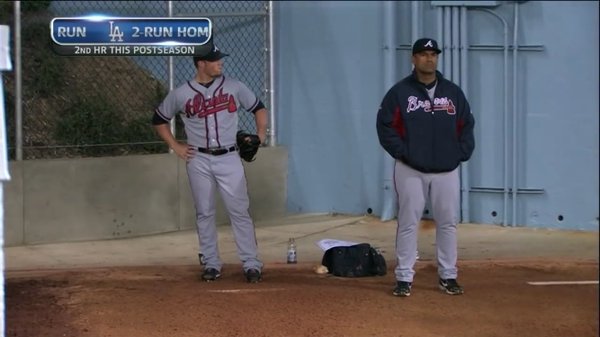 At the end of his original Dodger contract, Uribe signed back with Los Angeles for two years. He split starting third base duties with Justin Turner in 2014, and had yet another strong offensive season, batting .311/.337/.440 in 404 plate appearances. However, Turner took over as the starting third baseman in 2015, and Uribe was traded to Atlanta in May.

That offseason, Uribe signed with Cleveland as a free agent, but was released partway through the 2016 season.

The Sergio Romo situation is most reminiscent of the Brian Wilson situation, in that both were notable relievers who spent their entire careers with the Giants before signing with the Dodgers as free agents. With that notability came the ire of Dodger fans, who then had to reckon with some complex feelings at seeing players they’d long disliked swap the orange and black for the blue and white.

Wilson wasn’t especially good in 2011, and he made only two appearances for the Giants in 2012 before going on the DL with a sprained right elbow. He ended up undergoing Tommy John surgery that took him out for the remainder of the season.

Wilson’s contract was up at the end of 2012, and he went into the 2013 season unsigned until late July, when the Dodgers decided to take a flyer on him with a minor-league contract. Mike (hey, remember him?) summed up the weirdness of the situation nicely at the time:

Now before we discuss the merits of any possible signing, we probably should discuss the elephant in the room: you hate him. Of course you do. He was a Giant, and not only was he a Giant, he was a huge part of their 2010 World Series title, even getting the final out. He’s a big weirdo with a giant, annoying, beard. He got into that thing with Casey Blake. He was in those tremendously irritating “Black Ops” Taco Bell ads. If Taco Bell was a place I would ever go to eat, ever, those ads would be enough to put a stop to that. I’M BLACK OPS.

There’s no better way to endear yourself to a fanbase than playing well, though, and Wilson’s strong performance in his 18 appearances certainly helped Dodger fans get over their unease. In 13.2 innings pitched, Wilson allowed just one run. He struck out 13 batters while walking only four. In the postseason, Wilson continued to pitch well, delivering six scoreless innings across the NLDS and NLCS.

The Dodgers rewarded Wilson for his 2013 efforts with a two-year, $19 million contract. Unfortunately, Wilson’s 2014 went pretty poorly. In 48.1 IP, Wilson allowed 26 runs, with a WHIP of 1.614 and an ERA+ of 75. He was released that offseason, and has remained unsigned for the past two years, although he’s apparently attempting a comeback as a knuckleballer.

Special thanks to Baseball-Reference, the Society for American Baseball Research, Baseball Almanac, and the National Baseball Hall of Fame for making this possible. Additional research conducted via ProQuest Historical Newspapers.

Sarah Wexler is a native Angeleno and longtime Dodger fan. She began blogging about baseball in 2012 on her Tumblr, New Grass On The Field, where she covered an array of topics but especially enjoyed exploring baseball history. She is now a reporter/producer for MLB.com. She earned her master's degree in Sports Management from Cal State Long Beach. She graduated from New York University in 2014 with a bachelor's in History and a minor in American Studies. She's an avid Springsteen fan, which is a big boost to her baseball writer cred.
@sarahwexler32
Previous Giants who became Dodgers, part 2: 1920s to 1980s
Next Dodgers land Drew Jackson and Aneurys Zabala for Chase De Jong in win-win deal