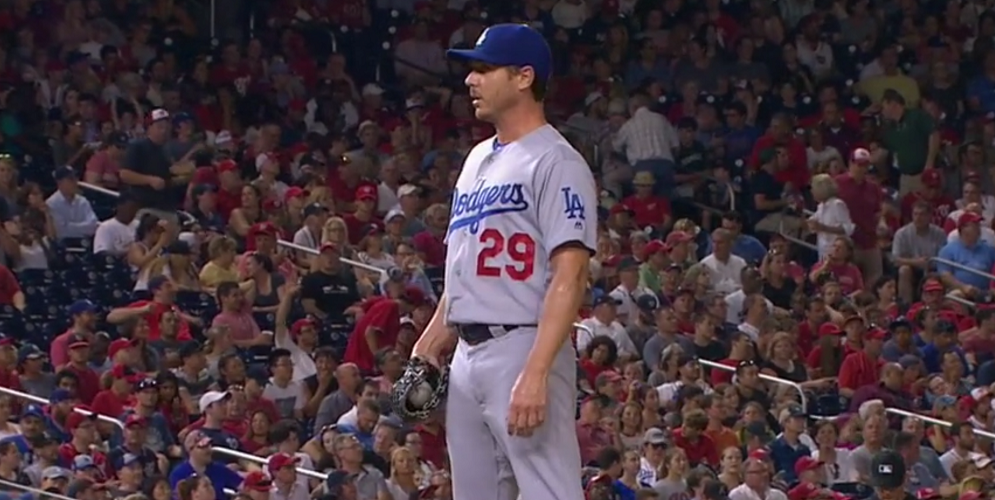 In evergreen news, Scott Kazmir is hurt, having to exit the game with hip tightness. That’s not worrisome in itself, but what is worrisome is that the injury is related to the issues he had last year.

Kazmir had spent the off-season supposedly working this issue out, but to no avail.

“The frustration’s through the roof right now,” Kazmir said. “It’s something I’ve been dealing with for a while. The treatment I get, the exercises I do, everything like that, and to be in the spot I’m in right now, is definitely a head-scratcher. I’ve come back from worse. I’m staying positive. I know what it takes to pitch to my full potential, and I’ll keep working to do that.”

But not to worry because he hopes to stay on track since the injury only costs him like 10 mph off his fastbal … oh, oh no.

Kazmir is hopeful he can stay on track and not miss any Cactus League starts. He expressed his concerns to pitching coach Rick Honeycutt during his bullpen session before Monday’s game, but despite losing about 10 mph on his velocity, he did not consider scratching his start. “Even throughout the beginning of last year, I felt a little bit of that in some starts, and then it would all of a sudden loosen up, and the next thing I know, I’m throwing 95, 96,” Kazmir said. “That’s the most frustrating part, because I know it’s in there. Not being able to get that full mobility, full range of motion, it’s almost like I’m skipping a step in my delivery. It’s just a tough way to pitch.”

I mean if this means Alex Wood gets his rotation spot, perhaps this is a blessing in disguise. That’s about the only upside I can think of.

In other injury news, Andre Ethier had to exit the game yesterday with lower back issues.

Andre Ethier exited with lower back spasms in the top of the third, but the club said the outfielder believes he will be fine Tuesday.

Reminder that the club also said his leg would be day-to-day before it was broke.

Oh yeah, and because that’s not enough, Pedro Baez‘s hand might have a problem.

That sounds less like a contusion and more like something is seriously wrong. It’s not so much that I would miss Baez as it is that Baez is still better than like Josh Ravin.

Onto more uplifting news, Willie Calhoun is getting a body makeover with eyes on becoming playable at second base.

The reason Calhoun — the club’s No. 4 prospect per MLBPipeline.com — hadn’t played in a Cactus League game until Sunday is that he’s the latest Dodger undergoing a body makeover through the direction of Brandon McDaniel, the team’s strength and conditioning coach, and his dietician wife, Andrea.

Calhoun has bought into the overall plan, and he has even moved in with the McDaniels this spring to take advantage of Andrea’s cooking skills. “They welcomed me with open arms, and I couldn’t pass it up,” Calhoun said. “If I wanted to get out there and be quicker, I had to change my diet from all the fast food we eat. Now, seeing how his wife prepares food, it’s not just about baseball, and I’m buying into that a lot.” Calhoun said he lost nine pounds in the first two weeks of the program, which manager Dave Roberts called “a crash course in a lot of things. To be a complete baseball player is really important, and learning to take care of his body is important. We’re hitting him from all angles, and he’s really working hard.”

Supposedly this has led to defensive improvements, but we’ll see.

Roberts said Calhoun has already shown drastic defensive improvement. Calhoun, an outfielder in college, said moving to the infield has been just one of many challenges. “It’s all a learning process,” Calhoun said. “But I look at it as a good thing. The front office is motivating and pushing me to be a better player. It’s a blessing in disguise. If they didn’t do this, it would show they didn’t care about me as a player. It can be frustrating, but with my work ethic, I think I’ll be a good second baseman at the big league level.”

Seems like we’re repeating this over and over again, but I think most agree that if Calhoun can even get to fringy with the glove, he’ll be a productive regular.

Walker Buehler recently talked about his increased velocity and his off-speed stuff.

MLBPipeline.com: After working with mostly a 90-96 mph fastball in college, you came back last summer throwing in the mid-90s in short stints and hit 99 during instructional league. What was your reaction when you found out how hard you were throwing?
Buehler: The best bolt I ever threw in college was one 98, a few 97s. In my first live session when I came back, I was in that ballpark. Once I got into real games, I wasn’t shocked by it. Everyone can say it was just the surgery, but they forget all the lifting that goes into coming back from the surgery. I was a year stronger, a year better mechanically. I simplified some stuff and gained 15 pounds. Those things helped.

MLBPipeline.com: The scouting report on you in college was that you had solid secondary stuff across the board: curveball, slider, changeup. What do you think is your best secondary pitch?
Buehler: I’ve always been a curveball-early-in-the-count guy. Honestly now, my stuff since the surgery is so different that I don’t have enough reps to say what my best pitch is. I only have 19 innings, instructional league included, so I don’t know that I can say yet. My curveball is in the mid-80s, my slider is in the upper 80s and my changeup is in the upper 80s. At Vanderbilt, I didn’t throw many curves over 80. Things are just different.

The hype train is understandably running smoothly after how explosive and impressive he looked in his comeback last year. But quotes like this do make you realize that there’s still a ton to do when his stuff has changed so much he’s not even familiar with his own pitch anymore. It’s not a bad thing, just a reminder that the adjustment period is still to come.