Is Joc Pederson on the cusp of a breakout season? 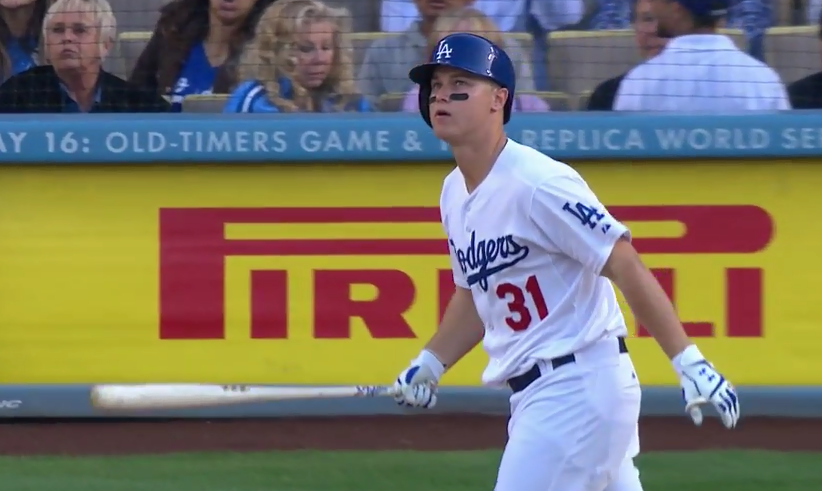 Joc Pederson slugged a leadoff home run to right field against Brewers starter Junior Guerra on Wednesday at Maryvale Baseball Park, and he now leads the Dodgers with three home runs this spring.

Pederson has been working on his swing again this off-season, something he seems to always be tinkering with. And even if it is just Spring Training, it looks as if he could be on the verge of a breakout season with his improved swing and plate approach.

During Pederson’s home run swing he noticeably stepped back with his left leg, transferring his weight and giving him a more balanced swing. The step-back drill is a common baseball hitting technique, one that allows the hitter to keep their shoulders level, control stride length and execute timing better. This was also a practice Andrew Toles used last season.

“I’ve been working on my swing, my path to the ball, and it’s encouraging to see it pay off in the game,” said Pederson, who leads the club with three home runs. “His approach is really consistent, he’s not trying to pull the ball too much,” manager Dave Roberts said of Pederson. “When he’s going hard up the middle, like the line drive to the shortstop [in the third inning], we know he’s in a good place.”

Pederson’s 2016 campaign was a solid showing by the center fielder, and his slugging percentage (.495) and OPS (.847) were second-best on the team behind Rookie of the Year Corey Seager. Joc hit one fewer home run (25) than he did in 2015, but had 74 fewer at-bats. Seager surprised everyone when he revealed that he didn’t even have his “A” swing last year, and this leads one to hypothesize whether Pederson has also yet to achieve his perfect swing.

In his age-24 season, Pederson showed improvement in many offensive categories after tinkering with his swing. He hit better for average by 36 points, his slugging percentage improved from .417 and he finished 2016 with a career-best .847 OPS and 129 wRC+. This was all marked progress in his development as a hitter, but it was primarily against right-handed pitching.

Before right-hand hitting Trayce Thompson‘s season was cut short when he broke his back, Roberts was platooning him with Pederson in center field in order to limit Joc’s exposure to left-handed pitching. Although he only hit .125/.250/.219/.469 with one home run against left-handed pitching last year, he only got 77 plate appearances to work with.

His above-average glove in center field is reason enough to give Pederson the everyday center fielder job. Yet an overall better swing and plate approach along with more opportunity to face lefties, and instilled confidence from Roberts in his ability to succeed against southpaws, would allow Joc to develop into the consistent everyday type player he is certainly capable of being.

The evolutionary tale of Pederson’s swing is one that has been documented well on this site. Dustin wrote about his improved contact rate and more consistent success at the plate last summer after he turned things around after his poor second half in 2015.

“Pederson is showing the kind of player he can and should be in the majors going forward. Yes, he’s somewhat shielded by basically being a platoon player, but he is hell on right-handed pitching. He has made adjustments, has matured at the plate and is still hitting the ball incredibly hard. He isn’t going to win a batting title anytime soon, but he should be a consistently above-average offensive player (which plays up in center field) against right-handed pitching. Here’s hoping he gets a chance, at some point, to hit against lefties to at least see if he has a future against southpaws.”

In terms of raw power, Joc’s ISO (SLG-BA) in 2016 of .249 was identical to Giancarlo Stanton and his teammate Yasmani Grandal, and his extra-base power has improved since he debuted with the Dodgers coinciding with his mechanical adjustments to his swing.

On Sept. 16 of last year, Pederson began his quest to prove that he could hit lefties by donning a facemask when at-bat against them. It was a conscious effort to mentally combat left-handed pitching, a battle the entire club was engaged in during the season. Event though it was a small sample size, Pederson improved against lefties after he started wearing the facemask (16 wRC+ before Sept. 16 and 132 wRC+ after Sept. 16). With his protective covering in place in the postseason, he got on base five times in 15 plate appearances against LHP.

It’s not irrational to believe that Pederson can find some consistency and at least put up league-average results against LHP. Or he could surprise us all with his new facemask on order for the 2017 season, and hit a bunch of dingers against everyone.

Let’s document Dustin’s prediction that calls for a big season from Joc.

Prediction that’s sure to make me look silly: Joc Pederson is going to hit 33 home runs in the 2017 season.

I’m not sure if the tinkering and adjustments will ever be done when it comes to Pederson’s swing, but so far this spring it looks as though he continues to fine tune his mechanics with promising results thus far. Pederson may often times be overlooked as one of the Dodgers’ top offensive contributors because of Seager’s ability to captivate the attention with his talent, but a big season from Joc at the plate utilizing his refined mechanics could draw attention back to his both his defensive capabilities in center field as well as his contributions with the bat. With his work and production, he has at least earned himself a shot at becoming the Dodgers’ full-time center fielder.

Stacie Wheeler, born and raised in So Cal, has been writing about the Dodgers since 2010. She wrote daily as the co-editor of Lasorda's Lair for five long years, and she has also written for Dodgers Nation, Dodger Blue 1958 and The Hardball Times. She currently contributes to True Blue LA. Stacie graduated from the University Of Southern California with a bachelor's degree in Cinema-Television. You can also watch her videos on her YouTube channel, DishingUpTheDodgers.
@StacieMWheeler
Previous 2017 Dodgers prospect rankings from other publications, plus ‘consensus’
Next Yasiel Puig scalded two massive dongs tonight