2016 Dodgers in Review: OF Joc Pederson 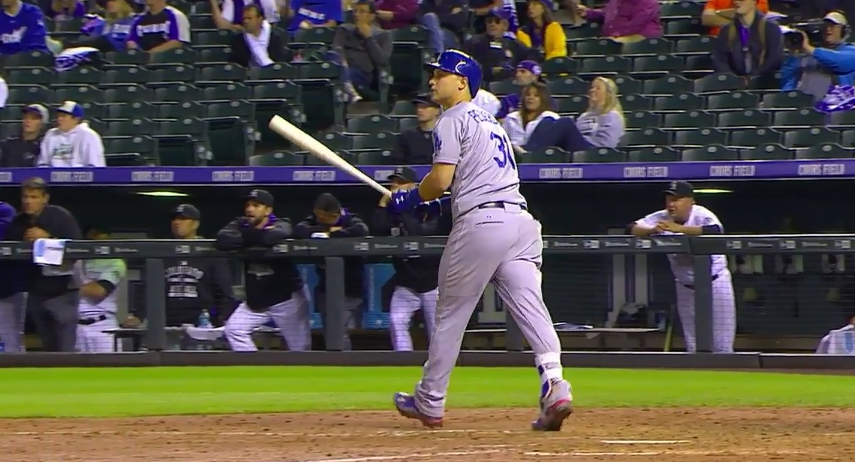 What happened in 2016: Avoided the sophomore slump and ended up being the Dodgers’ second-most productive hitter.

After a successful 2015 season that saw him tail off terribly in the second half of he season, Joc Pederson began his 2016 season by tinkering with his swing in spring training. Chad chronicled it as it was happening.

Those changes had mixed results early on. Pederson was hitting for power, but he still had difficulty making consistent contact. He was being platooned, which I pointed out and thought was the wrong course of action.

“At least, that’s what it feels like in the early going. Joc Pederson didn’t start on Thursday night against Robbie Ray. I made note of it in the game thread. The fact is, it seems like he has been relegated to a platoon role. This isn’t a slight at Trayce Thompson by any means. He’s talented and deserves a chance to show what he can do. But Pederson’s development shouldn’t be stunted, impeded, stifled, et al, to get Thompson playing time. There are other ways to get him into the lineup (especially with Scott Van Slyke on the disabled list). I’m not saying Pederson needs to play every single game against left-handed starters, but he has not started against a lefty starting pitcher this season, and he has just three plate appearances against them.”

The trend would continue for most of the season. Pederson ended up with a .125/.250/.219 slash line against lefties, but he got just 77 plate appearances against them. It sounds like he’ll be given a chance to play everyday in 2017.

Pederson didn’t crest 500 plate appearances because of platoon issues, but because of a fantastic catch he made in Milwaukee at the end of June.

“The biggest thing that has changed with Pederson is his contact rate. He had the second-worst contact rate in all of baseball last season (among qualified hitters) at 66.7 percent, just ahead of probable 2016 NL MVP Kris Bryant at 66.3 percent. This season, he has improved it by almost 10 percent (76.5), which is a marked and massive improvement.”

“Pederson is in the company of guys like Karim Garcia, Bill Hall and Austin Kearns in terms of 9-10 percent improvements in contact rate. Not exactly Murderers’ Row, but he’s also in the company of former All-Stars Jason Bay and Mike Sweeney … and some guy named Barry Bonds. A deeper dive into the plate discipline stats show an incredible jump in contact on pitches outside the strike zone (from 49 to 63.2 percent) and a big jump on pitches inside the zone (77 to 85.3 percent). This has come with an overall swing rate that is actually down by 0.6 percent from last season. His swing percentage on pitches out of the zone is only up 1.4 percent, while his swings on pitches in the zone is down 3 percent. Unsurprisingly, his swinging strike/whiff rate is down dramatically — from 14 percent last season to a slightly above league-average 9.8 percent now — which leads to the strikeout rate also being down more than 4 percent from last season.”

“There honestly aren’t a ton of differences in his batted ball numbers from the first half to the second half. His ground ball, fly ball and line drive rates in the first and second halves are within a percentage point of each other. The biggest thing is his BABIP has jumped 100 points in the second half (.272 to .370), and he’s hitting the ball harder in the second half. He had an average exit velocity of 92.7 MPH in the first half (still really good), but it’s up to 95.6 MPH in the second half — second-best in baseball behind, of course, Pedro Alvarez. As Sullivan notes, Pederson hasn’t sacrificed his power and the ability to hit the ball hard while making more contact. Last season, Pederson was 25th in baseball with an average exit velocity of 92.3 MPH, and this season, he’s 19th at 93.2 MPH. His launch angle is up 4 degrees from last season, resulting in a more than 3 percent increase in line drives.”

Pederson saw his contact rate jump from 66.7 percent in 2015 to 75 percent in 2016. Conversely, his swinging strike rate drop almost 4 percent from 2015 to ’16. Despite some gaudy strikeout numbers, he’s hitting for power and making more contact.

His standout postseason moment came in Game 5 of the National League Division Series. With the Dodgers trailing 1-0 in the seventh inning, he hit Max Scherzer‘s first pitch out to straight-away left field to tie the game.

2017 status: Pre-arb. He’ll be the Dodgers’ starting center fielder for the next (at least) four years. The Dodgers would be smart to explore a contract extension with him.

Dustin Nosler began writing about the Dodgers in July 2009 at his blog, Feelin' Kinda Blue. He co-hosted a weekly podcast with Jared Massey called Dugout Blues. He was a contributor/editor at The Hardball Times and True Blue LA. He graduated from California State University, Sacramento, with his bachelor’s degree in journalism and a minor in digital media. While at CSUS, he worked for the student-run newspaper The State Hornet for three years, culminating with a 1-year term as editor-in-chief. He resides in Stockton, Calif.
@DustinNosler
Previous Spring Training Notes: Hyun-Jin Ryu’s healthy start, Trayce Thompson is … back
Next Podcast: ‘Dugout Blues’ episode 188 – Puig, Ryu, Thompson, Kazmir