About that 10th inning…

The Dodgers lost in 10 innings to the Giants on Wednesday night, but you already knew that. How they lost was perhaps one of them most frustrating ways in recent Dodger memory (with the added frustration being it was against San Francisco).

First, let’s just get this out of the way: There’s no way Kenley Jansen was pitching on the road in the ninth inning of a tie game. No manager does that. Ever. He had an extended outing the night before (1 1/3 IP, 22 pitches). The Dodgers were more willing to lose that game with Ross Stripling on the mound than win it with Jansen at any point. That’s on Dave Roberts. It’s fine, I guess. I mean, it’s only April, but these losses — especially in the division — still count.

Now, onto the 10th inning. Stripling, in his second inning of work, allowed a leadoff single to Gorkys Hernandez, a stolen base, issued a walk to Conor Gillaspie and Adrian Gonzalez completely blew a chance to record an out on a Nick Hundley sacrifice bunt. Bases loaded, no outs.

Then came the 10-pitch battle with Hunter Pence. As an extreme ground ball hitter, I can see the Dodgers attempting to attack the top of the strike zone against him — on some level. But with no outs, a fly ball to medium deep anywhere (except maybe right field) probably wins the game because of Hernandez’s plus-speed.

The first high fastball was the only one Pence swung through. And calling for a high fastball on a 0-0 count is questionable in and of itself. The next nine pitches were all in a similar location. 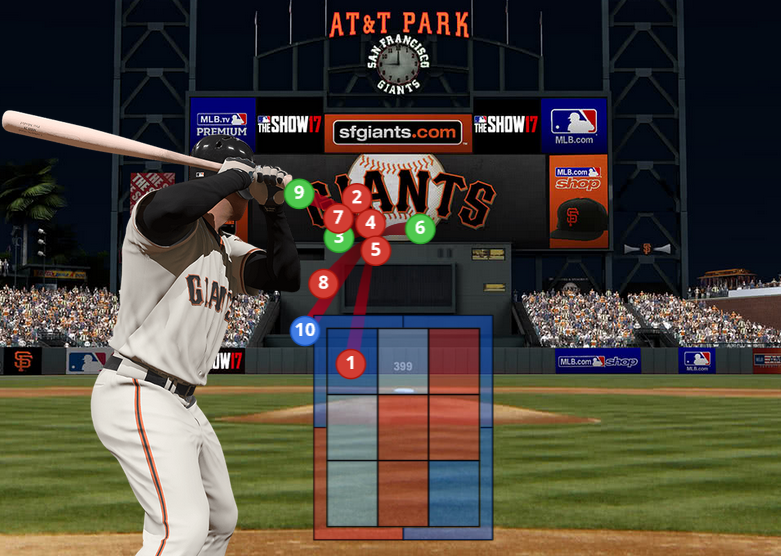 Not one pitch below the belt. Pence had a 61.3 percent ground ball rate coming into the game, yet everything was up in the zone. Sure, Stripling isn’t an extreme strikeout pitcher, but you have to think after about five or six pitches in the same general location — with Pence fouling off some almost unhittable pitches — would warrant a change of eye level and/or pitch type.

Coming in to the game, Stripling had thrown his fastball almost half the time (47.9 percent), with his slider being his next most-used pitch (33.6 percent). Against right-handed hitters, it’s a 54.6/29.1 percent split. Many folks were calling for the curveball, which he threw three times in his outing, but it was really the slider that Stripling needed to throw. Hell, I would have taken anything but a high fastball.

Stripling had induced just one swinging strike on his slider before last night (and was 1-for-7 last night). While a strikeout would have been nice, getting the ball lower in the zone could have been just as effective — either resulting in a strikeout, ground ball or something else.

On the flip side, Pence had seen 93 sliders before last night and whiffed on more than a quarter of them (25.8 percent). His fastball whiff rate was 13 percent. He was hitting just .192 against sliders and a robust .440 against fastballs. If you break it down to just right-handed pitchers, he was hitting .536 against fastballs and .182 against sliders. Let’s go one step further.

It’s a small sample size both for Pence and Stripling’s usage, but it just seemed like a bad idea from the start.

Ironically, Stripling induced a double play in the ninth inning off the bat of Christian Arroyo … on a slider.

I’ll just say this: After that long of an at-bat, Stripling had a better chance of getting Pence to fail against a non-fastball (most likely the slider, according to the usage data above) than a high fastball. It was clear Pence was all over it, even after Stripling ramped up the velo. Why Yasmani Grandal didn’t call for another pitch, or insist on one, is beyond me. That entire sequence was infuriating.

I’m not saying Pence wouldn’t have hit a grounder through the drawn in infield to win the game anyway, but I’d almost rather the team lose that way than to do something 10 times in a row and be surprised when it doesn’t work.

All of this could have been avoided if Sergio Romo and Pedro Baez had done their respective jobs, but hey, that’s baseball.

Dustin Nosler began writing about the Dodgers in July 2009 at his blog, Feelin' Kinda Blue. He co-hosted a weekly podcast with Jared Massey called Dugout Blues. He was a contributor/editor at The Hardball Times and True Blue LA. He graduated from California State University, Sacramento, with his bachelor’s degree in journalism and a minor in digital media. While at CSUS, he worked for the student-run newspaper The State Hornet for three years, culminating with a 1-year term as editor-in-chief. He resides in Stockton, Calif.
@DustinNosler
Previous Giants 4, Dodgers 3: Another pathetic pen showing blows game for Alex Wood
Next Dodgers @ Giants April 27, 2017: Happy Julio Urias Day