Alex Wood is better than Clayton Kershaw. Well, at least he has been this season.

In 20 fewer innings, Wood has been worth 1.6 fWAR, compared to Kershaw’s 1.4. In fact, he bests Kershaw in every significant pitching category except one.

Small sample size must be invoked here, but Wood’s start to the 2017 has been remarkable. Because he has been bounced between the rotation and the bullpen, it’s not surprising to see him averaging barely five innings per start. That should go up as he sticks in the rotation.

And that’s what’s going to happen. Dave Roberts has already said Wood will remain in the Dodgers’ rotation despite the fact Rich Hill and Brandon McCarthy are due back this week. With the impending rotation crunch, this is where Andrew Friedman, Farhan Zaidi and Roberts will make their money.

The locks to remain in the rotation are Kershaw, Wood and Julio Urias. Despite Urias’ struggles of late, Roberts has said he’s here to stay and the club does not want to pitch him out of the bullpen. That leaves two spots for four pitchers.

Kenta Maeda is on the disabled list, but he is coming off his best outing of the season (and maybe of his career). He deserves a chance to stick in the rotation. Hill is coming back from the blister injury and is, probably, the second-best starter (when things are going right) on the club. McCarthy’s disabled list stint was for his non-throwing shoulder he injured lifting weights, so there’s no reason to think he’s really that hurt. Hyun-Jin Ryu had a rough start on Thursday night in Colorado and he will be the odd man out. Either he’ll go to the bullpen or on the DL again. He is not one of the five best starters on the team, and it isn’t just because he has been roughed up at Coors Field a couple times.

If Madea sticks, then it’s down to Hill and McCarthy. There had been talk of the Dodgers using Hill out of the bullpen when he came back from his second DL stint. Seeing as McCarthy has been generally solid and doesn’t have a lot of bullpen experience, that might be the best way to maximize the talent and lack of innings to go around.

Things could change, as the often do in baseball. Maybe Urias goes on the DL to not only open a rotation spot, but also to limit his workload. If they don’t abuse use the 10-day DL to their advantage in this scenario, it seems a Kershaw-Wood-Maeda-Urias-McCarthy rotation might be best for now. If/when Hill shows he can handle a starter’s workload again — and no one is injured — McCarthy’s stuff would play well coming out of the bullpen. It’d just be a matter of him adjusting to the role, even if for just a short time.

Back to Wood and his dominance for a moment. His changeup and curveball have been good this season, but they’re actually producing fewer swinging strikes than last season.

Not a steep decline, but a decline nonetheless. Where he has made up for it has been with his sinker/4-seam fastball. He has gotten 24 whiffs on his sinker/4-seamer this season after getting just 22 last season in 241 fewer pitches. This can be attributed to better command of the pitch, but it’s more likely because of increased velocity.

“As previously mentioned, Wood’s 90.6 mph average fastball was his highest since 2013, and even in relief last year he averaged about 91 mph. Well so far in 2017, he’s seen that figure spike to 93.9 mph, which is an enormous uptick. Velocity has been shown to be valuable as it correlates well with performance, and a spike like this could indicate he’s ready to have a breakout season, regardless of role. Of course, there are always necessary qualifiers. Despite the fact that he’s averaged around 94 mph in both a starting and relief role this year, and despite the fact that velocity tends to stabilize quickly, it is still just 5.2 innings of work and we probably want to see if it holds up as he gets an increased workload. Also, there appears to be a velocity spike associated with a change in measuring system, and we don’t know how much can be attributed to that. Unlikely to be four ticks worth, but any significant result could dull the excitement around this bump a bit. And there’s also the chance that, as a mechanics tinkerer, Wood’s mechanics could regress at some point in the future and he’d be back at square one.”

As you can see, his velocity has trended up in the last two seasons on all his pitches. 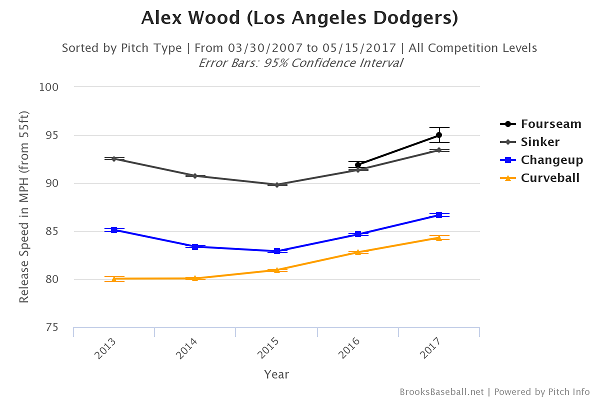 It’s still yet to be determined to see if this is as a result of switching from PITCH F/X to Statcast, but, as Chad said, it probably doesn’t account for a 3-4 MPH increase.

One thing’s for sure: Wood isn’t going back to the bullpen anytime soon. He has been the Dodgers’ best pitcher this season, and the results bear it out. This is exciting for people who long have thought Wood was indeed a good starting pitcher. He might not be this good (i.e., better than Kershaw), but he definitely has a No. 2/3 upside, and, so far, he’s showing it.

I’ll just close with this: #AW2SD.

Dustin Nosler began writing about the Dodgers in July 2009 at his blog, Feelin' Kinda Blue. He co-hosted a weekly podcast with Jared Massey called Dugout Blues. He was a contributor/editor at The Hardball Times and True Blue LA. He graduated from California State University, Sacramento, with his bachelor’s degree in journalism and a minor in digital media. While at CSUS, he worked for the student-run newspaper The State Hornet for three years, culminating with a 1-year term as editor-in-chief. He resides in Stockton, Calif.
@DustinNosler
Previous Rockies 9, Dodgers 6: Until September, Coors Field
Next Podcast: ‘Dugout Blues’ episode 197 – Kershaw, Wood, rotation, Toles, Buehler