Dodgers shouldn’t give up on Sergio Romo quite yet

The Dodgers took a late-offseason flyer on Sergio Romo. For $3 million, it looked like a bargain because Romo has been a constant performer throughout the course of his career. With the Dodgers needing a good late-inning relief option not named Kenley Jansen, they were hoping Romo would be that guy.

Romo’s swinging strike rate is 14.4 percent — right in line with his career average and down just a half a percent from last season. When the rate is that high, losing half a percent isn’t that big a deal. His velocity has been better than last season when he missed time with a sore elbow.

But we all know Romo doesn’t thrive on velocity. His fastball runs above average, according to FanGraphs, is -0.1 this season and just +6.3 for his career. His slider is how he makes his living. It has been positive every season of his pro career — except this one. It sits at -2.4 right now after checking in at 7.5 last season. For his career, it’s 70.7. So, it’s clearly the problem for him. What’s happening with it? Let’s take a look. 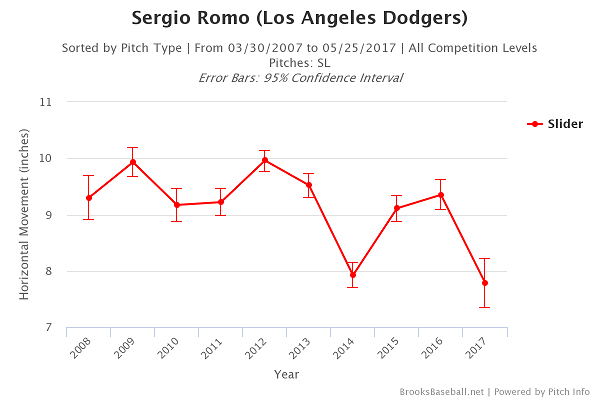 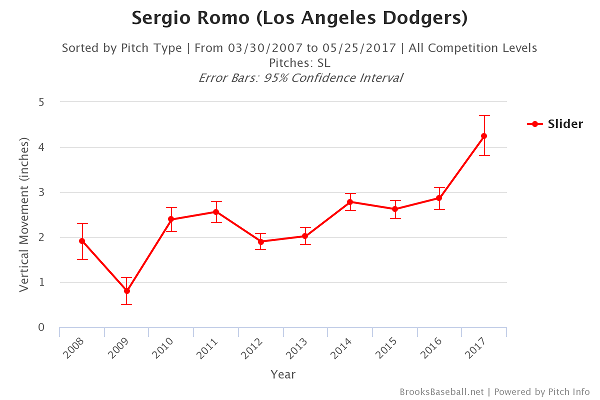 Because Romo doesn’t throw a curveball, batters know if they see a bigger loop coming out of his hand, they’re going to know it’s a slider. And since it isn’t breaking as much horizontally, it isn’t as effective.

He’s still getting whiffs on the slider to the tune of 19.05 percent. That’s up 2 percent from last season. But, his fly balls per balls in play rate on the slider has jumped to 40 percent, possibly because of more vertical movement. And this shouldn’t be a surprise: All four of the home runs Romo has allowed have come on the slider. Hitters have a .359 ISO against it, which is bad. If he can fix his issues with the, he might be able to get back on track. But that isn’t a guarantee.

Romo, surprisingly, has been at his best in high-leverage situations, even though he has no business throwing in them right now. He’s allowed just a .133/.235/.133 triple slash in 17 high-leverage plate appearances. It’s definitely a case of small sample size, and he was signed to be a high-leverage pitcher (mostly against righties), but so far, he hasn’t been dependable.

I know there are folks calling for the Dodgers to DFA Romo. That would be hasty, especially since he isn’t making a lot of money and there is enough evidence that shows he might still have some value to this team. But if he continues to struggle, the Dodgers won’t hesitate to cut the veteran loose in favor of someone who would be able to help. We’re a ways off from that happening, though.

Dustin Nosler began writing about the Dodgers in July 2009 at his blog, Feelin' Kinda Blue. He co-hosted a weekly podcast with Jared Massey called Dugout Blues. He was a contributor/editor at The Hardball Times and True Blue LA. He graduated from California State University, Sacramento, with his bachelor’s degree in journalism and a minor in digital media. While at CSUS, he worked for the student-run newspaper The State Hornet for three years, culminating with a 1-year term as editor-in-chief. He resides in Stockton, Calif.
@DustinNosler
Previous Cardinals 6, Dodgers 1: A wild Rich Hill appears
Next Cardinals @ Dodgers May 25, 2017: Maeda vs. Wacha for the series win