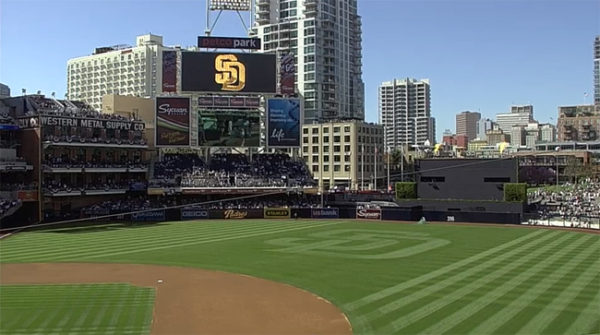 Last night’s fireworks on offense and in front of the Padres’ dugout will be hard to follow up. However, the offense may be in shape because they will be facing Dillon Overton, who is making his first start for the Padres after being DFA’d by the Mariners early this season.

In nine games (only one of which was a start), Overton posted an ERA of 6.38 and a FIP of 5.43 for Seattle. Overton only struck out eight batters in that time, though he only walked two. Overton is left-handed and features three pitches: a fastball around 90, a change around 82, and a curve in the mid-70s. Overton pitches from a high arm slot, so his lack of a slider will limit the expected platoon split against him.

Of course, that hasn’t stopped the Dodgers from  deploying a right-handed heavy lineup. Yasmani Grandal gets the day off, with Austin Barnes getting the start again after his huge night yesterday. Oddly, Yasiel Puig is also sitting in favor of Trayce Thompson. This likely is at least partially due to his leg issues, but it’s part of a broader pattern which seems to indicate that the Dodgers think Puig’s small sample reverse splits have some amount of reality to them. I disagree with this, and at a certain point it’s putting Puig in a position where he’s less likely to succeed long-term. The nagging leg issues continue to be a thing, but can’t they rest him against his weak platoon side instead?

Rich Hill starts tonight for the Dodgers, attempting to follow up on his best outing of the year. The Padres are a good team to get well against, but Hill’s issues seem much more related to mechanics (specifically release point) than the opposing offense, unless they feel like swinging at curveballs three feet out of the strike zone. One thing to watch for is Hill’s new cutter, which he threw much less in his second start since introducing it. That’s probably because his curve didn’t need supplementing when he was able to locate it, but he also didn’t drop the additional change of speed entirely.

Mike Freeman was optioned before today’s game and has been replaced by Josh Fields, who was recalled from Oklahoma City. Fields has only pitched in three minor-league games since he was optioned two weeks ago and allowed one hit and no runs. With Brandon Morrow working his way into Fields’ old role, this move is more along the lines of insurance in case Hill pitches another short outing.

In injury news, Adrian Gonzalez will not be back until after the All-Star break. This isn’t surprising, since the All-Star break is in just more than a week and Gonzalez has not yet started a rehab assignment, which he will likely need at this point.

Dave Roberts received a one-game suspension for bumping Andy Green in last night’s altercation. He will serve the suspension tonight, and Bob Geren will manage the game in his place.