Turns out, Brandon McCarthy is the guy we thought he was

Brandon McCarthy has never been viewed as a big strikeout guy. Despite having good stuff, he hasn’t really been a guy who’s going to be mistaken for Max Scherzer in terms of strikeouts. But when the Yankees acquired him from the Diamondbacks in 2014, they allowed him to start throwing his cut fastball again, which the D-backs wouldn’t out of fear of injury. His strikeout numbers increased and made himself a more attractive pitcher for his impending free agency. The newly installed Dodger front office pounced on what they thought was a pitcher who had reinvented himself and was, potentially, on the verge of a real breakout.

That looked like the case when he made his Dodger debut in 2015. Yes, the ERA was ugly. Yes, the FIP was really bad. But McCarthy had shown the potential the front office saw in him. He struck out 29 hitters in 23 innings and had an elite-level 30.9 K%. This was the guy Andrew Friedman, Farhan Zaidi and Co., were getting when they gave him the 4-year, $48 million deal.

Well, he missed the rest of the 2015 season with Tommy John surgery and didn’t come back until July 3, 2016, but then he came out pitching as well as he ever had. He had a 2.39 ERA, 2.65 FIP, .144 batting average against and, more importantly, a 33.3 K%. A hip issue and the yips got him in the middle of August and derailed the rest of his season. Fortunately, McCarthy even came out firing this season. Through the first two months, he had a 3.28 ERA, 3.05 FIP and a 22.0 K%. Not as great as last season, but plenty fine for a No. 3/4 starter, especially since Rich Hill struggled so much to begin the season.

But the strikeouts have fallen in the last three seasons. In his first two seasons with the Dodgers — admittedly small sample sizes — McCarthy was much better at getting strikeouts than he has been this season. The front office’s bet on McCarthy looked like it might pay off, but as of yet, it hasn’t.

Here’s a look at his strikeout numbers in the last 3 1/2 seasons:

What’s interesting is he was better at getting strikeouts in 2016 yet his swinging strike rate was lower than it has been this season. It can be attributed to a 31.8 percent looking strikeout rate. If he had enough innings, that rate would have tied him for 15th-best in baseball with Steven Matz. It was a better than 5.5 percent increase from his career rate coming into the season. In 2017, it has fallen to 24.2 percent, about 2 percent less than his career mark. McCarthy is getting fewer looking strikeouts, but it doesn’t seem like it’s enough to shift his overall strikeout numbers that much.

A deeper dive into his pitches shows it could be his curveball and cutter that are hurting his strikeout potential. 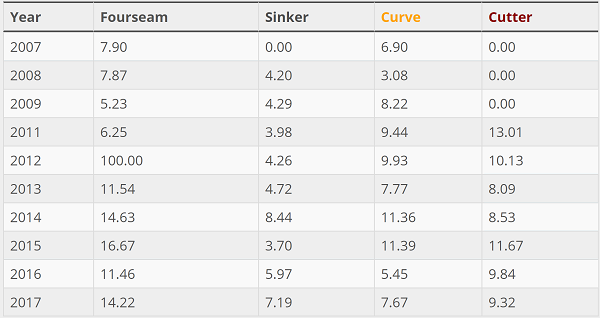 Just a note: That 100 percent in 2012 on his 4-seam fastball is probably a mistake in classification because it was the only 4-seamer he threw all season (114 innings).

But if you look at his curveball in the last four seasons, it has taken a significant step back in terms of being a swing-and-miss pitch, and what’s weird is the data lead us to believe there isn’t much wrong. The velocity is fine (80-81 MPH), and while the horizontal and vertical release points are up on the pitch, but it’s up on all his pitches since last season. The spin rate on his curveball is up from 2016, so it isn’t a spin issue. The only thing that makes sense is the horizontal movement. 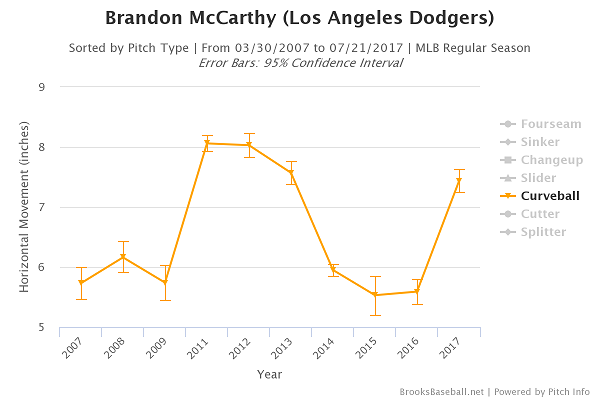 This is odd because he established a career-best in whiff rate on his curveball in 2015 (and it was just as good in 2014) with much less horizontal movement. So, it’s anyone’s guess what’s happening with his curveball.

McCarthy’s cutter, which he began throwing again after the Yankees acquired him in the summer of 2014, has been a weapon for him ever since. Again, though, the available data fail to shed much light on the situation. The velocity on it is actually a little higher than last season. The release points aren’t an issue. The spin rates are virtually the same, even though spin rates don’t play much into a cutter’s effectiveness. The movement on his cutter might explain a little more than it did on the curveball.

Same thing goes for horizontal movement. It’s almost in line with 2011, but on the opposite spectrum from just two years ago.

Again, the sample sizes must be taken into account, but it’s clear McCarthy has a lack of strikeout issue happening here. If anything, his 2015 performance is the real outlier, but the changes from just last season are significant and a little confusing. McCarthy has never been big swinging strike guy, but to see his strikeout rate dip in three consecutive seasons without a clear reason why (other than 2015 being an anomaly, which it may have been) is a bit of a head scratcher.

Factor in the yips from last year, a few of the shaky innings/outings and the blister (because of course) this year, and I’m not sure how much the team can rely on McCarthy come October. He’s one of the most talented pitchers on the team, but he’s currently slated as the No. 4 starter, and a guy who — since the beginning of June — is a 5-inning pitcher. Prior to June, he was averaging 5.8 innings per start. Despite that, I’m not sure Kenta Maeda or Hyun-Jin Ryu supplant him in the rotation anytime soon.

The trade deadline is 10 days away. Without the luxury of adding Julio Urias to the rotation for the stretch run, the Dodgers just might need to look into acquiring a more reliable starter.

McCarthy has been solid this season, even if he hasn’t been great of late. More strikeouts might help, but that might not be the guy he is anymore. Brandon McCarthy is the guy who we all thought he was, and there are worse No. 4 starters to have.

Dustin Nosler began writing about the Dodgers in July 2009 at his blog, Feelin' Kinda Blue. He co-hosted a weekly podcast with Jared Massey called Dugout Blues. He was a contributor/editor at The Hardball Times and True Blue LA. He graduated from California State University, Sacramento, with his bachelor’s degree in journalism and a minor in digital media. While at CSUS, he worked for the student-run newspaper The State Hornet for three years, culminating with a 1-year term as editor-in-chief. He resides in Stockton, Calif.
@DustinNosler
Previous Braves 6, Dodgers 3: 11-game winning streak ends, baseball back to normal
Next Braves @ Dodgers July 21, 2017: Alex Wood to start a new streak