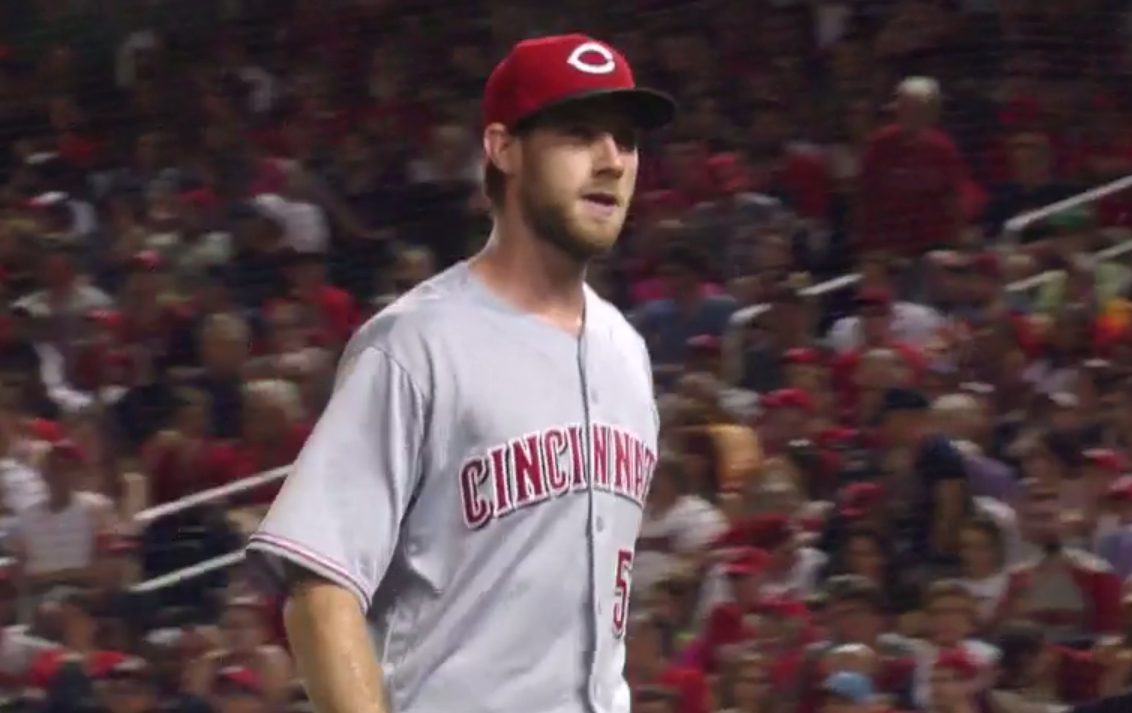 While most were already unimpressed with the acquisition of Tony Watson from the Pirates, the Dodgers one-upped even that move, also trading with the Reds for left-handed pitcher Tony Cingrani, according to Ken Rosenthal of Facebook (!!!).

The cost was outfielder Scott Van Slyke and catcher Hendrik Clementina, according to Joel Sherman of the New York Post.

#Dodgers traded Van Slyke an Clementina to #reds for Cingrani

His 2017 has been … interesting. In 25 relief appearances spanning 23.1 innings, Cingrani has 24 strikeouts and just six walks, basically getting back to his strikeout and walk ratios from early in his career. Underrated gem, right? Well, not quite, as he has a 5.40 ERA and a 7.01 FIP thanks to somehow giving up a whopping nine homers.

How does that happen?

Well, when the heat map for your fastball looks like this… 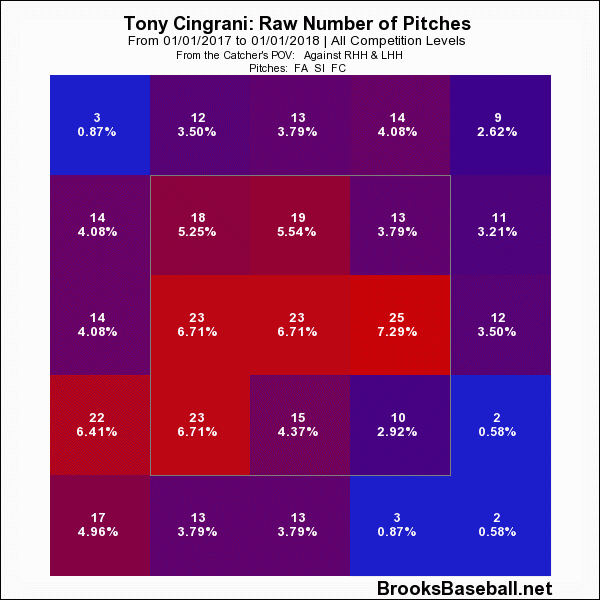 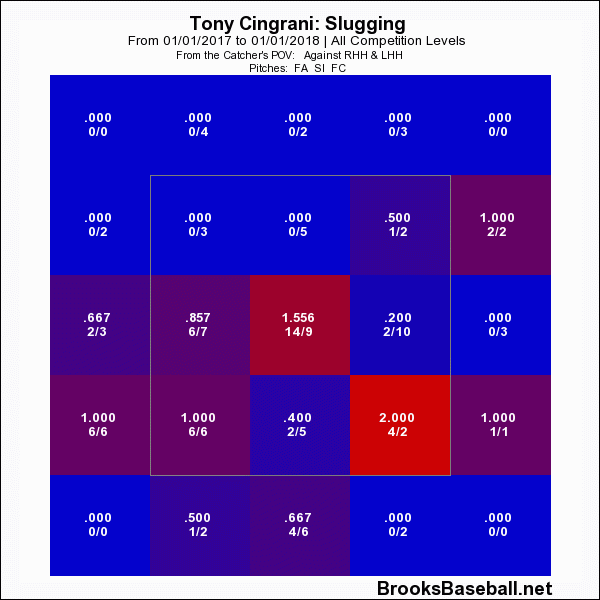 …things don’t tend to end well. As such, it’s hard to say all the homers he’s given up was simply poor luck, as he’s been throwing pitches to hit and been getting shelled for it.

Of course, the Dodgers traded for him for a reason. Cingrani is a former consensus Top 100 prospect, and his 94.4 mph on the fastball is the fastest its ever been, so it’s not the arm that’s been a problem. However, he’s still thrown that fastball 88.4% of the time, and when hitters can sit on it and it’s being thrown over the middle of the plate, it’s hard for Cingrani to find success. The Dodgers will either have to work on developing the slider that he uses 2.4% of the time, or continue to develop a new splitter that he just started using this year at a 9.2% rate. It’s a tough ask, but combine that with improved fastball command, and you have a potential back-end lefty reliever. Whether Cingrani actually manages to fix what’s gone wrong should be interesting to monitor.

Cingrani has two more years of team control after this in his second and third years of arbitration, and this year he’s making $1.83 million.

SVS seems like he’s been around forever, and indeed he has been on Dodger teams since 2012. While he had brief stretches of usefulness in 2013 and 2014, he’s become more and more unplayable as his OPS has declined from .700 to .606 to .543 from 2015-17. The Dodgers basically had no use for him anymore, especially going forward when Andrew Toles is back and with Alex Verdugo waiting patiently in AAA. Amazingly, because he’s missed so much time, he still has two more years of team control after this in his third and fourth years of arbitration. SVS makes $1.325 million in 2017.

Clementina is a 20-year-old catcher in Rookie-ball, currently hitting an impressive .370/.439/.554/.994. Again though, he’s 20 in a hitter’s paradise in Ogden, and had never shown the ability to hit all that impressively before. Besides, the Dodgers have at least Will Smith and Keibert Ruiz ahead of him in the catcher prospect pecking order, so he was expendable and this was probably his greatest use to the Dodgers.

Make no mistake, Cingrani is currently terrible and is a bit of a project, but the Dodgers are betting on talent and Rick Honeycutt here. In doing so, they’re giving up nothing they’ll miss, so while this isn’t necessarily a trade that might help them in 2017, it seems like the type of smart trade that could pay off over the next two years if Cingrani even gets decently right again.