Hello, Comerica Park. The Dodgers (85-34) go for their 35th road win of the season when they open a three-game weekend interleague series against the Detroit Tigers (53-67) on Friday evening. With 43 remaining games to be played in the regular season and a 19 game lead over the D-backs and Rockies, the Dodgers virtually have a lock on their fifth consecutive NL West title. Their incredible pool of talent will only get deeper when veterans return from lengthy stints on the disabled list including Adrian Gonzalez who makes his return Tuesday.

Gonzalez has only played in 49 games this year for the Dodgers, batting .255/.304/.339/.643 with a home run in 165 at-bats. His power noticeably diminished, but the butter and eggs were never completely off the table. Even though Gonzo’s time as a starting player for the Dodgers is all but gone — especially with the emergence of Cody Bellinger — he’s a valuable asset off the bench for Dave Roberts down the stretch and into the postseason. Being the experienced veteran that he is, he’ll contribute wherever and whenever needed. After all, the Dodgers have gone 76-23 since Bellinger was recalled from Triple-A Oklahoma City.

Gonzo starts at first base, batting seventh in the series opener. Last week Dustin wrote about the lineup decisions Roberts will have to make when Gonzalez returns, and we can see some shifting and experimenting with Friday’s lineup. Chris Taylor will get a start at shortstop, giving Corey Seager a breather and designated hitter status. Cody Bellinger is starting in left field, and Yasiel Puig slots into the sixth spot again.

The weekend series in Detroit is a timely opportunity for Gonzalez to be the Dodgers’ designated hitter at least once (Sunday), a role he would perfectly be suited for in a World Series situation.

Something to watch for: Gonzalez is four hits shy of 2,000 career hits.

Rich Hill (8-4, 3.44 ERA, 3.97 FIP) makes his 18th start for the Dodgers this year in the series opener, coming off a scary start in which he got struck in the throat with a pitch. I have no idea how he continued pitching after the injury, and it will be interesting to see if there are any residual issues.

Hill, who was drafted out of the University of Michigan, hasn’t really been able to duplicate his dominant July this August so far. He had an impressive stretch going 4-0 with a 1.45 ERA last month, but Hill’s allowed five runs on 11 hits including four home runs in two starts (11 innings) this month. The home runs are concerning. He also walked three in his last start against the Padres, a rare Dodger loss.

Hill has pitched at Comerica Park in the past with one start in Detroit last year with the A’s and appearances in seven games overall. He’s 1-0 with a 2.31 ERA with one home run allowed in 11 2/3 innings pitched in the Motor City. He’s 2-0 with a 3.42 ERA in 15 games (two starts) against the Tigers in his 13-year career. He’ll have to be careful pitching to Victor Martinez and Miguel Cabrera, who both have four hits against Hill.

The Dodgers are pretty familiar with Detroit starter Jordan Zimmermann (7-9, 5.62 ERA, 5.46 FIO), whom they faced eight times when he was with the Washington Nationals. The right-hander is coming off a disastrous 3 1/3 inning start against the Twins. He allowed seven runs on eight hits, but his teammates rallied to score a dozen runs to edge out Minnesota 12-11.

Overall, Zimmermann is 2-2 with a 4.40 ERA against the Dodgers. Justin Turner is hitting .571 against Zimmermann, going 4-for-7 with a double and a home run.

The Dodgers may have to face some tough starting pitching in the series with Zimmermann, Michael Fulmer and Justin Verlander, but there’s no doubt they’ll feast on Detroit’s bullpen. Brad Ausmus‘ relief squad is dead last in the majors with a combined ERA of 5.28 and 1.49 WHIP this year. They don’t allow many home runs (61), but opponents are hitting .268 against them.

The Dodgers’ magic number for the NL West title is now 24, and the Giants’ elimination number is 4 going into Friday’s game. 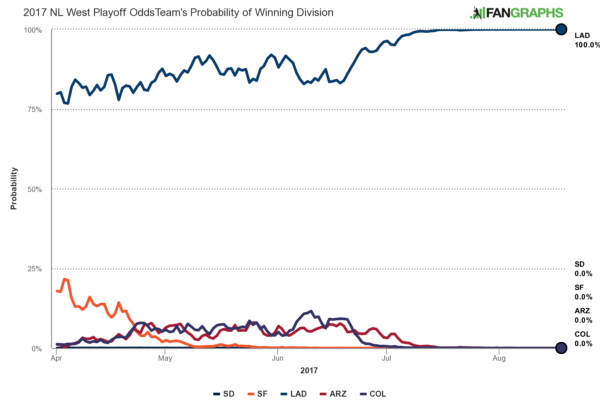 I hope the Dodgers have put in an early champagne order this year.

Stacie Wheeler, born and raised in So Cal, has been writing about the Dodgers since 2010. She wrote daily as the co-editor of Lasorda's Lair for five long years, and she has also written for Dodgers Nation, Dodger Blue 1958 and The Hardball Times. She currently contributes to True Blue LA. Stacie graduated from the University Of Southern California with a bachelor's degree in Cinema-Television. You can also watch her videos on her YouTube channel, DishingUpTheDodgers.
@StacieMWheeler
Previous Dodgers have built baseball’s deepest catching corps
Next Dodgers 8, Tigers 5: Offense picks up the pitching