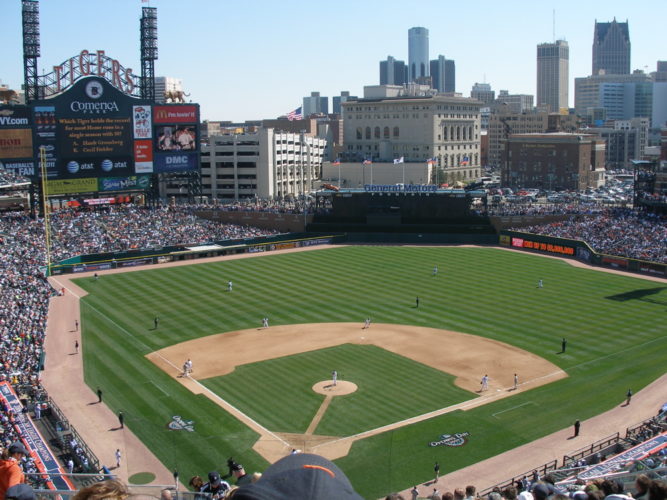 The Dodgers (86-34) aim to secure a series victory over the Tigers (53-68) Saturday afternoon in Detroit. L.A. pulled off a shocking trade Friday night after the conclusion of the series opener, acquiring Curtis Granderson from the New York Mets. The Dodgers are indeed having a grand old time this season, and the front office is as relentless as the team itself.

There was more going on Saturday morning. Joc Pederson‘s locker had been cleaned out.

The Dodgers were quiet on the Joc situation all morning, but he was indeed optioned down to Triple-A Oklahoma City. It’s no secret that Joc has been struggling this year, especially offensively. Joc was hitting .215/.329/.418/.747 with 11 HR, 62K, 33 BB in 87 games and 295 plate appearances.

Dave Roberts on Joc Pederson getting demoted: “It gives him a chance to reset.”

With rosters expanding in September, I don’t think it’s a big deal. Joc could benefit with some time to iron out his swing that has been constantly tinkered with. The front office is not shy when it comes to August demotions. Last year Puig was in Triple-A OKC in August.

It’s been a pleasure watching Hyun-Jin Ryu‘s comeback season with the Dodgers, because he has indeed come back to pitch effectively after shoulder surgery. He’s gone 4-6 with a 3.63 ERA, 4.34 FIP, and he’s striking out nearly one batter per inning (8.8 K/9). The lefty has steadily improved and looked stronger as the season has gone on. He’s 1-0 with a 1.88 ERA in his last four starts going back to the All-Star Break.

Last time out in a win against the Padres, Ryu made a season-high 108 pitches and allowed three runs on seven hits in five innings. The southpaw will have to fend off Justin Upton, who has gone 4-for-10 with a double against Ryu. He has faced the Tigers once in 2014, and it was an epic disaster. Ryu allowed seven runs on 10 hits in 2 1/3 innings. Needless to say, the Dodgers lost that one. Ryu has yet to pitch more than seven innings in a game this year, so the Dodgers will need to have their bullpen ready for multiple innings.

The Tigers send right-hander Michael Fulmer (10-10, 3.78 ERA, 3.54 FIP) to the mound Saturday. Fulmer, 2016 Rookie of the Year, has struggled of late after putting together a solid first half that earned him All-Star honors. In the second half, he’s gone 1-4 with a 6.07 ERA in five starts. He’s never faced the Dodgers. He will face the other reigning Rookie of the Year, Corey Seager.

Let’s talk about the elephant in the room. That lineup. I don’t know where to start. Granderson is in left field, batting fifth. When he joined the Dodgers on Saturday morning in Detroit, he said he would mostly play in left.

Cody Bellinger is in right field with Yasiel Puig on the bench. Justin Turner is the designated hitter, and Adrian Gonzalez starts at first base again. Logan Forsythe is at the hot corner, allowing Chase Utley to play second base. Look, they’re 19 game up in the division. They have plenty of room to experiment.

The Dodgers’ magic number is now 23, and the Giants’ elimination number is down to 3.

Reminder: the game will air on FS1 as well as SNLA tonight.

Stacie Wheeler, born and raised in So Cal, has been writing about the Dodgers since 2010. She wrote daily as the co-editor of Lasorda's Lair for five long years, and she has also written for Dodgers Nation, Dodger Blue 1958 and The Hardball Times. She currently contributes to True Blue LA. Stacie graduated from the University Of Southern California with a bachelor's degree in Cinema-Television. You can also watch her videos on her YouTube channel, DishingUpTheDodgers.
@StacieMWheeler
Previous Dodgers acquire Curtis Granderson from Mets, because that was necessary
Next Dodgers 3, Tigers 0: 6 wins in a row, but all that matters is Cody Bellinger’s ankle