Kenta Maeda could be the Dodgers’ secret weapon 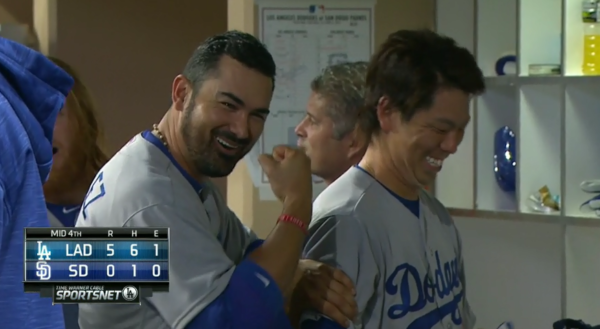 When it was announced that Kenta Maeda was going to be on the postseason roster as a reliever, it was not a surprise. Maeda spent most of the season starting, but transitioned to relief at the end of the year and looked effective doing so. However, the general assumption was that he was going to be the team’s long reliever, and that his purpose would be to eat innings between a short start and the back end of the bullpen in an emergency.

Indeed, Maeda was inserted into his first postseason appearance of the year with one out in the fifth inning of NLDS Game 2, one batter after Rich Hill was removed early for a pinch hitter in a high leverage situation. Maeda struck out A.J. Pollock and induced a groundout by Paul Goldschmidt to end the fifth, then struck out J.D. Martinez to start the sixth. To everyone’s surprise, Maeda was then lifted after just one extremely effective inning in which he mowed down the heart of the Diamondbacks’ order. Why pull a long reliever so early? Dave Roberts‘ answer after the game was a little confusing at the time:

Kenta Maeda “is on this roster to get righties out,” Dave Roberts said.

It takes only a shallow glance at platoon splits to begin to understand the Dodgers’ line of reasoning in determining Maeda’s role. During the 2017 season, 134 pitchers faced 250 right-handed batters (mostly as starters given the high minimum). Here are the highest strikeout rates against right-handed batters among those pitchers:

Did you know Maeda was up there? Maeda and three of the best pitchers in baseball. I certainly did not know that before looking it up. The same holds true when you account for control:

For context, during his 2014 MVP season, Clayton Kershaw had a K%-BB% of 27.8% (combined among both left-handed and right-handed batters). Obviously these numbers do not account for contact quality, but as far as missing bats and controlling the strike zone went, Maeda was about as elite as it got against right-handed batters.

Maeda was not nearly as good against left-handed batters, as Roberts alluded to in his post-game comments. Below is a simple look at pitcher platoon splits. 79 pitchers faced 250 right-handed batters and 250 left-handed batters last season. Below is the highest difference between strikeout rates between the two sides of the plate. A bigger number means a pitcher has a bigger split.

Maeda struck out nearly 1/3 of the right-handed batters he faced during the regular season, but that number was almost halved when a left-handed batter came to the plate. He also had the second-largest platoon split in K%-BB%, again behind Scherzer.

So, Maeda is indeed extremely good at getting right-handed batters out, and was mediocre-ish at getting left-handed batters out as a starter. The change in role makes sense. Additionally, all of the numbers above don’t take into account that Maeda’s stuff appears to be playing up out of the bullpen. In his two innings of work, Maeda has not allowed a baserunner and has struck out four of the six batters he’s faced. His velocity has increased significantly as well. During his two NLDS outings, Maeda threw six fourseam fastballs. Those six pitches averaged almost exactly 95 mph. During the regular season, Maeda’s fourseam averaged 92.3 mph. Those extra ticks of velocity have allowed him to do this:

That second GIF, his Game 3 appearance-ending strikeout against Chris Iannetta, wasn’t even in a great spot. He missed across the zone. It’s stuff Maeda can get away with when he’s sitting 95 that he couldn’t necessarily do when he was sitting 92.

Not only has Maeda gained velocity, but he is using his pitches differently in short appearances:

Part of this is platoon usage, since Maeda has thrown 19 of his 21 pitches to right-handed batters (the left-handed Daniel Descalso saw a pair of two-seamers in Game 3). It’s obviously a small sample as well, and Maeda favored the slider/cutter combo to right-handed batters for most of the season. Still, he didn’t throw them this often, and the increased use has come at the expense of his two worst pitches: the curve and the change. He’s throwing more of his good pitches and fewer of his bad pitches. It’s an easy recipe. The results have spoken for themselves:

Maeda’s move to the bullpen has turned one of his biggest weaknesses into a strength. His platoon use can be controlled and he can get high-leverage outs, like he did during two of the three NLDS games. This can be countered by opposing managers to some extent, but it’s not like Torey Lovullo was going to pinch-hit for Goldschmidt or Martinez when Maeda faced them in Game 2. Additionally, Maeda’s fastball velocity has become above-average, and his good command (mostly) seems to have come along for the ride. It’s hard to draw a meaningful conclusion from only two innings of work, but it certainly seems like some good ingredients could be in place.

The full package of Kenta Maeda, high-leverage ROOGY is a very enticing one for the Dodgers, and Roberts has already shown that he is willing to take advantage of it in the appropriate spots. Maeda’s presence can also keep Morrow and Jansen from getting worn down too quickly, like Joe Blanton was last year. Perhaps Maeda’s full package out of the bullpen is still flawed, but the cat’s still out of the bag: the Dodgers have yet another weapon at their disposal. Whether or not it will continue to work remains the biggest question.

Daniel Brim grew up in the Los Angeles area but doesn't live there anymore. He still watches the Dodgers and writes about them sometimes.
@danielbrim
Previous Podcast: ‘Dugout Blues’ NLDS Game 3 recap
Next Some of the Dodgers’ 9 arbitration-eligible players due big raises