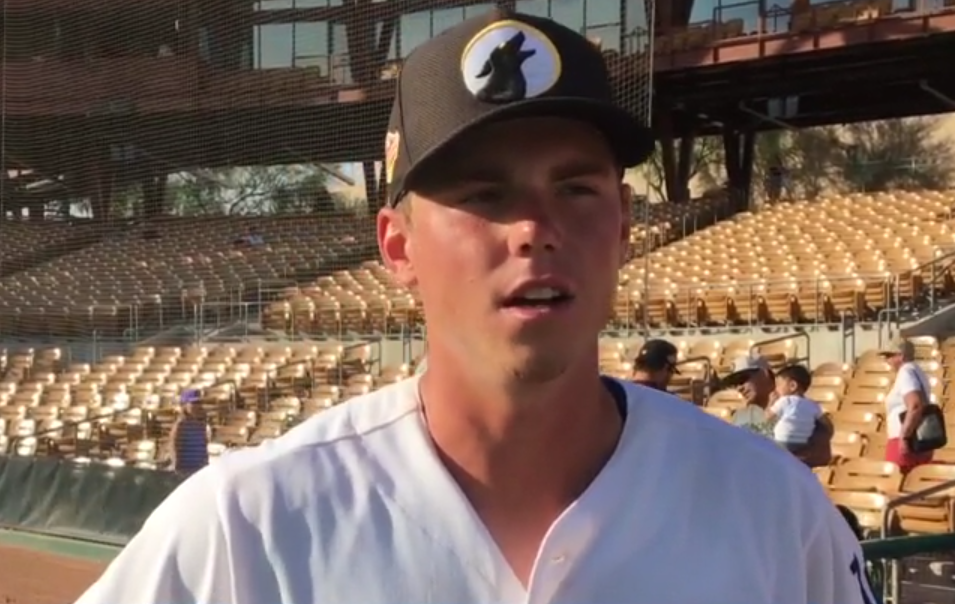 The Arizona Fall League has come to an end for the eight prospects the Dodgers sent to the Glendale Desert Dogs, and while some stood out more than others, they all had quite decent showings.

The AFL was more important for Smith than most because of the time he missed in 2017 after he broke his hand. Well he played like it meant something, going 23-for-62, including seven extra-base hits and 10 walks against 18 strikeouts, which was good for a 1.017 OPS.

Smith himself said making up for the lost playing time was important.

“For me it was about getting those lost at-bats that I missed during the season. Getting those swings in and then being able to get more games in behind the plate,” Smith said. “Really just getting more experience playing against some of the best guys in the Minors.”

Well that he did, as Smith was the clear standout for the Dodgers as his prospect status continues to rise. If he didn’t get hurt he would’ve spent considerable time in AA last year, so it figures he’ll start there next year, especially after this showing.

The strengths and weaknesses of Peters were magnified in the AFL. While he went just 8-for-42 and struck out 20 times to just four walks, Peters also showed scouts that his power was legit and that he had legitimate athleticism.

Peters has confirmed in the Fall League that the power he showed in the California League, a circuit which he paced with 27 home runs, is legit and will play anywhere. In my two-game look at the outfielder last week, he blasted an impressive home run to right-center field and then followed it with a mammoth blast down the left-field line in his subsequent start. The latter homer had an exit velocity of 116 mph and traveled over 450 feet. What’s more, his athleticism and speed gives him a chance to play all three outfield positions, with arm strength that’s a natural fit in either center or left field.

When he connects … yeesh.

But yeah, the pros and cons were on display, and he realizes there are adjustments to come. AA should be a big test, and he’ll probably start there next year.

Diaz made the Fall Stars Game as he was generally impressive in the AFL, going 20-for-66 with four extra-base hits and six walks against nine strikeouts. Diaz certainly wasn’t overmatched in the league, which should bode well going forward as he heads for a full season in AA next year.

Already 25 next year, Beaty could’ve used a strong AFL, but he collected just 16 hits in 66 at-bats, striking out 10 times with just two walks. He did slug, however, compiling six doubles and two homers to salvage his slash line a bit. Beaty should be heading to AAA to see if he can hit his way into the conversation as a legitimate depth option for the Dodgers.

Sopko made six starts in the AFL, though he went just 19 innings. He struck out 11 and walked seven, but he was effective, putting up a 2.37 ERA. It seems likely that Sopko will be sent back to AA to start the year.

Anderson appeared in relief nine times in the AFL, pitching 12.1 innings. While he struck out 12 and walked five, Anderson also allowed 14 hits, so he might’ve been a bit fortunate. Still, it was much better than his 2017, and he should get another crack at AA.

Boyle appeared in 10 games in relief, pitching 13 innings in the AFL. He struck out 11 batters to just three walks, and he may have earned himself a promotion to AA to start 2018.

Spitzbarth had by far the worst ERA of all the Dodgers pitchers in the AFL, but he may have arguably looked the best. He made 10 appearances and threw 11 innings, striking out a whopping 19 batters and walking just two. However, five of the six earned runs he allowed came in two poor outings, which led to his mediocre ERA. Spitzbarth will probably be going back to AA to start 2018, but the Dodgers could push him to AAA if they want.