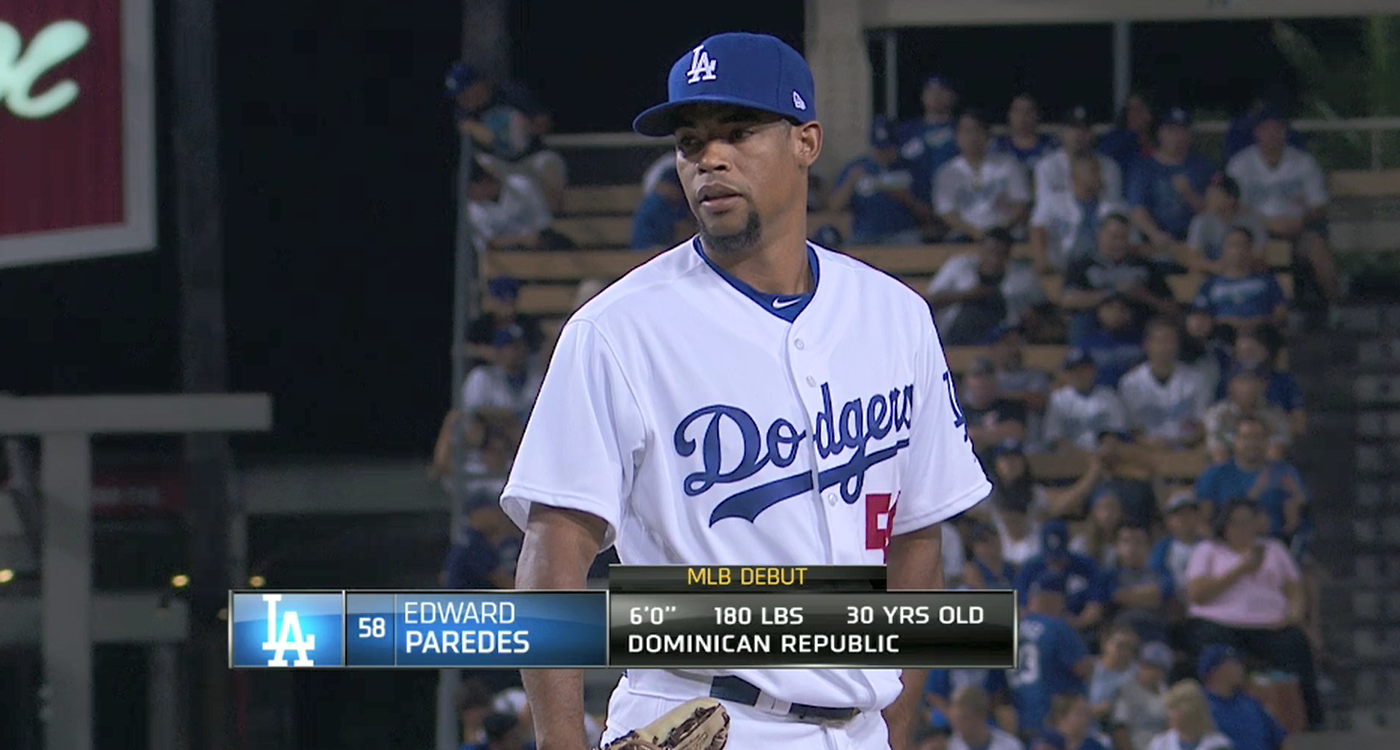 What Happened In 2017: Finally made his major league debut after nine minor league seasons and pitched in 10 games for the Dodgers out of the bullpen with surprisingly good results.

The Dodgers selected left-handed pitcher Edward Paredes from the Detroit Tigers in the 2016 Rule 5 Draft for the minors. He spent most of the season with Double-A Tulsa and Triple-A Oklahoma City, where he dominated. The 31-year old from the Dominican Republic struck out 66 batters in 41 2/3 innings (35.3 K%) in the minors with a 2.25 ERA in 35 games before he was called up in July.

Paredes picked up his first major league win in his MLB debut on July 24, a perfect eighth inning against the Twins.

Paredes was optioned back down to Triple-A after the Dodgers traded for fellow southpaw Tony Watson. He wasn’t gone for long. Paredes was recalled in late August from OKC to temporarily replace the injured Yu Darvish (back) on the roster.

The elder rookie didn’t allow a run through his first eight relief appearances. He had one noted bad outing against the Rockies on September 7 when he allowed three earned runs on four hits and wasn’t able to record an out. Otherwise, he provided some solid relief innings when called upon.

After the Dodgers acquired Paredes, they told him to use his slider more. He threw it 63.3% of the time when he was with the Dodgers. It worked.

“This was the strategy the Dodgers laid out for Paredes not long after selecting him in last December’s minor league Rule 5 draft. He’d been throwing his fastball and slider about evenly over the course of 11 minor-league seasons. The Dodgers, he said, wanted to see his slider about 60 percent of the time. Paredes threw it 68 percent of the time and didn’t allow a run in his first eight appearances through Wednesday.”

Eric Stephen of True Blue LA pointed out that Paredes struck out the most batters (11) in a season by a Dodger pitcher with no walks.

Edward Paredes had 11 strikeouts in 2017, the most in a season by a Dodgers pitcher with no walks https://t.co/3UYoHgofrb

Paredes wasn’t used at all in the postseason by the Dodgers, who went with Kenta Maeda for the final roster spot instead.

Paredes pitched 9 2/3 innings in the Dominican Winter League with Leones del Escogido and did not allow a hit to opposing batters, striking out 16 and walking one in 11 games.

A pleasant surprise with potential, Paredes is No. 41 on Dustin’s Top 100 Prospects list for 2018.

2018 Status: Has one option year remaining. Will battle for a spot in the Dodgers’ bullpen out in Spring Training and will likely see time with the big club at some point even if he starts the season with OKC.

Stacie Wheeler, born and raised in So Cal, has been writing about the Dodgers since 2010. She wrote daily as the co-editor of Lasorda's Lair for five long years, and she has also written for Dodgers Nation, Dodger Blue 1958 and The Hardball Times. She currently contributes to True Blue LA. Stacie graduated from the University Of Southern California with a bachelor's degree in Cinema-Television. You can also watch her videos on her YouTube channel, DishingUpTheDodgers.
@StacieMWheeler
Previous Podcast: ‘Dugout Blues’ episode 224 – Darvish signs with Cubs, NRIs, Top 100s
Next Dodgers to re-sign Chase Utley, obviously