What Happened In 2017: Was almost inarguably the best reliever in baseball.

Over the previous offseason, Kenley Jansen signed a five-year, $80 million contract with the Dodgers (evidently inspired by some very fateful events at his own wedding). In 2017, he showed that he was very much worth the money, posting yet another dominant season.

Jansen continued to do that thing where he strikes out a ton of guys, crossing the 100 K mark for the second year in a row and the fourth time in his career. He also somehow managed to lower his already microscopic walk rate, which dropped from 4.4 percent in 2016 to 2.7 percent in 2017. Remarkably, Jansen struck out 51 batters before allowing his first walk of the season, which didn’t come until June 25. He ended 2017 with only seven walks allowed, versus 109 strikeouts, good for a whopping 15.57 K/BB ratio.

For the second consecutive season, Jansen was selected to represent the National League in the All-Star Game. He pitched the ninth inning of a tie game, and worked around a leadoff single (and a stolen base) (and a balk) by striking out the side.

Jansen was consistently excellent throughout the 2017 season, anchoring one of the best bullpens in baseball. As is the nature of closers, he was often the one on the hill in some of the Dodgers’ biggest moments, including when they clinched the division on Sept. 22. After Jansen closed out that key victory against the Giants, manager Dave Roberts said, “California Love is my favorite song.”

That is a highly relatable sentiment for Dodger fans. The harbinger of Jansen’s entry provides a feeling of security, something that is so rare when it comes to pitchers, especially relievers.

In the postseason, Jansen was used heavily, appearing in all but two of the Dodgers’ 15 games. In 16 2/3 innings pitched, Jansen allowed four runs (three earned) on eight hits and three walks while striking out 20. In five of his appearances, he recorded four or more outs.

In what may have been the biggest moment of his professional life to that point, Jansen got the final out of the NL Championship Series to send the Dodgers to that long-awaited World Series.

There were some far less celebratory moments in the World Series, although there were plenty of highlights for Jansen, too, including a crucial two-inning save in Game 6 that forced the deciding Game 7.

Jansen’s 2017 efforts were recognized with the Trevor Hoffman NL Reliever Of The Year Award; it’s the second season in a row that he’s received the honor. Additionally, in a season where not many NL starters stood out, Jansen placed fifth in NL Cy Young voting — and 15th in NL MVP voting.

2018 Status: Entering the second year of his five-year contract, firmly entrenched as the Dodgers’ closer.

While Kenley may hate the proposed pace of play rules, they seem inevitable at this point, so here’s Kenley’s bullpen cart on a shirt. 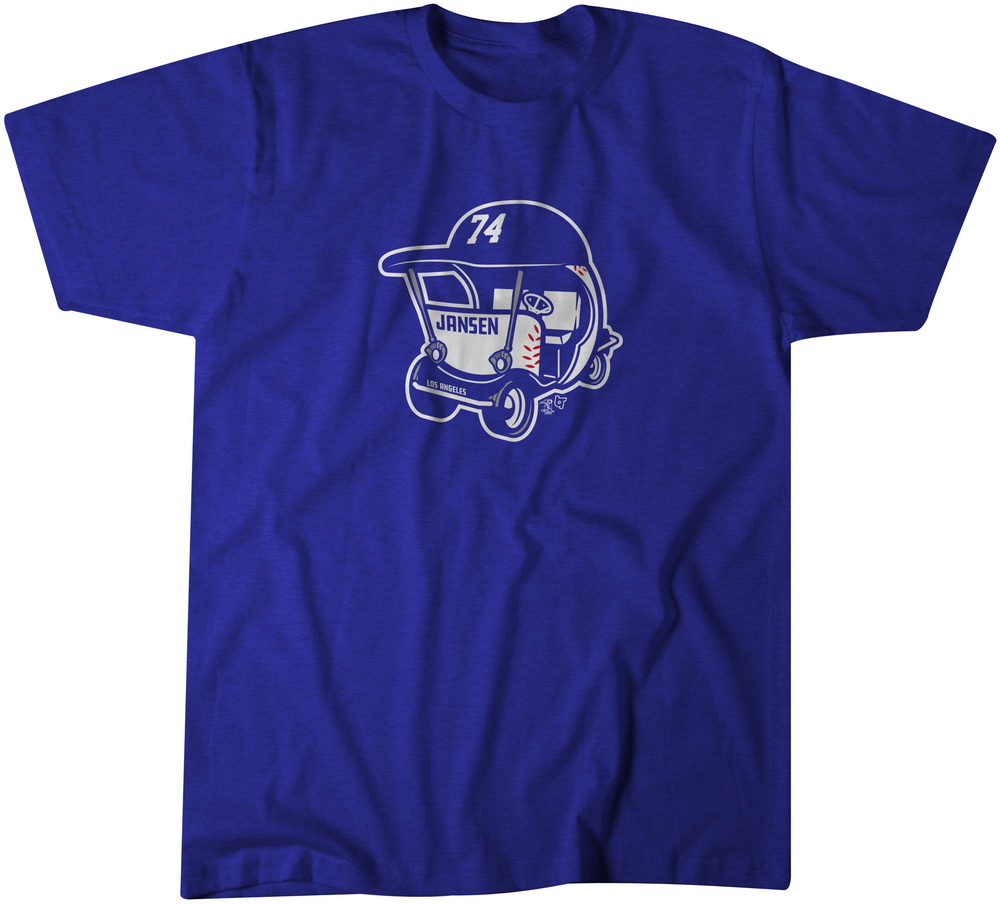 Get one because it’s awesome and it also supports Dodgers Digest.

Sarah Wexler is a native Angeleno and longtime Dodger fan. She began blogging about baseball in 2012 on her Tumblr, New Grass On The Field, where she covered an array of topics but especially enjoyed exploring baseball history. She is now a reporter/producer for MLB.com. She earned her master's degree in Sports Management from Cal State Long Beach. She graduated from New York University in 2014 with a bachelor's in History and a minor in American Studies. She's an avid Springsteen fan, which is a big boost to her baseball writer cred.
@sarahwexler32
Previous Corey Seager, Cody Bellinger, Matt Kemp, Dave Roberts try to say ‘Happy New Year’ in Korean … fail
Next 2017 Dodgers In Review: OF Yasiel Puig