Matt Kemp may crack the Opening Day roster, but can he contribute?

If you told me after the season ended that I’d be writing about a new Dodgers left fielder, I would’ve believed that. I could see Marcell Ozuna starting in left, or moving Chris Taylor to left field, with the addition of Christian Yelich in center.Maybe Giancarlo Stanton switched corners because the Dodgers preferred Yasiel Puig’s defense in right? Maybe the whole outfield was shaken up by moving Puig for Jackie Bradley Jr.? I could’ve expected and understood any of those. If you asked me the least likely outfielder in the league to be in the mix for the left field playing time on Opening Day, I would’ve said Matt Kemp.

What has he been up to anyway?

We’re all familiar with Kemp and his history with the Dodgers. He was drafted by LA in the 6th round of the 2003 MLB Draft, and spent 9 MLB seasons with the team from the 2006-14 seasons. Following the 2014 season, he was traded to the Padres in a deal that netted the Dodgers Yasmani Grandal. In the three preceding years, he has spent a year and a half with the Padres and a year and a half with the Braves, the whole time $3.5 million of his annual salary was being covered by the Dodgers.

A few potentially related issues have plagued him and his tenures with both squads. During his tenure in San Diego, he had issues with his conditioning and his defense almost the entire time. This led to his eventual trade to the Braves where the same reputation followed, along with the drama that had pursued Kemp since 2014 with the Dodgers.

Former GM of the Atlanta Braves, John Coppolella, said back in August of 2016 that, “A big part of why he isn’t good in left is because he’s out of shape. … If he gets in shape he’ll be much better there.”

So, what’s the deal with him?

Initially the idea was plain and simple — it was a salary-related trade and the salaries matched well. It just so happened that the salary that best matched the Dodgers plans was that of Kemp. Some thought he would be traded within 24-48 hours, but it’s been almost three months now, and we’re four weeks from Opening Day as this is published. Kemp actually seems more likely than not to be on the Dodgers when that day comes.

A significant reason for that is Matt Kemp is set to make $21.5 million. A guy like J.D. Martinez became a free agent in the beginning of November and just finally worked things out with Boston on Feb. 26 to the tune of a five-year, $110 million deal or $22 million a year. They were linked from the start and yet a competitive market for Martinez never materialized. Since 2014, Martinez has ranked 5th in both wOBA at .382 and wRC+ at 148. He’s a top notch hitter, as elite as they come, hitting the open market. Whatever it may be that held the market up how it did, nobody wanted to pay a top five hitter in baseball more than an AAV of $22M.

That just happens to be around the same amount of money that Kemp is making, so the market conspired to make trading Kemp much more difficult than first anticipated. It simply wasn’t going to happen without moving premium prospects with him, or only getting minimal relief. Teams don’t want to roll the dice on Kemp anymore. He hasn’t played to a replacement level since his last season with the Dodgers in 2014. Unless the prospects attached to Kemp in a trade are significant, it just doesn’t make much sense for a buyer. Thus, as things stand now, his best chance for success may be with his original team.

So then what are we getting with 2018 Matt Kemp?

As a player the last few years, Kemp is a league-average bat with bottom of the pack defense. Attribute the defense to motivation, fitness, conditioning, or whatever you will, but it’s widely agreed upon that he hasn’t been good out there in a long time.

Still, offensively there’s some promise. He’s had a 107 wRC+ overall since 2015, which means he’s mean 7% better than the average hitter over that time span. This slots him ahead of guys like Ryan Zimmerman and Hunter Pence (both 106 wRC+) and just behind guys like newly signed Logan Morrison (109), Jackie Bradley Jr. (109), Ian Kinsler (109), and Steven Souza Jr. (107). So despite the last few years of drama and extra weight, he’s still been pretty decent at the plate. 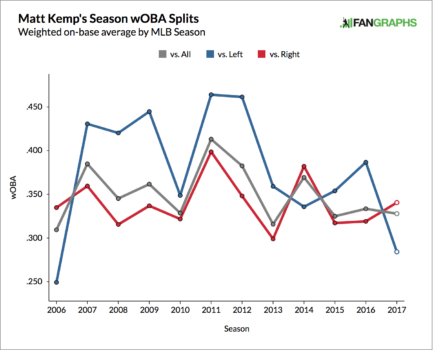 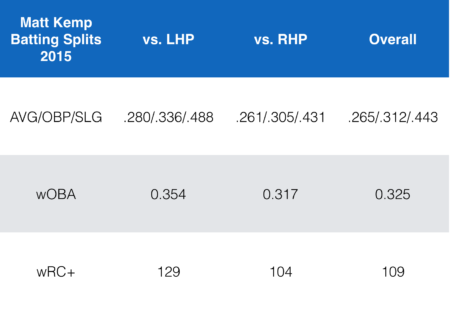 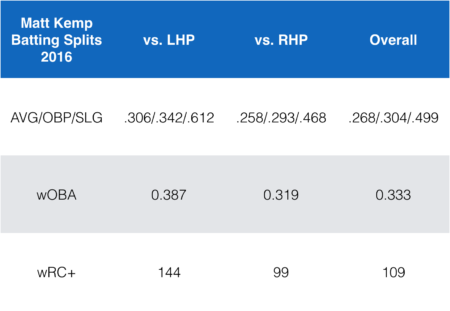 As you can see in the graph, Kemp has been a better hitter against lefties his entire career in all but two seasons (2014 & 2017). 2017 was the most recent outlier year where Kemp had reverse splits, but that can sometimes be caused by small sample sizes. He did battle injuries in his final season with Atlanta, and had only 110 PA against LHPs in 2017, which is a relatively minimal sample size.

Assuming he does, there is a likely platoon bat there at the very least. Not everyone will remember due to an injury-plagued season, but the Dodgers signed Franklin Gutiérrez a year ago to be a lefty killer, it sure seems like if Kemp can even regain a bit of his old skill, there’s a role for him on this team. How the Dodgers plan to manage that remains to be seen, but there is likely still value to be had from Matt Kemp’s bat.

Defensively, everyone kind of knows the drill. By Ultimate Zone Rating (UZR) and Defensive Runs Saved (DRS) — since leaving the Dodgers Kemp has been the worst outfield defender in baseball. He is dead last in UZR at -40.5 with Andrew McCutchen being the 2nd worst at -27.8, which is a huge gap. He is also tied for last with -50 DRS over that time period — meaning exactly what you think. By all accounts, he hasn’t fared any better with the eye test either.

In theory, Kemp could benefit by taking left field behind a staff that produced less line drives and fly balls than most. Less opportunities to make mistakes will mean less mistakes, or that’s the theory at least. Last year, the Dodgers staff allowed the 6th-highest rate of line drives (LD%) and the 12th-highest rate of fly balls (FB%), and it would make sense if he were to slot in behind pitchers like Alex Wood (52.4 GB%) and Clayton Kershaw (47.9 GB%) instead of pitchers like Rich Hill (36.9 GB%) and Kenta Maeda (37.5 GB%).

Hopefully, the Dodgers also see something the Braves didn’t with his positioning and shifting. Per Ken Gurnick, “The Dodgers feel they can help Kemp with analytics-driven positioning. He met with outfield coach George Lombard on Friday and expects to use positioning cards for reminders when the season starts.”

At the very least, Kemp is happy to start fresh and is in good shape. One could say the best shape of his life. From what’s been said, he’s down close to 40 pounds and he looks the part as well. Gone is the Kemp of 2013-14 complaining about not playing center field, as recent struggles have just made him happy to be back and looking forward to contributing in 2018. He now looks the part again, so let’s hope he can act the part too.

It’s all a relative game of catch-up with Kemp. You hope to optimize his above-average bat with matchups, and most likely minimize his defensive liabilities with matchups as well. The Dodgers feel they can get better defense out of him, Kemp has cut the weight down, and his offensive production could improve with selective usage as well.

Minimizing Kemp as a defensive liability and maximizing his offensive ability will take hard work from both the Dodgers number crunchers and field staff, but given their previous success with implementation, I feel as confident in their ability to execute this plan as I would any other.

That plan is why Kemp’s best chance for success is likely with his original team, and a solid bounce-back year from him would really would be a great story.

Just a guy living in Southern California, having a good time writing about baseball. Hated baseball practice as a kid, but writing about it rules. Thanks for reading!
@AllanYamashige
Previous How the Dodgers could extend Clayton Kershaw without going over the luxury tax
Next 2018 Dodgers Top 100 Prospects: No. 30-21