Walker Buehler is adding to his arsenal

Saturday night, Dodgers’ top prospect Walker Buehler made his Cactus League Debut against the Chicago Cubs. He was as electric as you could hope, striking out five in two innings of work. He sat 97-99 MPH with his fastball, but also flashed a few pitches we didn’t see much of in his major league stint last year.

The first two strikeouts of his appearance seemed to be on two-seam fastballs with solid left-to-right movement, as opposed to his straight rising four-seamer. Both of these strikeouts were looking, as they were placed perfectly just tailing over the edge of the plate.

His next two strikeouts were on perfectly placed curves at the very bottom of the zone. They were almost identical pitches to each other. The first causing a whiff, the second curve fooling the batter who was likely expecting a 99 MPH fastball.

His final strikeout of the night was likely the most important moving forward.

In the last at-bat of his outing, on an 0-2 count to a left-handed hitter, Buehler threw a pitch that to me, and I’m sure to the hitter as well, looked like a fastball out of the hand. When it’s coming in at almost 100 MPH, you have to commit early. However, the hitter swung over the top of a pitch that was just low of the zone and finished right at the dirt. Looks like a fastball out of the hand, but has definite sink and arm-side run? Sounds like a changeup to me.

Changeups are primarily used to minimize platoon splits, essentially getting an opposite handed hitter out. This changeup development would be very important for Buehler, as it would expand his arsenal even further, making him a more complete pitcher. Last year, in his MLB stint, he was primarily a two-pitch pitcher. His pitch usage was 70% fastballs, 23% curves, and 7% sliders. In total, he combined for 93% fastballs and curves. In 2017, of pitchers who threw at least 140 innings, none were as limited to two pitches as Buehler. Granted, Buehler only threw nine innings, but if we project for a full season he would need to mix in more pitches. Also, only four pitchers threw a fastball more often than Buehler, Bartolo Colon, Lance Lynn, Trevor Williams and J.A. Happ. Happ and Williams both have two other pitches they throw more than 10% of the time, so while extremely fastball-heavy, they each have two other offspeeds. Buehler also ranked first in fastball + curve usage with only 13 other guys throwing those two pitches more than 80% of the time. This appears to be a guy who drastically needs a reliable third pitch. Of course, if you view Buehler as a relief pitcher over this stretch (he was), he would rank 31st in fastball usage and 14th in FB+CB usage. Essentially, his pitch mix resembled a fastball/curve reliever more than a starter due to the lack of using a third pitch. That was likely be design due to his role, but it did show exactly what he and the Dodgers felt comfortable with using against MLB hitters.

Taking a quick look at Buehler’s arsenal, he has four pitches despite primarily throwing only two of them in the MLB last season. Of note is that his changeup won’t be listed below as he didn’t throw it once in the MLB last year. 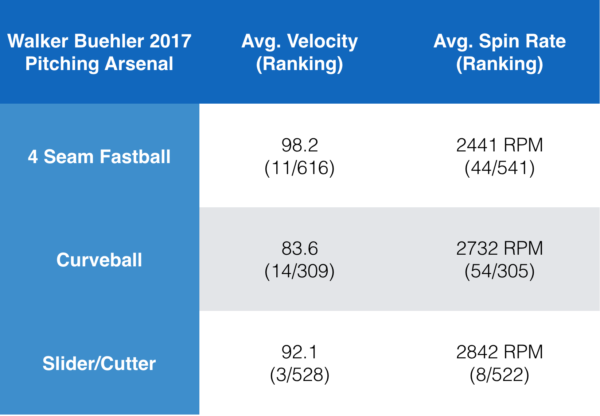 Four-seam fastball: His four-seamer is deadly, featuring incredible velocity and spin rate. Last year, he would’ve been tied with Noah Syndergaard among starters for the highest average fastball velocity in the league. It also would’ve ranked 15th in spin rate among starters.

Curveball: The curveball is also already a top of the line pitch. It would rank fifth in velocity behind Syndergaard (84.4), and ahead of guys like Stephen Strasburg (82.5), Robbie Ray (81.8), and Justin Verlander (80.4). Among starters, the spin rate would be 32nd, barely behind guys like Strasburg and Verlander, and his curve would be tied for 60th of more than 400 in total curveball drop at -7.5 inches, which is very impressive considering its velocity. Velocity on the curve typically leads to whiffs, whereas drop on the curve usually induces more ground balls. Buehler’s curve has both. This pitch is likely to cause a lot of whiffs in the coming season, and one could expect this to be a go to for Buehler. He has two top notch pitches already, it’s no wonder why he threw them so frequently.

Slider: The slider also has elite velocity and spin rate, but had only three inches of drop and three inches of right to left movement. Combine that with only a 6 MPH drop off from his fastball, and you have a pitch moving more like a cutter. It can be useful, but for a slider, it’s rather ineffective. For example, Clayton Kershaw‘s slider last year averaged roughly six inches of drop and two and a half inches of left to right movement. The good news on this pitch though for Buehler is that it’s been recognized that it needs to move more, and Buehler has been tinkering with it. He recently said to the LA Times, “The harder you throw it, the less it’s going to break … Really, it’s the same pitch. Just trying to throttle it down a little bit and make it a little bit bigger.”

Changeup: The changeup is supposed to be a decent fourth offering for him, but he hardly used it last year. It would benefit him to use it more, especially against opposite handedness batters, and grow more consistent with it. If it’s anything like it was in that video, it’s really something.

Buehler threw a total of 98 innings in his first full year back from Tommy John surgery.

While nine innings is too small a sample for almost anything, it’s notable in that it wasn’t all bad despite the numbers.

The MLB average HR%/FB% last year was at an all time high of 13.7%. Buehler only gave up two home runs, but his HR/FB% was at 50%. You could say that’s due for a regression over a full season. Also, the MLB average batting average on balls in play (BABIP) last year was .297 and Buehler was hit for a .409 BABIP. In an even smaller, and extreme sample size RHBs had a .462 BABIP against him.

This is an extrapolated way to say that he wasn’t great in his debut, but he was very unlucky and there were promising signs. Buehler dealt with some command issues that were likely tied to the now well-documented relief game plan of throwing high in the zone, and when he missed in that area he was hit extremely hard. Still, showing two elite pitches in his four-seam fastball and curve, as well as having a two-seamer, cutter, and change that flash above average, definitely gives fans a glimpse of what the hype is about.

All in all, the changeup and two-seamers we saw Saturday were very promising because Buehler already has elite stuff, and now it appears he’s just continuing to add to his arsenal.

Just a guy living in Southern California, having a good time writing about baseball. Hated baseball practice as a kid, but writing about it rules. Thanks for reading!
@AllanYamashige
Previous Dodgers announce 7 more cuts, including Buehler, 11 moves remain to be made
Next 2018 Dodgers Top 100 Prospects: No. 20-11