I hate writing about trends this early in the season. The Dodgers have played eight baseball games. Only one of their starting pitchers has gone more than twice, several have only gone once. Every statistical point in early April needs to be qualified and caveated, and most don’t last. Still, we need stuff to talk about that isn’t Kenley Jansen‘s velocity or the Dodger offense being terrible, so here is an early season statistical point: The Dodgers are throwing fewer fastballs as a team, at least so far.

There are several pitchers who can be talked about in great length with more sample size. In his three starts, Clayton Kershaw has thrown more sliders than fastballs, continuing a trend of shifting away from the fastball for years: 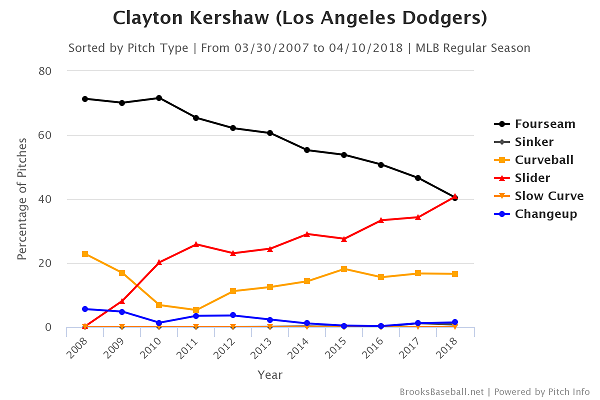 JT Chargois has thrown 17 fastballs and 31 offspeed pitches this year. Strangely, Rich Hill has been exempt to this shift, having thrown 103 fastballs and 55 curves rather than his normal 50/50 split. However, when viewed as a whole, things are changing so far. Below is a graph showing how often Dodger pitchers have thrown a combination of fourseam fastballs, twoseam fastballs, and cutters in every year since 2011: 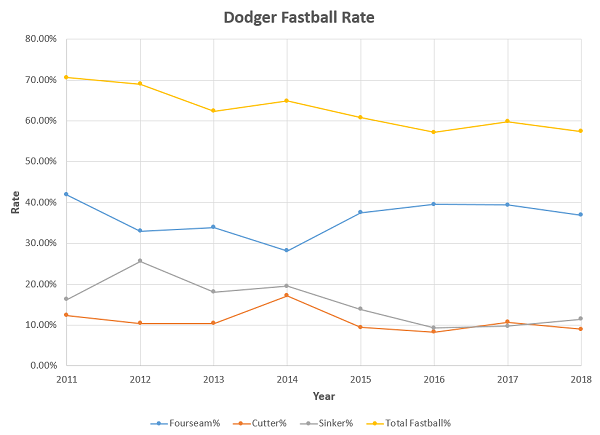 You will notice an overall trend, one which has continued this year. So far the 2018 fastball rate is not lower than 2016, but the team’s fastball rate is 6th-lowest in baseball in this young season. The biggest change so far is the decline in fourseam fastball rate, from 39.4% to 36.9%. There has also been an increase in twoseam rate and a decrease in cutter rate, likely owing to Kenley Jansen only throwing three times this year. It’s also worth noting that something strange happened in 2014 which might be interesting to study in hindsight.

There has been a lot of talk about how the league is going to throw fewer fastballs as bullpen arms become more interchangeable and starters turn over the lineup fewer times (a fundamentally anti-labor position, but we’ll save my rant on that for another time). However, the league-wide rate has not budged much so far this year. In 2017, pitchers threw fastballs 61% of the time. In 2018, they’ve thrown fastballs 60.7% of the time. The lack of change might be a “pitchers are still warming up in April” thing, but so far the Dodgers have moved more than the league and are well below league-average again this season.

Unfortunately it’s too early to figure out why this is happening. Some of that might just be a disproportionate number of innings in weird places. Kershaw has started three times while several Dodgers have only started once. Three extra-inning games so early in the season moves stuff a lot as well, since the bullpen has pitched a disproportionate number of innings. Perhaps the Dodgers were throwing fewer fastballs to the Giants (5/8 games so far) as a scouting report. There are too many caveats to list.