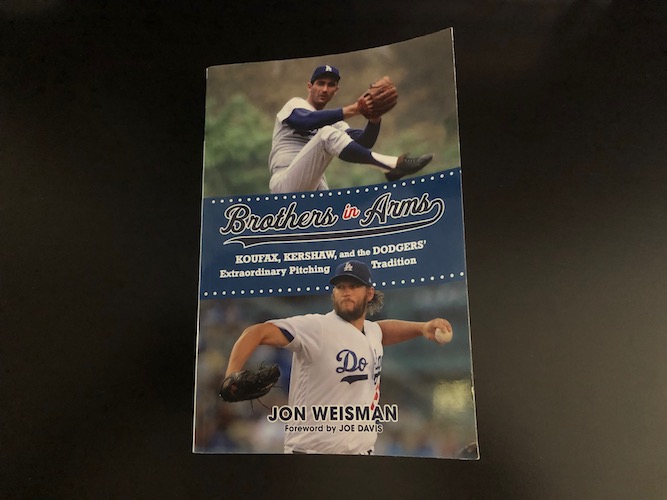 We all can agree that the Dodgers have a pitching tradition like no other. Since the 1850s, the Dodgers have been at the forefront of pitching dominance in baseball. There have been some hiccups (shout out 2010 Opening Day starter Vicente Padilla), but there has been no more iconic duo in baseball than the Los Angeles Dodgers and pitching.

In Brothers in Arms, author Jon Weisman walks the reader through more than 150 years of Dodger history. Following some explanation about statistics and sourcing, Weisman starts with The Ancestors and takes you from Brooklyn to Los Angeles, highlighting some of the best pitchers in Dodger (and baseball) history. He starts with Jim Creighton, a former Brooklyn Excelsior pitcher that dominated for three years before rupturing a hernia on a home run swing and dying four days later. As he should, Weisman ends the book with Clayton Kershaw, who entered the 2018 season with the third-highest WAR among pitchers in Dodger history. Only Dazzy Vance and Don Drysdale have WARs higher than Kershaw’s 57.4 entering the season. Drysdale’s 61.3 WAR came in 3,432 innings while Vance’s 61.8 WAR came in 2,757 2/3 innings. Kershaw sits just more than 4.0 WAR behind both of them, at only 1,935 innings.

We’re currently watching the greatest pitcher in the history of the franchise with arguably the greatest pitching tradition in the sport. This book reminds you of that, but also reminds the reader of so much more.

Weisman obviously talks about the basic statistics in the book. There’s many mentions of ERA, WHIP, strikeouts and wins. However, Weisman wisely includes WAR and FIP, and includes ERA+, which adjusts ERA for ballpark and the era of the season. This allows you to see how Kershaw’s 197 ERA+ in his 2014 MVP campaign stacks against Dean Chance‘s 200 ERA+ in 1964, as Chance beat out Sandy Koufax for the Cy Young Award.

The book is also an eye-opening look at how baseball has changed over the years. In 2017, 15 pitchers threw over 200 innings. From 1963-66, Koufax threw more than 300 innings three times. Of course, 1966 was Koufax’s final major league season as he retired due to arm issues, but it’s mind-blowing to read about these pitchers consistently throwing over 200 innings. Even more recently, Ramon Martinez threw back-to-back seasons with over 220 innings at 22/23 years of age. Baseball’s name-game has also gotten much weaker in recent years. Weisman introduced me to former Dodger pitchers Nap Rucker and Van Lingle Mungo, who sound like name’s from Key & Peele’s East/West Bowl skit.

Sidebar: Quisperny G’Dunzoid Sr. won an Oscar. What a time to be alive.

Weisman spends a few pages talking about each pitcher. In his “Bullpen Aces” chapter, Weisman rattles off highlights and stats of 19 different pitchers in only 28 pages. Koufax and Drysdale split a 44-page chapter entitled “The Two Emperors”. Kershaw gets his own 28-page chapter, “The Magnificent”.

In fewer than 30 pages, Weisman manages to take the reader through the ups and downs of each player’s career. From their pre-playing career to how they ended up in Brooklyn or Los Angeles and through their Dodger career. Weisman also looks at their careers after leaving the Dodgers (when applicable), and in many cases their post-baseball lives up to their deaths.

Weisman runs through each players stats and quickly goes over most of their individual seasons, highlighting standout games. Any of us could access most of this info on a slow Saturday just running through Baseball Reference for a few hours, but the best part about the book is the stories that Weisman tells about each players. He conducted more than 25 interviews with various writers, players and other organization members for some stories. For others, Weisman pulls quotes from books, periodicals, websites and video recordings to bring the reader in. Half the time, I felt myself reading these stories in Vin Scully‘s voice, which is pretty much the highest compliment I can give to a storyteller.

I like to think I’m pretty knowledgeable about the Dodgers and their pitching history, but even I learned a ton from this book. I learned about how close the Dodgers came to trading some of the best players in franchise history. I learned how easily this book could have been about the pitching tradition of the Pittsburgh Pirates, who came close to signing both Koufax and Drysdale. I also learned that the Dodgers could have traded for Randy Johnson, so at times this book can also be infuriating.

I was also reminded of just how good some players from my childhood were. I always knew the name Ismael Valdez, and I’m fairly certain he started the first Dodger game I ever went to. However, I did not realize that his 115 ERA+ is the sixth-highest among Los Angeles Dodger pitchers with at least 1,000 innings, trailing only Kershaw, Koufax, Tommy John, Drysdale and Orel Hershiser. Weisman brings the names we all vaguely remember and puts them in context as part of an incredibly rich pitching tradition.

History books, sports related or not, tend to bore me. However, Weisman does an excellent job of also providing humor. I don’t want to spoil anything, but the intro to the Jonathan Broxton segment legitimately made me choke on tea while reading. There’s a number of stories that break up the at-times dense statistics, and they provide the reader with context about the human side of these players.

In all, Brothers in Arms should be required reading for Dodger fans. It’s broken up in an extremely easy-to-read way despite its nearly 400 pages, and you’d be hard-pressed to find someone that won’t learn a thing or two from this book.

Brothers in Arms is available to preorder from Triumph Books, Amazon and Barnes & Nobel. The book comes out on May 1, and Weisman will be holding book signings. Two have been scheduled so far, the first on May 5 at Central Library and the second on June 3 at Common Space Brewery.

I've been writing about the Dodgers since I graduated from Long Beach State, where I covered the Dirtbags in my senior year. I'm either very good or very bad at puns.
@@ac3581
Previous Marlins 8, Dodgers 6: Clayton Kershaw struggles, offensive rally is too little and too late
Next The State of Things