The Dodgers (11-12) take on the Giants (11-13) for the seventh time this year. The series is 3-3 so far, but the Dodgers have outscored the Giants 21-10. Both starters will be tossing their fifth games of the season, as Dodgers ace Hyun-Jin Ryu faces off against Derek Holland. Ryu looks to continue his dominant start to the season, and the Dodgers look to get back on track. The Giants are coming off of two strong series wins against the Angels and the Nationals. Meanwhile, the Dodgers are coming off a disappointing series loss to the Marlins, where we won’t discuss what happened with a certain starting pitcher in the final game of that series. It didn’t happen.

This is the second game of the year with all three catchers starting, and their only win against the Marlins came with that lineup. Corey Seager sits tonight on his 24th birthday, as he tweaked his hip in the ninth inning Wednesday night. This looks precautionary more than anything as the team has a long stretch of consecutive games coming up, and Enrique Hernandez has been swinging a hot bat regardless.

Seager dealing with hip flexor. Could be available in some capacity tonight. Should be in lineup tomorrow. He’s not being ruled out for both games of DH, tomorrow.

Here’s the how tonight’s starters stack up against each other. The rankings below the listed stat are out of 117 starters with at least 20 innings pitched. 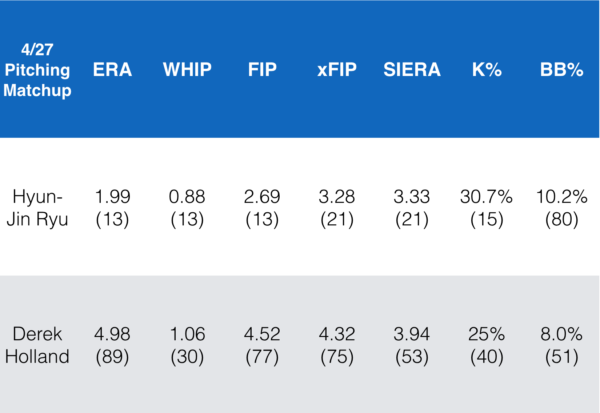 Ryu has arguably been the Dodgers best starting pitcher this season. He’s been top 20 in almost all meaningful pitching stats, and is coming off three straight terrific performances. Ryu has yet to face the Giants this year, but has been solid over his career sporting a 3.38 ERA, 1.38 WHIP, 3.03 FIP, and a .687 OPS allowed over 64 innings, which are all pretty much in line with his career norms. Holland started against the Dodgers in the third game of the season, where he allowed three runs on three walks and three hits over 5 innings. Holland is a pretty standard fastball, slider, curveball pitcher who tops out at around 91. 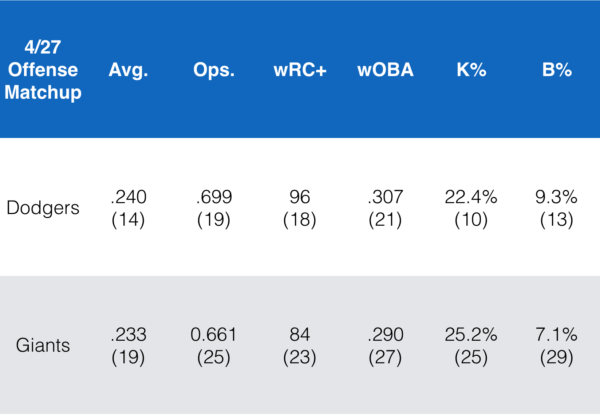 The tough part for the Dodgers tonight may be that Holland is a lefty, whom the Dodgers have struggled against this season. Against LHP, the Dodgers have posted an 80 wRC+ (22nd), a .282 wOBA (26th), and the fourth lowest OPS at .633. The Giants are tied with the Padres for the worst walk to strikeout ratio at 0.28, while the Dodgers are 14th at 0.41. The Giants haven’t been the worst offense in baseball by a handful of stats, but they have scored the fewest runs per game (3.2) of any team. The Dodgers have been middle of the pack in almost all offensive categories, and their runs per game back that up as well (4.5). The Dodgers should have an advantage on the mound and offensively tonight, which went poorly last time, but that’s just baseball.

Although it’s been widely understood and expected all week, Walker Buehler is officially starting the first game of the doubleheader tomorrow at 1:05 PT. This is the makeup game for the rain out on April 6, and Alex Wood will start the second game at 7:05.

Buehler will start the day game, as Dave Roberts earlier announced that Alex Wood starts the night game. Clubs are allowed a 26th man for double-headers, so Buehler's recall will not require a corresponding move.

After mixed reports, Justin Turner is officially back to hitting off a tee, and could be assigned to rehab games by the end of next week.

Also, I don’t know if April struggles are a thing for a franchise but…

An oddity: the Dodgers are 11-12 for the 6th time ever. Each of the first 5 times, they’ve recovered and gone to the postseason.

First pitch is scheduled for 7:15 PM PT on SNLA.

Just a guy living in Southern California, having a good time writing about baseball. Hated baseball practice as a kid, but writing about it rules. Thanks for reading!
@AllanYamashige
Previous The State of Things
Next Giants 6, Dodgers 4: A Season In A Nutshell