Max Muncy has been legitimately productive 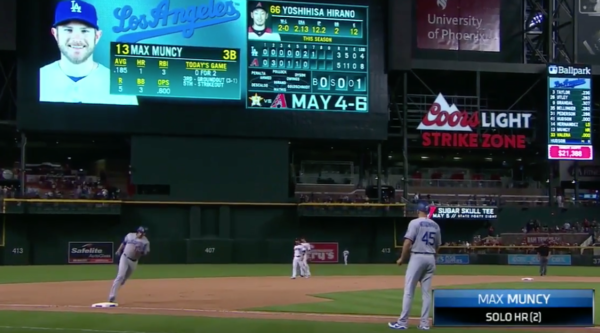 Logan Forsythe and Justin Turner are both expected to return tonight against the Marlins. Forsythe has been out 31 days with right shoulder inflammation, and Turner has been out 58 days since an inside fastball broke his wrist in Spring Training. Their veteran plate approach, production, and leadership have been missed. Their activation off the DL will in turn put two guys on the demotion bubble, with one potential odd-man out being Max Muncy.

Muncy has played in 21 of the Dodgers 40 games, and has racked up 63 plate appearances. His 112 wRC+ ranks fifth on the Dodgers, his .455 slugging percentage is fourth, and his .788 OPS is tied with Cody Bellinger for third. There have been 323 batters with at least 60 PA this season, and Muncy’s 112 wRC+ ranks 128th. While not incredible, that’s ahead of guys like Josh Donaldson, Christian Yelich, and Brian Dozier. He’s been perfectly servicable for what essentially amounts to a fourth-string option. Muncy has now accrued 308 PA over three MLB stints and he’s walked 38 times for a walk rate of 12.0%, including a 12.7% rate this year.

Last year, of all 144 qualified batters only 27 posted walk rates above 12%. Among those 27, only Jose Bautista (80) posted a wRC+ that was below the league-average of 100, and only two of those 27 posted seasons below 2.0 fWAR — Bautista (-0.5), and Shin-Soo Choo (0.8). The ability to work counts, identify good pitches to drive, and take walks are generally indicative of good hitters. It’s easy to take Muncy’s 12.0% walk rate in the MLB as a small sample size, but I think that’s inaccurate and a misrepresentation of his ability. Since he was drafted in 2012, Muncy has been consistently posting above-average walk rates across all levels of play. 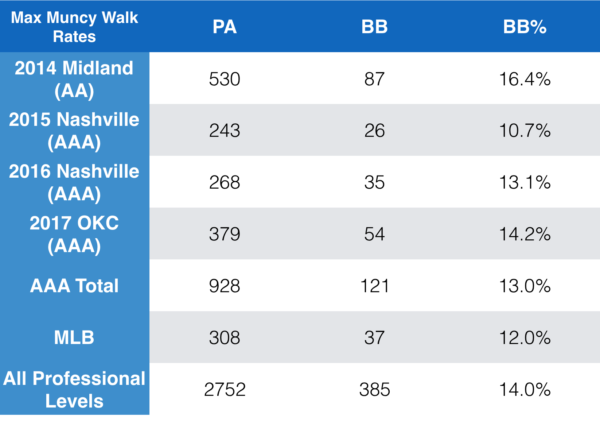 With over 2700 professional plate appearances, the 14.0% career walk rate indicates his ability to identify balls/strikes at a well above-average level. I don’t think his plate discipline is a fluke at all. There have been 371 batters to have at least 50 pitches thrown to them outside of the strike zone, and the league-average swing rate on these pitches is 17.6%. It’s important to clarify that this isn’t including pitches on the edge of the zone, these are balls that end up definitively off the plate. The best hitters lay off these pitches, and the worst hitters chase. Of those 371 batters, Muncy ranks 17th, swinging at only 7.9% of pitches he sees outside of the zone. He’s just behind masters of the strike zone in Joey Votto (4.6%) and Mookie Betts (7.9%). I think it’s safe to say that Muncy has a real skill that only a handful of MLB players actually have. There’s more to offensive value than the ability to walk, and that’s where Muncy is seemingly outclassed, and that’s perfectly fine.

Despite the fact that his plate discipline is his strongest skill, Muncy has a few other standout stats on the short season. He’s one of 46 batters with at least 60 PA that hasn’t produced an infield fly ball yet. He possess an average exit velocity of 90.9 MPH, which is 82nd of 379 batters with at least 25 balls in play — barely behind guys like A.J. Pollock and Justin Upton, and ahead of a few like Freddie Freeman and Nolan Arenado. That exit velocity is third on the team behind only Corey Seager and Yasiel Puig. 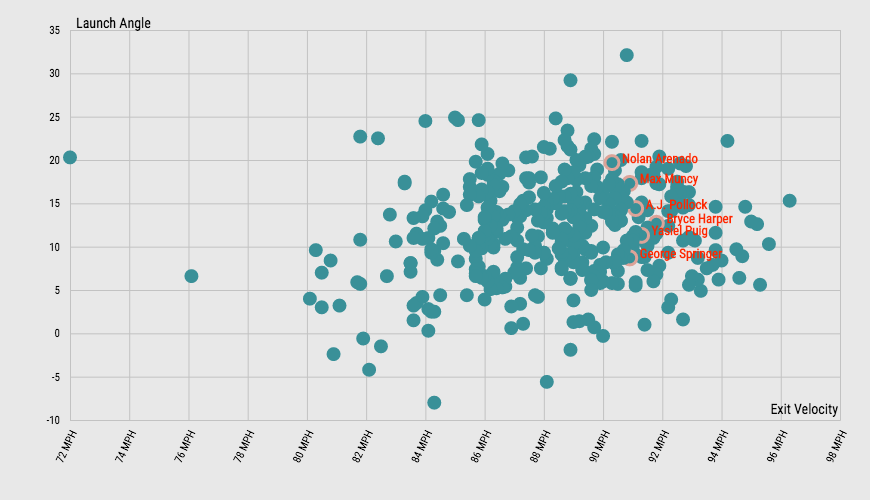 Additionally, his 17.3 degree average launch angle is identical to Mike Trout‘s, ranking 64th of 379. It’s doubtful he would want to be launching any higher as he likely doesn’t have the power — but the profile is promising of a guy looking to maximize on the power he does have. Lastly, of all 349 batters that have put at least 25 balls in play, Muncy has barreled 18.9% of the balls he’s put in play ranking 12th in the league.

The fact that a platoon bat like Max Muncy is one of the top offensive performers on the 2018 Dodgers is unfortunately part of why they’re 16-24, however in his small sample size I think he’s demonstrated enough to warrant the 25th spot on the roster. Personally, I hope that the activation of Turner and Forsythe result in Tim Locastro and Kyle Farmer going back to OKC. With the Dodgers currently carrying 13 pitchers, this would leave Chase Utley, Muncy, Enrique Hernandez, and Austin Barnes as the “bench” bats — two lefties and two righties as opposed to the four right-handed bench bats they have now. I think Muncy has a real skill that is valuable as a pinch hitter or bench bat, and hopefully he can continue to carve out a role with the Dodgers.

Just a guy living in Southern California, having a good time writing about baseball. Hated baseball practice as a kid, but writing about it rules. Thanks for reading!
@AllanYamashige
Previous 2018 MLB Draft Profile: OF Steele Walker, University of Oklahoma
Next Dodgers’ letdown of a season has team approaching a crossroads soon