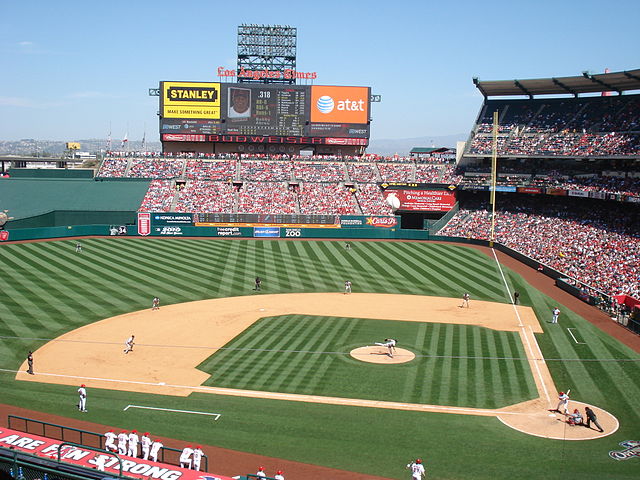 The Dodger bats have cooled off in Anaheim, but the Dodgers took game two behind another good outing by Ross Stripling. Tonight, the Dodgers close out the series in Anaheim on ESPN.

Alex Wood makes his team-leading 18th start of the season today. If he completes 6 1/3 innings tonight, he’ll be the first Dodger pitcher to 100 innings pitched this season. Prior to Stripling’s start last night, Wood was the lone qualified Dodger starter. He’s on a bit of a hot streak, as he has four wins in his last four outings and a 2.19 ERA in those 24 2/3 innings. After completing six innings or more in six of his first 13 starts, Wood has done so in each of his last three. He’s coming off a six inning, one-run outing against the Pirates, a 17-1 Dodger victory in which Caleb Ferguson recorded a save. In about 60 fewer innings this season, Wood has allowed only four fewer home runs than he did all of last season. He’s always been a good ground ball starter, but Wood has a sub-50 percent ground ball rate for the first time in his career this year.

Old friend Andrew Heaney gets the start for Anaheim in the finale. He was acquired by the Dodgers in the same deal that brought Austin Barnes and Enrique Hernandez to Los Angeles, but was quickly shipped to Anaheim for Howie Kendrick. Heaney has finally been healthy this season and is about 16 Major League innings from setting a new career-high. Heaney is one of only 14 pitchers this season with a complete game shutout, as he allowed one hit and one walk in nine innings against the Royals on June 5th. He’s had a bit of an uneven season and failed to complete four innings in two different starts last month. Last time out, Heaney held the Mariners to three runs in seven innings and struck out 10, which matched his career-high.

Hernandez and Barnes are both in the lineup against Heaney, as they usually are against lefties. Matt Kemp DH’s for the second time in the series. For the Angels, Shohei Ohtani is not DHing for the first time this series. He fouled a ball off his knee in the ninth inning last night, but he might have had tonight off against a lefty anyways.

The Dodgers set their rotation for their four-game set in San Diego, which begins tomorrow night.

He could return out of the bullpen, but this means Walker Buehler‘s earliest start would be at home next weekend against these same Angels.

Walker Buehler touched 97 mph during his sim game, Dave Roberts said. His next start will come before the All-Star break.

As this post goes up, ESPN should be just starting their All-Star selection show. I’m rooting for the Dodgers to be represented only by Stripling, Kemp and Max Muncy, because we all predicted that back in March.

I've been writing about the Dodgers since I graduated from Long Beach State, where I covered the Dirtbags in my senior year. I'm either very good or very bad at puns.
@@ac3581
Previous Dodgers 3, Angels 1: Ross Stripling stellar for 6 frames, pen shuts the door this time
Next Angels 4, Dodgers 3: Series dropped after Dodgers get out-donged by Angels