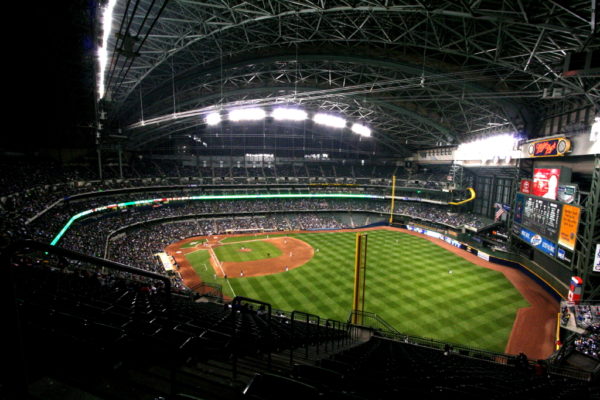 In Manny Machado‘s second game as a Dodger, Clayton Kershaw will be standing on the same baseball field at the same time. That’s pretty cool. Kershaw still hasn’t really found consistency since his return from the disabled list, either missing bats or having good control, but not both at the same time. It’s hard to tell if the break will help or if the layoff will make it harder to find consistency. Time will tell. In the meantime, Kershaw will have the added task of facing Ryan Braun (still not traded for Matt Kemp), who was activated from the disabled list today after missing two weeks with a back injury.

Kershaw will be facing Chase Anderson, who entered the all-star break on a hot streak. In his last five starts, Anderson has a 1.65 ERA, though it’s backed by a relatively spotty 27:10 strikeout to walk ratio in 27-1/3 innings. His FIP is over four over that, and his season has been rough overall. Anderson’s change has always been considered his best out pitch, though lately his curve has improved, holding batters to a .185 average and a .262 slug this year.

As a result of Anderson’s good change, it’s perhaps not surprising to see Bellinger as low as 7th in the order. Justin Turner is still out of the lineup, and at this point it seems dumb that they did not put him on the disabled list in the first place. Just remember that the Dodgers optioned Walker Buehler (who will thus require another year to reach free agency) under the guise of “roster flexibility.” Apparently that need for flexibility is … flexible.

Puig returning that quickly from an oblique injury would be pretty good news. Urias figures to compete for a bullpen role at this point, since there’s not enough time (or need) to ramp him back up to being a starter.

Daniel Brim grew up in the Los Angeles area but doesn't live there anymore. He still watches the Dodgers and writes about them sometimes.
@danielbrim
Previous 2018 Dodgers Prospects: REVISED Midseason Top 30 Prospects
Next Brewers 4, Dodgers 2: Terrible defense, frustrating hitting, bad baserunning … Dodgers did it all