After an impressive comeback last night, The Dodgers (56-44) look to secure their fourth series victory in a row with a win over the NL East leading Phillies (55-44). It won’t come easy as the Phillies will send their ace Aaron Nola (2.30 ERA/2.62 FIP/ 3.43 DRA) to the mound. Nola has been a top 10 pitcher in the league in almost every aspect, and it’s arguable that he’s been closer to top five. On the other hand, Kenta Maeda (3.12/2.78/3.42) is also having a career year. The Dodgers offense has been rolling as of late, so Nola will be a great test.

The team is running back pretty much the same lineup as yesterday which is somewhat of an anomaly for the 2018 Dodgers. Matt Kemp has been great offensively this year, but has produced significantly better against left-handed pitching with a 171 wRC+ compared to a 128 wRC+ against RHP’s. With his health, age, and injury history it makes sense to give him a day off against a right-handed ace in Nola. Alex Verdugo will start in Kemp’s place in right field. Logan Forsythe will get the night off as the team will likely need all the offense it can get against Nola. This year Forsythe sports a 75 wRC+ against RHP compared to Enrique Hernandez and his 121 wRC+. Grandal (234 wRC+), Taylor (180), Joc (336), and Muncy (214) have all been hot to start the second half of the season so understandably no changes there.

This pitching matchup is one of the best the National League has to offer. Nola has been incredible, while Maeda is one of the aces holding down this Dodgers rotation. There have been 109 SP with at least 80+ IP, here’s how these two matchup: 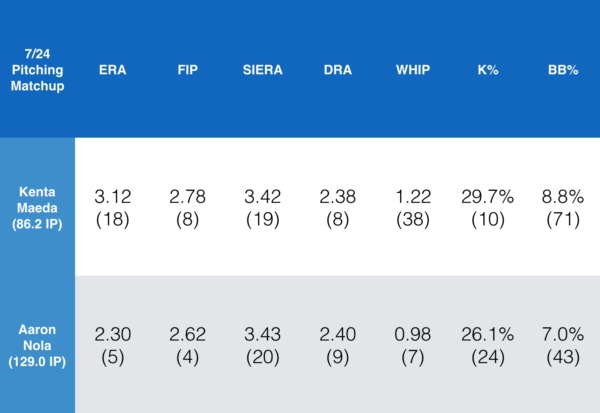 Meanwhile, there are a ton of injury updates: 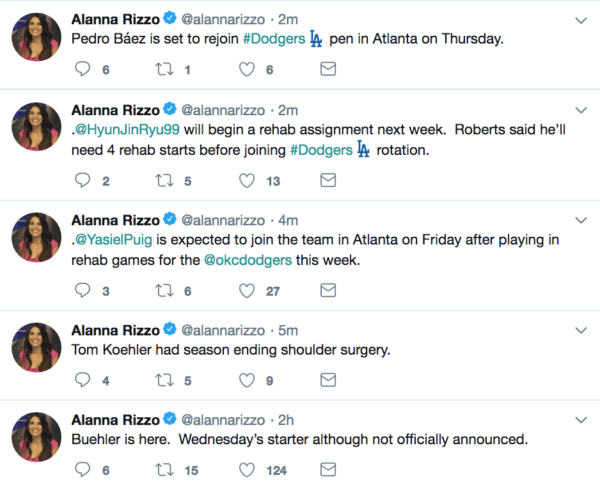 Pedro Baez, Yasiel Puig, and Hyun-Jin Ryu all seem to be progressing well as opposed to Tom Koehler who is now out for the season.

Also, the trade deadline is approaching so of course there’s news.

The #Dodgers would love to add a shutdown arm in front of Kenley Jansen. But with Tony Cingrani, Pedro Baez and Josh Fields on the way back from the DL, they think their bullpen should be better even without a major addition. "They're not going to overpay,'' said a source.

The Orioles are talking with a lot of teams about Zach Britton, including the Dodgers — and given that the Dodgers are working to stay under luxury-tax threshold, Yasiel Puig's inclusion (plus more) is one concept that has been raised to offset Britton's remaining salary.

Subtracting Yasiel Puig from the roster for Zach Britton would hurt but it would make sense for luxury tax purposes and because the outfield depth that the Dodgers have. I’d probably prefer to deal prospects only but that’s just my opinion.

Just a guy living in Southern California, having a good time writing about baseball. Hated baseball practice as a kid, but writing about it rules. Thanks for reading!
@AllanYamashige
Previous 2018 Dodgers trade deadline targets: RHP Jacob deGrom, Mets
Next Phillies 7, Dodgers 4: A 16-inning marathon ends with Enrique Hernandez pitching debut