We here at Dodgers Digest, like many others, assumed the Dodgers would add at least one reliever before the non-waiver trade deadline. Of the seven trade deadline pieces we (mostly Allan and Dustin) wrote, 14 names surfaced. All of them were pitchers, one starter and 13 relievers. Only two of those names got moved at all. The Dodgers did add a reliever, but it wasn’t quite the eighth-inning guy we all expected.

John Axford was not quite the guy we had in mind. Most rumblings leaned toward the Dodgers adding a younger, high velocity/spin rate type of reliever with team control. Instead, the Dodgers added a 35-year-old with a 4.41 ERA/4.02 FIP in 51 innings this year.

There is some positive to take away with Axford. He’s currently running his highest strikeout rate (23.7 percent) since 2015 and his 9.5 percent walk rate is his best since 2013. Axford is a righty, but he’s faced 78 left-handed hitters this season and they have a .145/.244/.309 triple slash against him. 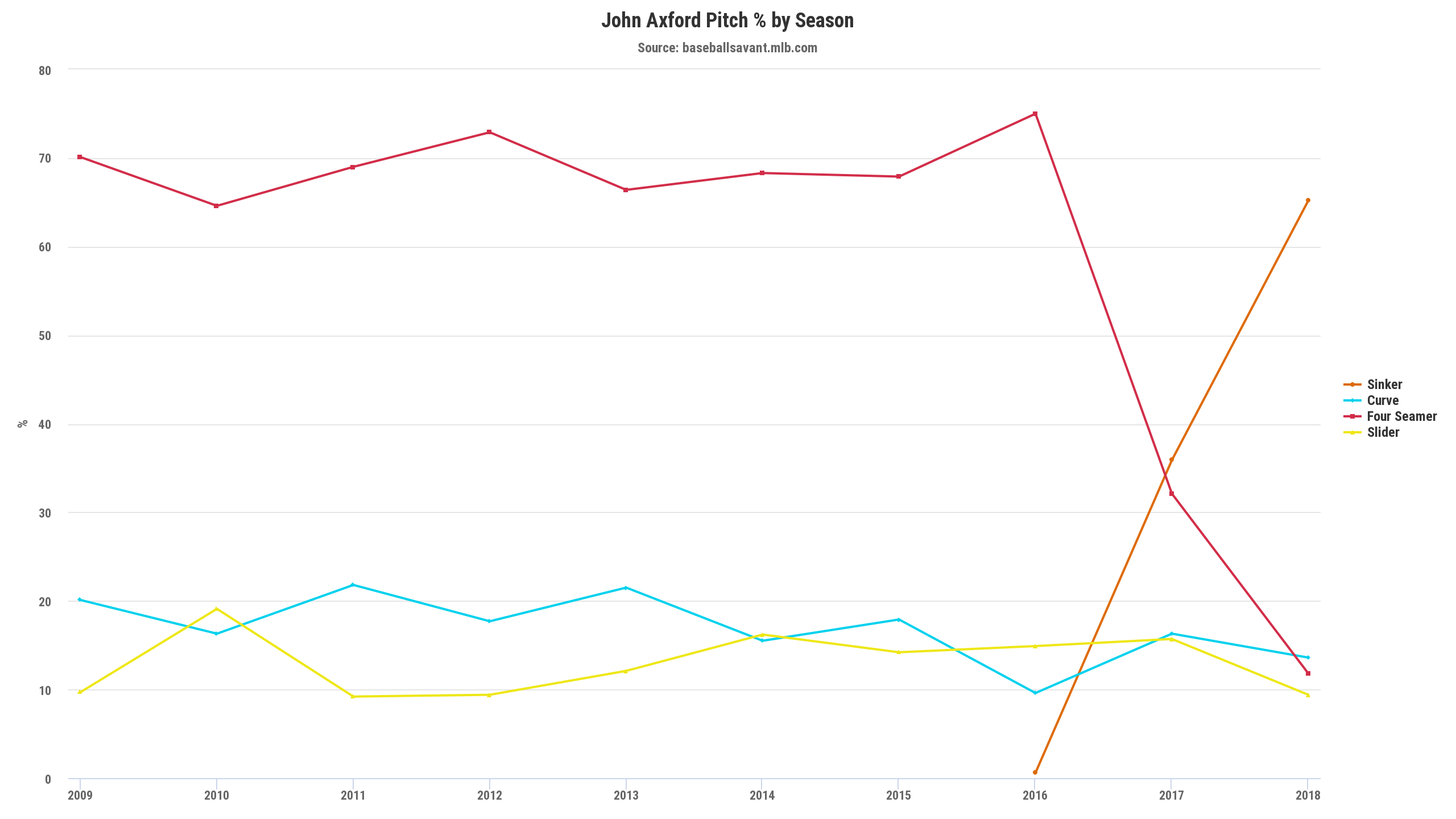 Baseball Savant classifies it as a sinker, some call it a two-seamer, but that pitch in orange has become Axford’s primary pitch over the last couple years. It averages 95.4 MPH so far this season. Sinker might be the proper classification as only Scott Alexander, Hyun-Jin Ryu and Adam Liberatore have a higher groundball rate for the Dodgers this season than Axford’s 53.3 percent.

Axford won’t and shouldn’t step into a setup role right away. However, he gives the Dodgers a solid option against lefties and another ground ball guy. He’s not the big acquisition that many were hoping for, but considering the cost and the other additions the Dodgers have made (Brian Dozier and literally Manny Machado), the team is better than they were a few weeks ago.

Only one prospect is heading to Toronto, Corey Copping. Copping was ranked 61st on Dustin’s preseason Top 100. Here’s his writeup:

Copping was the Dodgers’ 31st-rounder in 2015 out of the University of Oklahoma. His career trajectory has been normal, but what isn’t normal is his strikeout rates. They’ve declined in each of his three seasons, bottoming out at 20.9 percent this season with Tulsa. This is after he was a Driveline Baseball participant to help increase his velocity. It worked temporarily — he sat in the 92-94 MPH range — but he was back down in the 90-92 MPH range last season. Without a plus breaking ball, he might have reached his peak as a prospect. He was No. 60 last year.

Copping was promoted to Triple A-OKC earlier in July and has been pretty solid out of the bullpen. In 53 2/3 innings between OKC and Tulsa, Copping has a 2.52 ERA and 59 strikeouts. He’s walked 26 batters and owns a 1.304 WHIP. The 24-year-old Pasadena-born righty probably has a better chance of making the Majors in Toronto than Los Angeles in the future.

Pretty disappointed if the only reliever the Dodgers get is Axford. Dodger front office deserves some benefit of the doubt on that class of reliever, but there were plenty of non-projects around for not that much prospect cost

This tweet is the start of a thread from Brim which pretty much matches my stance on this. Axford is underwhelming and it’s tough to say how much better the bullpen is because of this. It’s easy to say the bullpen will be fine once Alex Wood, Ross Stripling, and (hopefully not) Kenta Maeda are moved there, and once Julio Urias, Josh Fields, and Tony Cingrani come back healthy, but that’s a lot of ifs. Considering how inexpensive Keone Kela and Jake Diekmann were for Pittsburgh and Arizona, respectively, it leaves a bit of a sour taste to know how attainable they were.

I've been writing about the Dodgers since I graduated from Long Beach State, where I covered the Dirtbags in my senior year. I'm either very good or very bad at puns.
@@ac3581
Previous Dodgers acquire Brian Dozier from Twins for Logan Forsythe, 2 prospects
Next Brewers @ Dodgers July 31, 2018: Dozier is a Dodger; Buehler looks to bounce back