Following last night’s victory, the Dodgers are looking for a quick two-game sweep of the Oakland Athletics. Oakland came into last nights game on a six-game winning streak and having won 12 of their previous 15 games, so a sweep would be a nice result for the Dodgers. Arizona already beat the Phillies today, so the Dodgers are currently in a tie atop the NL West standings. 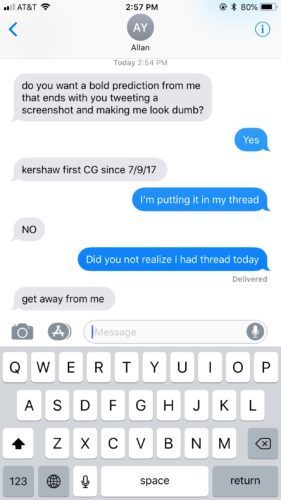 Kershaw is coming off a solid start against the Brewers last Thursday, during which he allowed five hits and two runs while striking out seven over six innings. It was a pretty low-pressure start, as the Dodgers scored 10 runs during his six innings (and 11 runs in the final three innings) in their 21-5 victory. That marked Kershaw’s sixth consecutive start completing at least six innings, a feat he has done in 12 of his 16 starts this season. Kershaw’s last complete game was almost 13 months to this day, and Kershaw hasn’t completed eight innings since last September 24. Follow your dreams, Allan.

Fiers was a post-July 31 waiver acquisition from the A’s, who snagged him up from the Detroit Tigers for two players to be named later. The Tigers are a tire fire this season, but Fiers posted a 3.48 ERA in 21 starts/119 innings for them. Also, somehow at 47-67, the Tigers are in third place in the AL Central. The White Sox and Royals are bad.

Fiers lasted only two innings in his last outing August 1 against Cincinnati due to a bruised shin. He had been on a hot streak before then, tossing six or more innings in his previous six starts and allowing a total of nine runs. Dodger fans might have unpleasant memories of Fiers, who played for the Astros for two and a half years before joining the Tigers this year. Fiers wasn’t active during last years’ postseason, but in his fourth start with Houston after the 2015 trade deadline, he threw his only career no-hitter and struck out 10 against the Dodgers.

Justin Turner gets his turn to DH today in an AL ballpark. Yasmani Grandal, Joc Pederson and Max Muncy are all back in the lineup with a righty on the mound for Oakland.

Hyun-Jin Ryu could rejoin the Dodgers this weekend.

Ryu went 5/71 in his rehab outing. Will likely throw again Sunday. It hasn’t been determined if it’s with #Dodgers or @okc_dodgers.

Ryu started for Triple A-OKC last night in Reno and allowed five hits and one run over five innings.

#Dodgers Alex Wood threw 3 simulated innings to hitters this afternoon. No sign of adductor muscle issue that had been bothering him. Will throw bullpen in a couple days, evaluated for return to rotation at that point

Wood’s injury didn’t seem to be too serious in the first place, so it’s good to know he’ll be back soon.

With a four-man rotation of healthy starters and three more starters nearing return, the Dodgers will have to get creative.

Even with imminent returns of Wood and Ryu, Roberts said the #Dodgers would "probably not" consider a 6-man rotation. "Some tough decisions coming."

Ross Stripling‘s return on Thursday will make this more complicated, as the Dodgers will have seven starters for five rotation spots. Throwing a couple guys in the bullpen could strengthen that area of the team. Ryu’s return will also require a 40-man spot, as will Julio Urias‘ if he returns this season. Dustin wrote about not counting on Urias too much this season out of the bullpen given some suboptimal reports from his rehab.

And even though he’s not playing tonight, Enrique Hernandez should definitely don the tools of ignorance at some point this season. Oh, and we have a shirt for that. 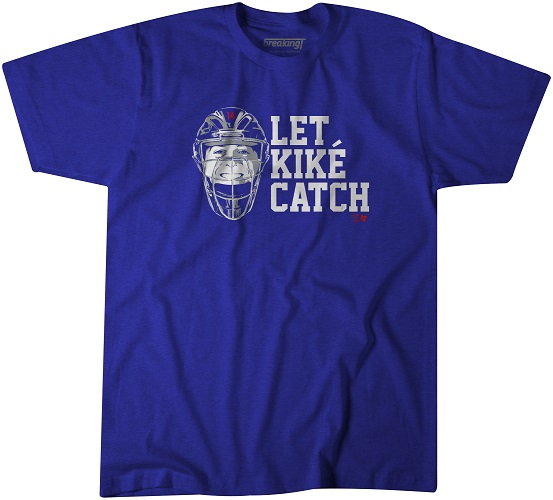 Let him do it!

I've been writing about the Dodgers since I graduated from Long Beach State, where I covered the Dirtbags in my senior year. I'm either very good or very bad at puns.
@@ac3581
Previous Luxury tax concerns could limit Dodgers’ trade options in August
Next Athletics 3, Dodgers 2: Yasmani Grandal’s failure to catch costs Dodgers late