Diamondbacks @ Dodgers Sep. 2, 2018: Buchholz vs. Buehler for the division lead 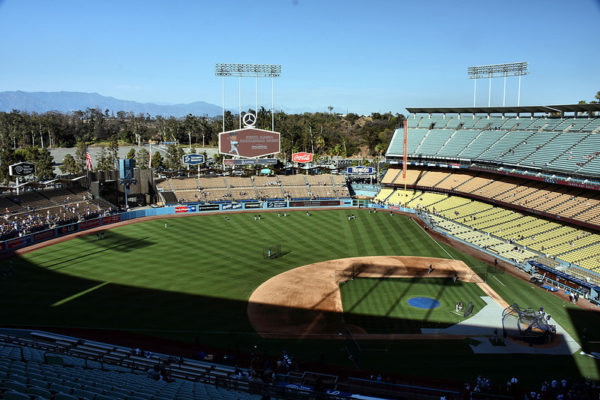 Late inning heroics in two straight games have the Dodgers tied for the division lead with the Diamondbacks. That’s 4.5 games they’ve made up in the span of a week. Today they’ll go for sole possession of the division for the first time since August 7. Arizona won’t make it easy, as they’ll send a resurgent Clay Buchholz to the mound against rookie Walker Buehler. A win today would really benefit the Dodgers, as Arizona is heading into a two game series against the Padres, while the Dodgers are slated to face the NL Cy-Young favorite and potential MVP Jacob deGrom tomorrow.

The Dodgers switch things up a bit, getting Cody Bellinger, Max Muncy, and Yasmani Grandal back into the lineup. Buchholz doesn’t really have any platoon splits, and hasn’t over his career, but those hitters do which justifies them sitting against Corbin and starting today. For the Diamondbacks it’s a pretty similar lineup as yesterday, the main difference being Dodger-Killer Daniel Descalso being in the lineup. He has a 195 wRC+ and a 1.149 OPS against the Dodgers this year in 34 plate appearances. I’m terrified.

Here’s how Buchholz and Buehler matchup out of 134 starters who’ve thrown at least 80 innings this year (excluding the one inning, five earned run relief appearance by Buehler): 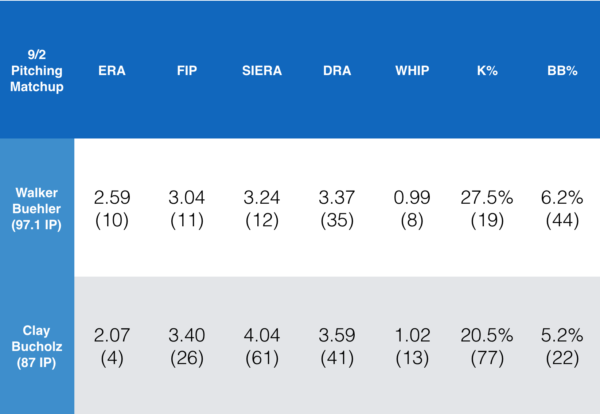 Buehler is coming off a mediocre start by his standards, going only four innings while allowing four hits and two runs against the Rangers. Since July 31, Buehler has a 1.49 ERA over six starts and 36.1 innings. That ERA is the ninth lowest mark in the league to go along with a 29.8% strikeout rate (15th), 0.94 WHIP (16th) and a 23.3% soft-contact rate (15th). Turns out Walker Buehler is good, who knew?

Buchholz was pretty good from 2010-2015 with the Red Sox, where he started four postseasons games in the Red Sox 2013 World Series Championship. 2015 was his most recent above average season, and arguably his best overall, posting a 3.26 ERA and a 2.68 FIP in 113 innings, good for 3.2 fWAR. He followed that up with a bad 2016, with a 4.78 ERA and a 5.06 FIP in 139 innings. He missed nearly all of last year with the Phillies with a torn flexor tendon in his right forearm. He’s 34 now, but he was a two time all-star with Boston, and at his best he was very talented.

Buchholz has outperformed his FIP by 1.33 points, which is the second largest differential in the league. His 86.5% left on-base rate is second only to Blake Snell, helping explain the differential between his FIP and his ERA. He’s also pitching in front of the best defense in the league by DRS (+102). He doesn’t strike many guys out so you’d think to perform as well as he has he’d limit hard contact which hasn’t exactly been the case. His 38.2% hard-contact rate is the 43rd highest, above the league-average of 35.5%, and while not terrible, that’s not exactly the profile you’d expect with someone with the fourth-lowest ERA in the game. Maybe he allows some hard-contact, but has been really good in generating soft-contact? Again, that hasn’t been the case with the 17th lowest soft-contact rate in the league at 15.4%, below the league-average of 18.1%. All signs point towards regression, but still he has a 0.39 ERA and a 2.72 FIP over his last three starts, allowing only one run in 23 innings.

Honeycutt also said he’ll throw a LIVE BP session at some point before being activated off of DL. That activation will likely be during #Rockies series 9/7-9/9. https://t.co/Lu6ssyxUpM

Ross Stripling looks to be close to returning, and obviously the more good pitchers the Dodgers have for this postseason push the better.

Catcher Rocky Gale is in the clubhouse.

Austin Barnes is now officially half as good offensively as he was last year with a 71 wRC+ this year compared to a 142 last year. Rocky Gale is a 30-year-old AAAA catcher with 2701 professional plate appearances with only 20 of them in the MLB. He has a .689 OPS this season with Oklahoma City, but that still is over 100 points higher than Austin Barnes (.587). There will have to be a corresponding 40-man roster move to activate Gale. Kyle Farmer is also up, and he has a .785 OPS in AAA this year. The issue there is that Farmer has played 356 innings at positions other than catcher this year, compared to only 248 innings at catcher.