The lineup decisions are not a problem for the Dodgers 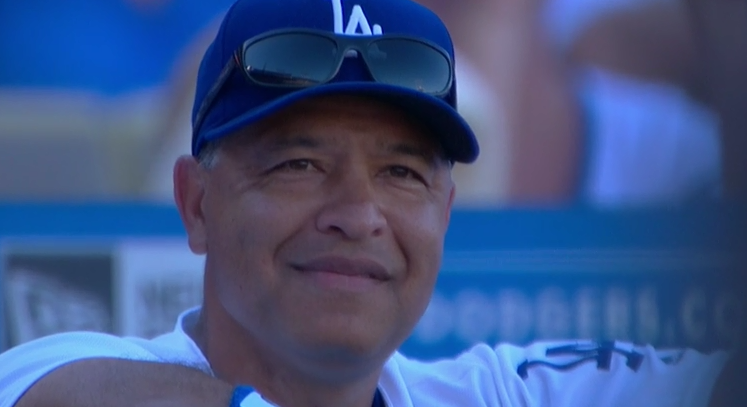 Every time a lineup results in the offense struggling, Dodgers fans are ready to take to the streets over the choices. In general, the gripe tends to boil down to taking issue with platoons, both the usage of it and how it’s been deployed. This is constantly a thing among certain parts of the fandom, but the sentiment has been so overwhelming lately that I decided to dig into it a bit instead of just litigating it anecdotally on social media, where facts are loose and the takes are hot.

Well … it’s interesting what can be found when one takes a step back to look at stuff like this. 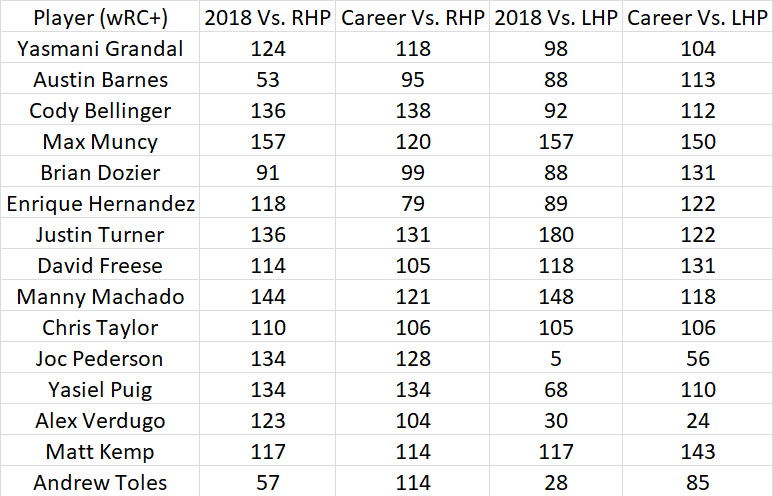 What is the optimal lineup at the moment that can be put together based that information?

That’s … rather close to what they’re doing right now.

Muncy stands out as a potential boon to the lineup that seems underutilized at the present. He’s pounding both righties and lefties, and while the sample size is too small to say he’s legit in both respects, it’s fair to say he has earned the shot to prove himself. Muncy should basically always play against righties, and while there are defensive concerns to consider, he could either start at second over a struggling and maybe hurt Brian Dozier or at first over Freese (and definitely whenever JT has to rest).

That’s kind of where my case to make changes ends, honestly.

Grandal should start every game given how the year is going for Barnes, but one thing that jumped at me is that Barnes isn’t significantly worse than Grandal against lefties whether just this year or in the big picture. Considering that Grandal has to rest a lot as a catcher and is prone to elongated slumps where he looks completely lost for stretches (like … now), it’s not completely ridiculous to play Barnes against southpaws, especially if you have complained about Grandal’s defensive issues (framing aside).

Hernandez is an interesting case because he actually isn’t hitting all that well against lefties this year. However, starting him makes sense because since August began he has the hot bat with an .860 OPS, and given that he has historically obliterated lefties he’s likely their best chance at getting another big bat in the lineup.

As far as Bellinger goes, while I agree that he should get a chance to prove himself against southpaws in the big picture, right now might not be the ideal time for him to work through it. While people act like he’s been denied a chance to get in rhythm or whatever, he’s basically received the same amount of chances against lefties throughout his whole career until this point, and the only reason he started seeing the bench recently is because he has a 57 wRC+ against them since the All-Star break. 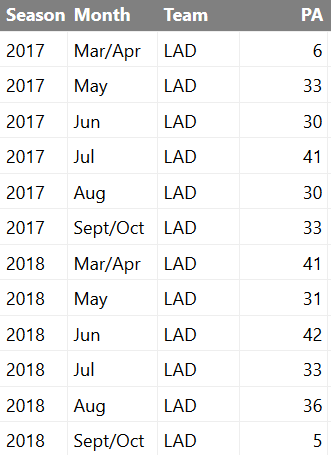 Puig is actually in a similar situation since he has a reverse split. It’s weird because he had a monster year against lefties in 2015, but since then he has a .217/.302/.364/.666 line and a 79 wRC+ in a not-insignificant 411 plate appearances against southpaws. While many fans also claim that Puig hasn’t been able to find his rhythm, he has received consistent playing time against them aside from whenever he’s missed time due to injuries, and has seen the bench recently because he’s posted a 54 wRC+ against lefties since the All-Star break. 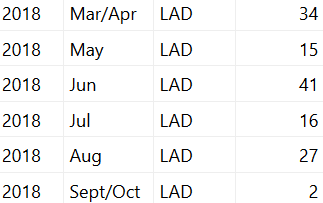 The reality is that a lot of the slumps guys are going through right now are … horrific. You remember Barnes, right? The fan punching bag of this season? His wRC+ on the year is 72. Every player (except Muncy) that has lost playing time lately has been worse than that after the All-Star break for some extended period, either in general or for a platoon split. The Dodgers didn’t just decide to reduce their roles for no reason, the players earned that shit themselves, and their struggles have likely played a part in the issue developing to begin with.

All that said, obviously one could argue for taking a chance on talent and defense with Bellinger and Puig, basically hoping they reverse their trends. I get that because I went into doing research for this expecting to prove they are clearly superior options to guys like Kemp and CT3, who have had their own struggles lately. However, the evidence actually pointed the other way, and if the best good-faith argument one can make is that all the options suck, then it’s a reach to pretend the struggles stem from the lineup choices themselves. And if we’re relegated to basically guessing, then I’d rather trust the judgment of those with the most information on the players, which is not gonna be the fans.

Going into 2018, the Dodgers were surely hoping that guys would emerge (probably Bellinger and Puig) as the type of hitters that wouldn’t necessitate platooning (like JT and Macahado … and Corey Seager), and they did let struggling players try to prove themselves. However, as things have gotten down to the stretch run, Dave Roberts has opted to instead just play his best hand and for the most part I believe he has.

So not only is there sparse evidence to label the lineup decisions of the Dodgers “stupid” or “stubborn” or “malpractice”, but after I dug into how things have actually been instead of just relying on how I perceived them, the team seems to be doing exactly what people have calling for in terms of playing who is producing in the moment. And if that’s not good enough, then the lineup selection certainly isn’t the problem here.