After a very disappointing 6-10 loss last night, the Dodgers are now 0-5 against the Reds this year. If the Dodgers had swept the season series until this date, they would be 83-61, 3.5 games ahead of the Colorado Rockies. This would make the reds 57-88 which would tie them with the Padres for the worst record in the NL. Unfortunately as we all know, the Dodgers have lost all five games they have played against the struggling Reds. The team looks to get back on track today, as they’re nearing “must-win” territory. They’re currently 1.5 games behind the Rockies with only 18 to play, and they’re also about to go into a four-game series with the 80-64 Cardinals who are currently leading the Dodgers by two games in the Wild Card race.

There are some notable changes in the lineup, with Justin Turner getting the night off. Roberts notes that it is just for rest purposes, and we’ll definitely need him to be fully rested and healthy for the final 17 games. Manny Machado will start at third in his place, while Chris Taylor slides over to short. Verdugo is starting in center today instead of Enrique Hernandez who would usually start here. This might be rest for Hernandez, or it could be prioritizing the plate discipline and bat-on-ball skills. Verdugo hasn’t exactly translated it to the MLB level yet, but he hit .329 this year in Triple-A, with a 9.0% walk rate compared to a minuscule 12.4% strikeout rate. Max Muncy starts over Brian Dozier who is slashing .109/.180/.196 with a 6 wRC+ (94% worse than league-average) over his last 50 PA. Muncy is essentially what people thought Willie Calhoun would be at second base, but at this point in the season the Dodgers desperately need his bat in the lineup.

The Reds will be sending the 25-year-old hard throwing Luis Castillo, against Hyun-Jin Ryu who has been exceptional in his limited innings this year. Ryu won’t qualify for any pitching statistics, so the following ranking is out of 103 starters with at least 110 innings this year. Ryu is placed where he would rank if he qualified. 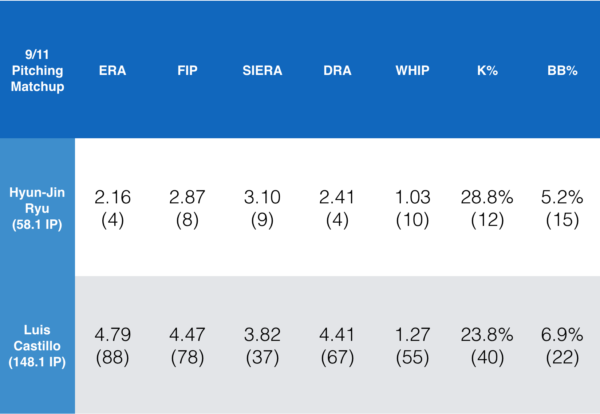 You would think that as a pitcher in the most homer friendly park, the average pitcher would typically have a higher ERA/FIP at home versus on the road. However, Castillo has what I guess you might call reverse park splits. He performs significantly better at his homer prone park than he does on the road. At home, he has a 3.69 ERA/3.85 FIP, allowing an .824 OPS and a .296 wOBA. On the road, he has a 5.94 ERA/5.11 FIP, allowing a .697 OPS and a .353 wOBA. Castillo has logged the most innings of any starter for the Reds and has the second lowest FIP (behind Matt Harvey), and the lowest xFIP at 3.71 on the team. xFIP is typically a relatively useless stat as it essentially says, here’s what a certain pitcher would look like if he were better at not allowing homers, which is a very important skill for pitchers. However, for a pitcher who pitches at the most homer friendly park in the league, xFIP can be decently useful. Castillo has a 3.85 FIP at home and a 3.15 xFIP, showing even further how well he performs at home. He is however, coming off of an outing at home against the Padres where he allowed three home runs in just five innings.

Ryu on the other hand, has dropped the usage of his fastball to just 29.9%, and increased his usage of his cutter to 25.2%. The results have been incredible to date, as Ryu has posted personal bests in every meaningful category. The Dodgers should have the clear advantage in starting pitchers, which based on the way the 2018 Dodgers have performed is a very bad sign.

Here is Dave Roberts explaining why Turner is out of the lineup today.

Don't panic. Justin Turner is just getting a night off before a day game and Dave Roberts said he'll probably start every game until the end. Taylor at SS, Machado at 3B.

Ross Stripling will start tomorrow for the first time since August 9, which obviously, will definitely go well.

Ross Stripling is returning to the rotation to make a spot start against the Reds tomorrow.https://t.co/7RkyAQStbv pic.twitter.com/T4JwUmj0W4

Just a guy living in Southern California, having a good time writing about baseball. Hated baseball practice as a kid, but writing about it rules. Thanks for reading!
@AllanYamashige
Previous 2018 Dodgers Digest All-Prospect Team
Next Reds 3, Dodgers 1: Literally the Cincinnati Reds