After a crucial sweep against Colorado, the Dodgers hold a 2.5 game lead in the NL West. They’re currently winners of 19 of their last 30 games (.633), and it’s looking more and more likely they reach the postseason for the sixth year in a row. They start the three game series against the Padres (61-92) with Ross Stripling taking the hill against rookie lefty Eric Lauer. Initially Rich Hill was slated to start, but if Hill is pushed back one day he gets to skip pitching against the Diamondbacks next week. This is noteworthy because Hill has a 9.64 ERA against Arizona this season, allowing 15 runs in 14 innings with a 1.061 OPS allowed. Outside of those starts, he has a 3.27 ERA allowing just a .674 OPS. To further increase their playoff odds, they need to take advantage of being able to play teams like the Padres.

There are 126 starters who’ve logged at least 100 innings, and here’s how Stripling and Lauer matchup: 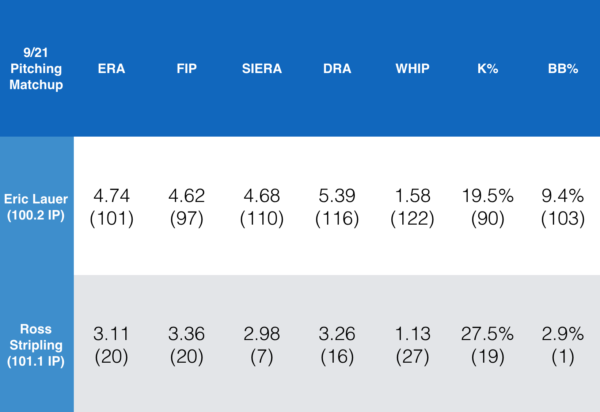 *These don’t include Stripling’s 15 innings in relief.

Stripling has gone 3.1 innings in each of his last two starts since his return from the DL. He threw 51 pitches in his first start and 72 in his most recent. He’s allowed four earned runs over those 6.2 innings, but his strikeout rate and walk rate seem to be where they were before he went on the DL which is nice to see. He’s allowed a .256 average this year which is actually 88th in the league —— relatively surprising for a pitcher as successful as Stripling. Part of the reason he’s been so successful is his improvement in generating strikeouts. The other is being able to limit his walks. Stripling has walked only 12 batters as a starter with 113 strikeouts. That’s how he’s able to keep his WHIP so low and limit damage. Hits happen, and it’s tough with so many great hitters in the league, but walks are relatively controllable and one of the most important assets a pitcher can have. Allowing free baserunners is a recipe for disaster.

Lauer the 23 year-old left hander has a chance to be a decent rotation piece someday, but he hasn’t been good in his rookie season. That’s totally normal and he’ll likely improve moving forward, but today that just means the Dodger batters should be ready to take advantage. Lauer allows a .288 batting average which is the fifth highest mark in the league, however he has been better as of late. He’s allowed just a .669 OPS in the second half compared to .853 in the first half. Still, over that stretch he has a 4.30 ERA/4.76 FIP. He’s primarily a three pitch guy featuring a fastball that sits 90-93, mixing in a slider and a curveball. The Dodgers should have the pitching advantage relatively easily, but they typically have a difficult time performing against mediocre pitchers.

The Dodgers rotation for the remaining eight games is still up in the air, which isn’t exactly a surprise.

Dave Roberts said Rich Hill was getting an extra day on both ends, plus a “little bit of matchup component” (not facing Arizona) in moving his start to Saturday.

Asked if Stripling would be available in bullpen later next week, Roberts wouldn’t commit that far ahead

This is a nice gesture by the Dodgers organization recognizing some long-time legends.

Dodgers will have an official induction ceremony and on-field recognition for Newcombe, Valenzuela and Garvey, plus each will have a permanent plaque on display at Dodger Stadium

Billie-Jean King and Ilana Kloss have now become co-owners of the Dodgers which is pretty cool.

First pitch is at 7:10 PT on SNLA and MLB Network.

Just a guy living in Southern California, having a good time writing about baseball. Hated baseball practice as a kid, but writing about it rules. Thanks for reading!
@AllanYamashige
Previous How the Dodgers ended up fighting for a playoff spot in September – Part 1
Next Padres 5, Dodgers 3: Eric Lauer for the third time in 2018