After a much better showing last night than the game prior, the Dodgers (86-69) remain 1.5 games ahead of the Rockies (84-70). In the rubber match, the Dodgers send Hyun-Jin Ryu against left-handed Joey Lucchesi. It’s Matt Kemp‘s birthday so it would be nice for him to go 5-5 with homers.

The Dodgers are rolling out with the lineup that best combats the splits of Lucchesi. He has a 2.65 FIP against left-handed batters compared to 4.42 against right-handed batters. He’s also allowed just a .629 OPS against lefties, well under his .776 mark against RHB.

Among 102 starters that have thrown at least 120 innings, here’s how Ryu and Lucchesi matchup. Again, this is where Ryu would rank if he were qualified. 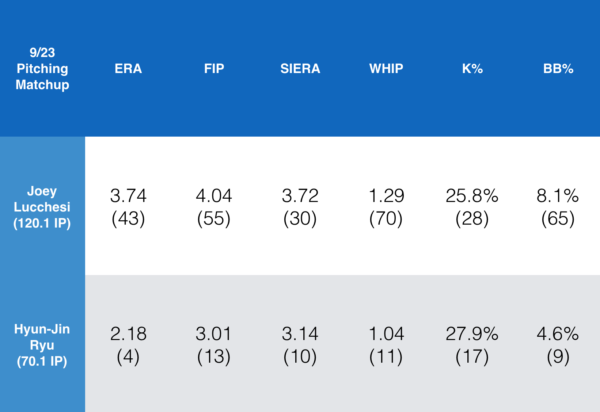 Lucchesi hasn’t been incredible, but the 25 year-old lefty is easily the best pitcher on the Padres. He’s a high strikeout guy, which tends to be a bad matchup for the Dodgers offense at times. He hasn’t been as strong in the second half with a 4.34 ERA since July 29. He’s a fastball, changeup guy with the heater sitting 90-92 MPH.

If you’re subscribed to The Athletic, read this to get more info on tweaks that Kenley Jansen and Rich Hill have made. Hopefully it bodes well for the future.

A tweaked delivery for Kenley Jansen, a new curveball grip for Rich Hill as the Dodgers are fine-tuning themselves for a possible October run. https://t.co/K0qgh7UFYV

Just a guy living in Southern California, having a good time writing about baseball. Hated baseball practice as a kid, but writing about it rules. Thanks for reading!
@AllanYamashige
Previous Dodgers 7, Padres 2: Dodgers demolish Padres, break franchise record with 222 dongs in a season
Next Dodgers 14, Padres 0: Bats explode behind Machado, Kemp … Barnes, as Ryu dominates