Austin Barnes had his biggest Game 5 moment in the 3rd inning, not the 5th 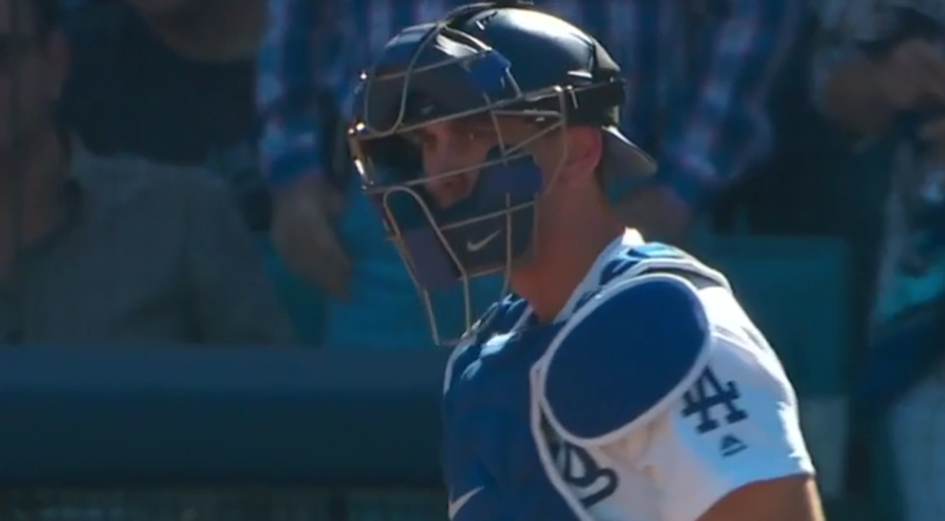 Austin Barnes came up big in yesterday’s Game 5 of the NLCS, driving in a run the Dodgers desperately needed in the 5th inning with a single up the middle to tie the game at 1-1. It deserves to be talked about as a runner on third with less than two outs is a situation the Dodgers have failed in so frequently this series, postseason, and year, but his heroics in the 5th might not have even been his biggest contribution towards winning the pivotal contest.

Two innings prior to Barnes coming through with the bat, Clayton Kershaw was scuffling a bit in the 3rd. He struck out Erik Kratz to start, but followed by surrendering a clean single to Orlando Arcia and then walking the pitcher Brandon Woodruff. He then almost immediately allowed a ringing double to Lorenzo Cain to surrender his first run of the game and put runners at second and third with one out and the heart of the Brewers order due up.

The moment seemed pivotal at the time and proved to be the difference in the game, as it was one of the only scoring chances the Brewers would get and it was a chance to blow the game open early. Make no mistake, Kershaw deserves all the credit in the world for settling down and coming up clutch with a strikeout of Christian Yelich, carefully pitching around Ryan Braun, and then striking out Jesus Aguilar to end it.

That said, the contributions of Barnes behind the plate went largely unnoticed, primarily because as a catcher he simply did his job. But his performance set in contrast to that of the one Yasmani Grandal turned in with Kershaw on the mound in Game 1 was especially noticeable.

Barnes started his sequence in the 3rd by preventing a run from scoring during the Yelich at-bat on an errant slider in the dirt.

Barnes also had an easy one during the Braun at-bat, which definitely should be routine but were anything but in Game 1. Those were almost the exact types of balls Grandal missed on, honestly.

He then saved his best for last, as on the verge of getting out of it with an 0-2 count on Aguilar, Kershaw bounced a slider that was also off the plate inside and forced Barnes to move quickly to save a run.

While true that those are plays quality backstops should make most of the time, they’re noteworthy because we know what happened to Grandal with Kershaw on the mound in Game 1 of the NLCS. That’s not meant to bag on Grandal further, because god knows Dodgers fans are doing enough of that right now to last a lifetime (me included), but it’s to point out the types of anonymous plays behind the plate that Barnes has been making that are absolutely difference making.

Who knows what happens if the Brewers get up to 2-0 or 3-0 there on a couple wild pitches or passed balls? Does Kershaw get frustrated and let it snowball? Is Counsell motivated to go get Woodruff out of the game earlier? Do the hitters start to press even harder and fail to mount their second-half rally? We’ll never know now, and we have Austin Barnes to thank for it.